Somehow, The French Manicure Has Managed To Follow Us Into 2020

Kim Kardashian, Beyoncé and Bella Hadid are just three of the celebrities who are reviving the French manicure, the once-heinous trend you might remember sticking to your cuticles from packs of five. 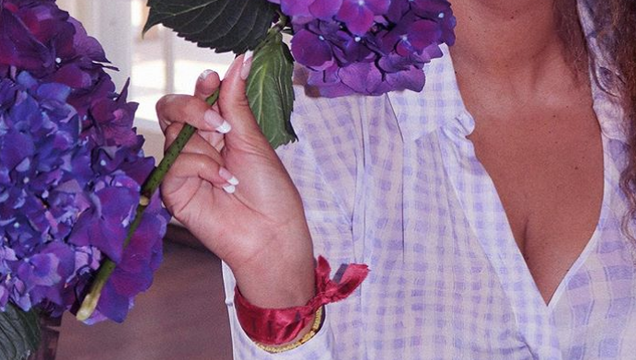 History is happening all the time.

Sometimes it whooshes right past you without feeling it at all. And other times it's more potent and defining than simple words could articulate.

The latter refers to right now; when an updated version of French manis have (somehow) entered the zeitgeist as some sort of main character of the chaos we call 2019.

We've written before at length about how nostalgia has grown to be one of the most prominent trends of late, but with the anti-fashion climate we've surrendered to (Dadcore, anyone?) we're not sure whether to embrace the white-tipped vintage or dismiss it as poetic irony.

The Clueless-inspired nail look will ring true with anyone who remembers punts. Especially those who used this antiquated currency to purchase a multi-pack from their local pharmacy for £4.99.

The keratinous equivalent of sheer hosiery in the 50s and tendril curls in the 90s.

For some, their reincarnation is coming way too soon, considering French-tipped nail adhesive packs are still plentiful in suburban towns, but for others, it harks back to a simpler pre-Instagram era where Buffalo runners ruled and pan stick was in vogue.

The escapism-led revival has been seen on everyone from Ariana Grande to Bella Hadid and has even been customised to within an inch of its life.

While the traditional, sheer pink, white-tipped mani is still very much present, the style has now been toyed-with, curated and even flipped, alluding to its endless possibility allure.

While 2019 has proven itself as the steadfast pinnacle of smash and grab revivals, the French manicure acts as a white flag for those who are not quite ready to dig out pedal pushers and jean chain of yore.

In the interest of inner peace, forgive yourself of former trends and grab the white nail polish.

READ: Dear Derm: What Is The Worst Thing You Can Do To Your Skin?

READ MORE: The Key To Brighter, Blonder And Brass-Free Hair Resides In This Post