It's #NationalLipstickDay, Here's A Quick Lesson In Red Lipstick History

A brief rundown of the makeup item and it's power to shield, embolden and transform. 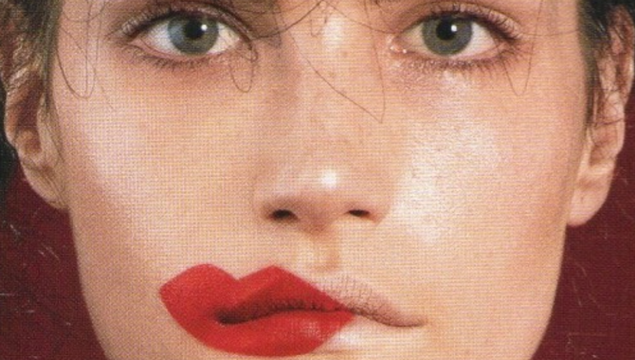 If diamonds are a girl’s best friend, red lipstick is her fearless ally.

There's something undeniably special about red lipstick and it's power to shield, embolden and transform.

From ancient Egypt’s Cleopatra to Alexandria Ocasio-Cortez, the history of red lipstick is a meandering tale of power, death, rebellion and bawdiness. Some smeared it on despite the stigma, while others literally poisoned themselves with toxic based formulas all in order to look beautiful.

Powerful women use it to assert their space and others used it to build courage and flirt with the idea of breaking down social norms. Red lipstick has inspired women like Dita Von Teese to assert, "Heels and red lipstick will put the fear of God into people", while it was the driving force for Coco Chanel, "If you're sad, add more lipstick and attack". 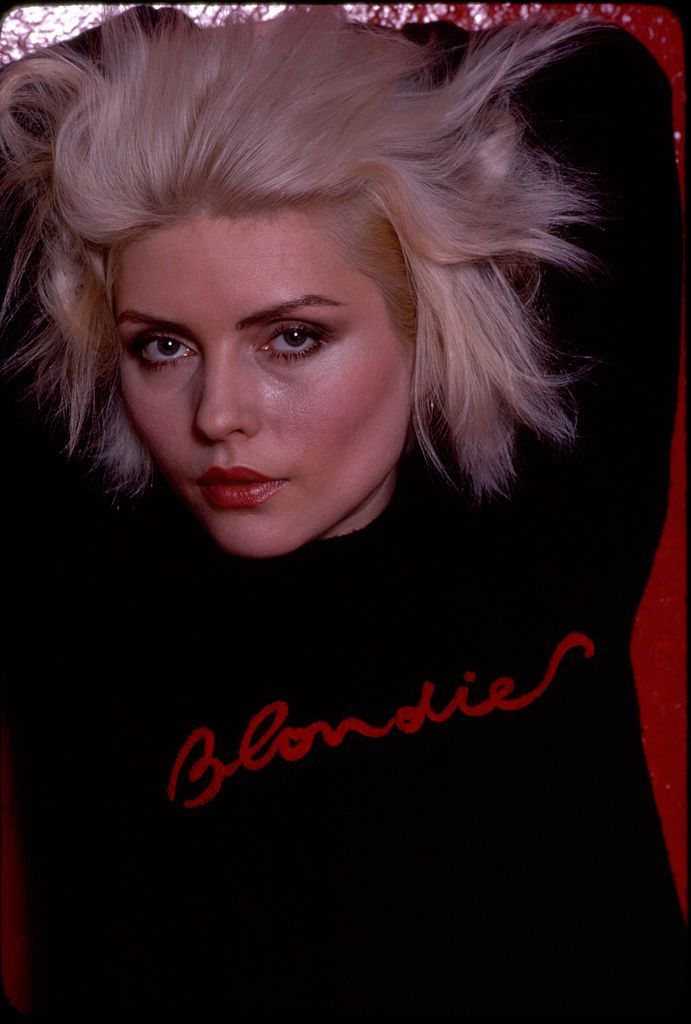 Throughout time, the cohort of crimson lip-wearers has included punk rock stars Debbie Harry and Siouxsie Sioux, as well as pop music idols including Madonna and Taylor Swift. The greats of vintage Hollywood too, with Elizabeth Taylor, Audrey Hepburn, Grace Kelly and of course, Marilyn Monroe also red-lip devotees.

But it wasn't something retained only for the glamourous either - Suffragettes, the World War II female workforce and 1920s flappers. From murder to prostitution and witchcraft accusations, the history of red lipstick has a sexy past that's 5,000 years deep.

Revel in it below. 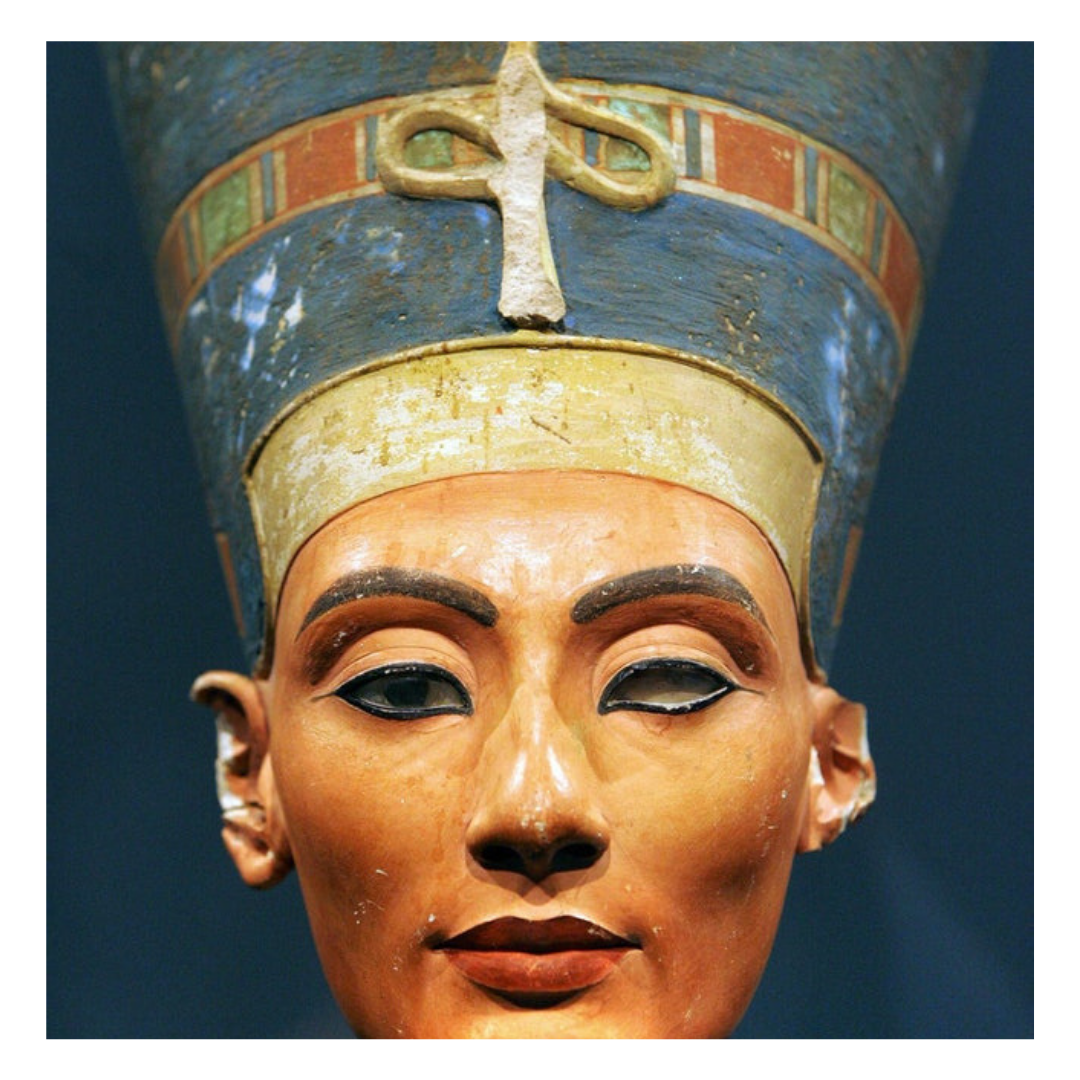 Ancient Sumerian men and women were the first to invent lipstick, making it out of crushed gemstones and white lead and painting their lips and eyes with the concoction.  Egyptians like Cleopatra also added red lip paint to their arsenal, crushing bugs to create a crimson for their lips.

While stains were seen as signs of aristocracy in Egypt, Greece saw it as the mark of a prostitute. This led to the first known makeup regulations, which required prostitutes to use lip colours and obvious makeup in public, or else they would be punished as it implied they were deceitfully posing as ladies. 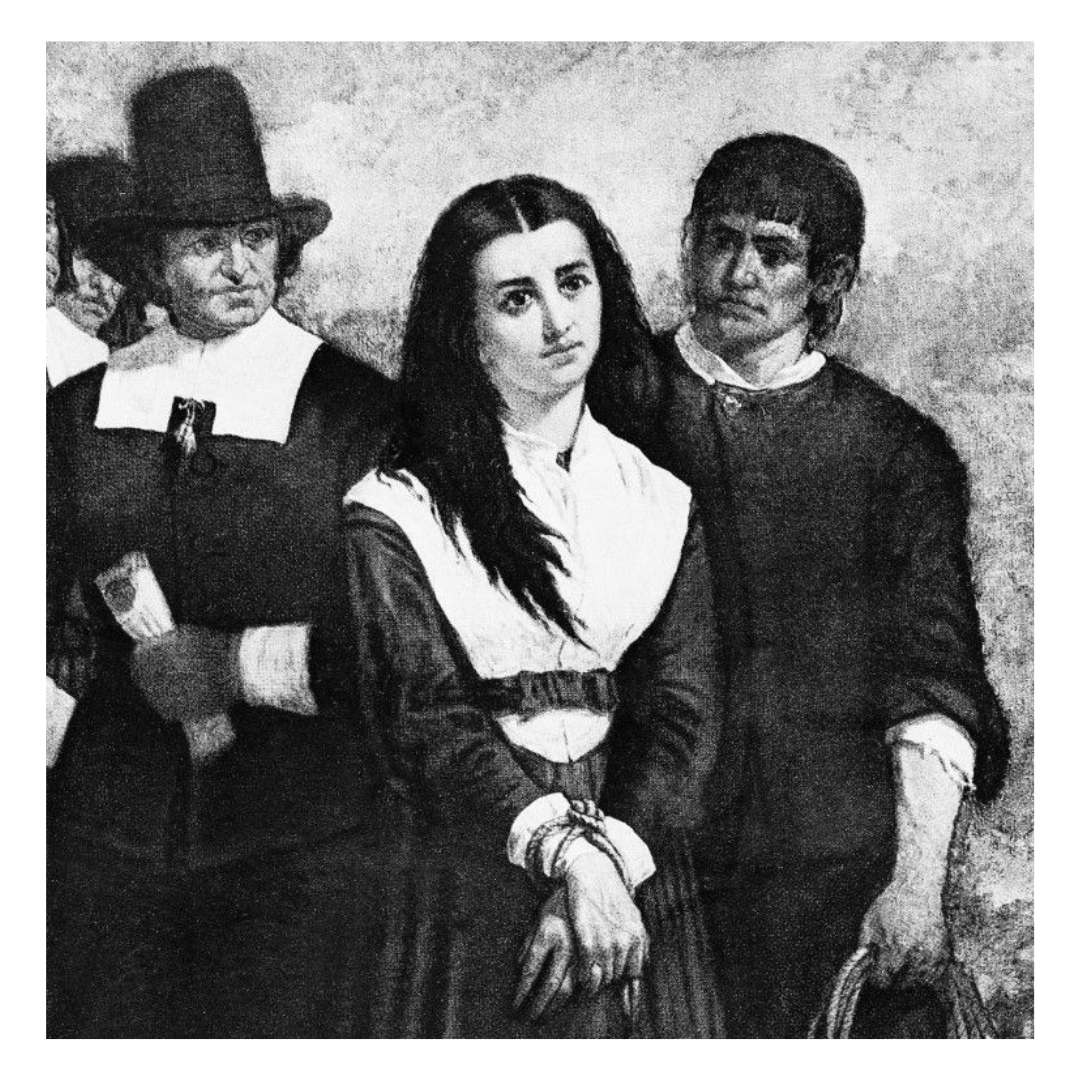 The advent of Christianity saw the church equate makeup with questionable morals and women frequently had to address their lipstick use at confession. Should a woman fail to confess the sin that was wearing red lipstick, they would then be suspected of being sorcerers and witches and put on trial. 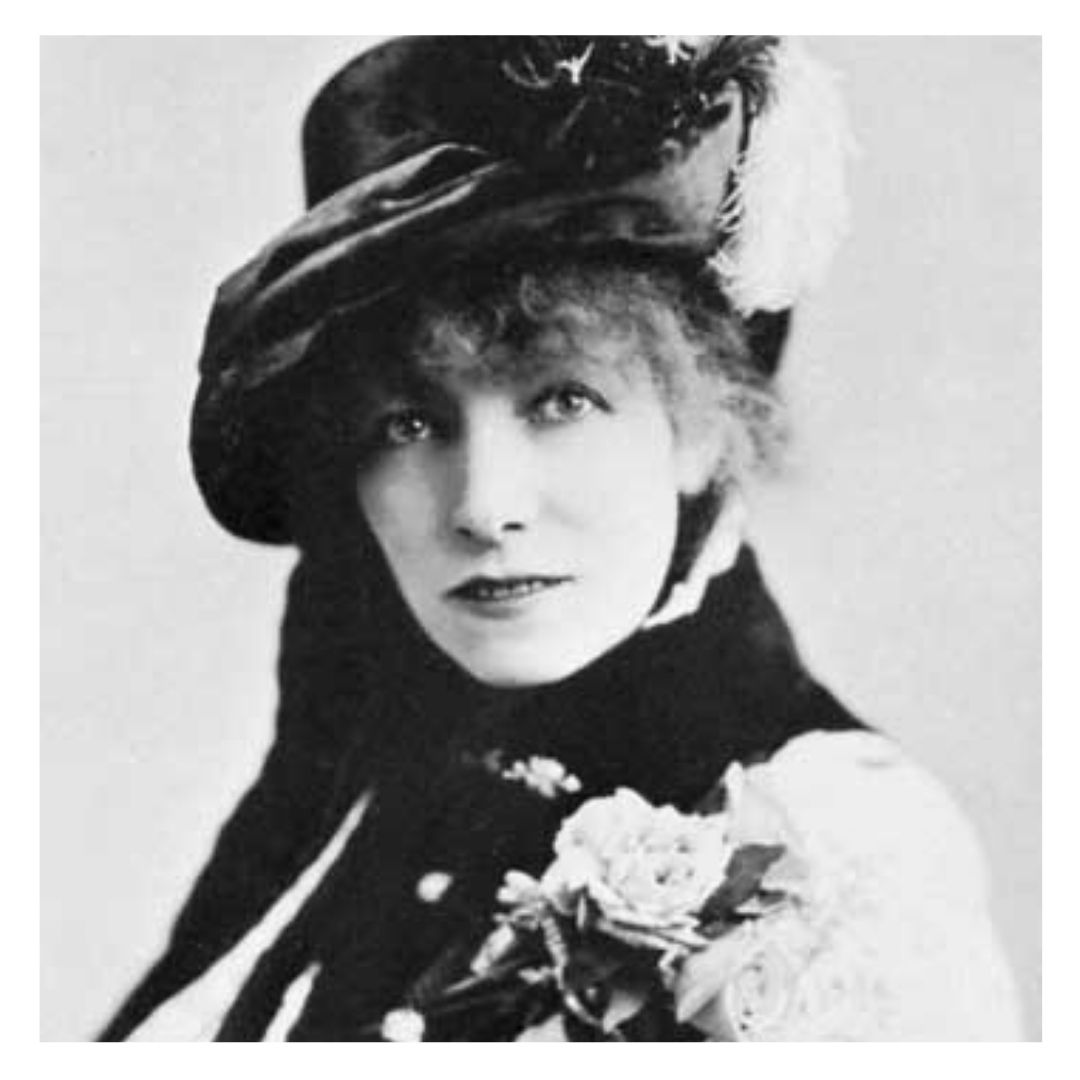 While the notion of pointy hats and striped stockings disappeared with the turn of the Victorian era, red lipstick was still problematic. Applying lipstick was considered an intimate act as applying it in public made men think of the boudoir.

That was until French actress Sarah Bernhardt caused a huge scandal by applying her lipstick in public. 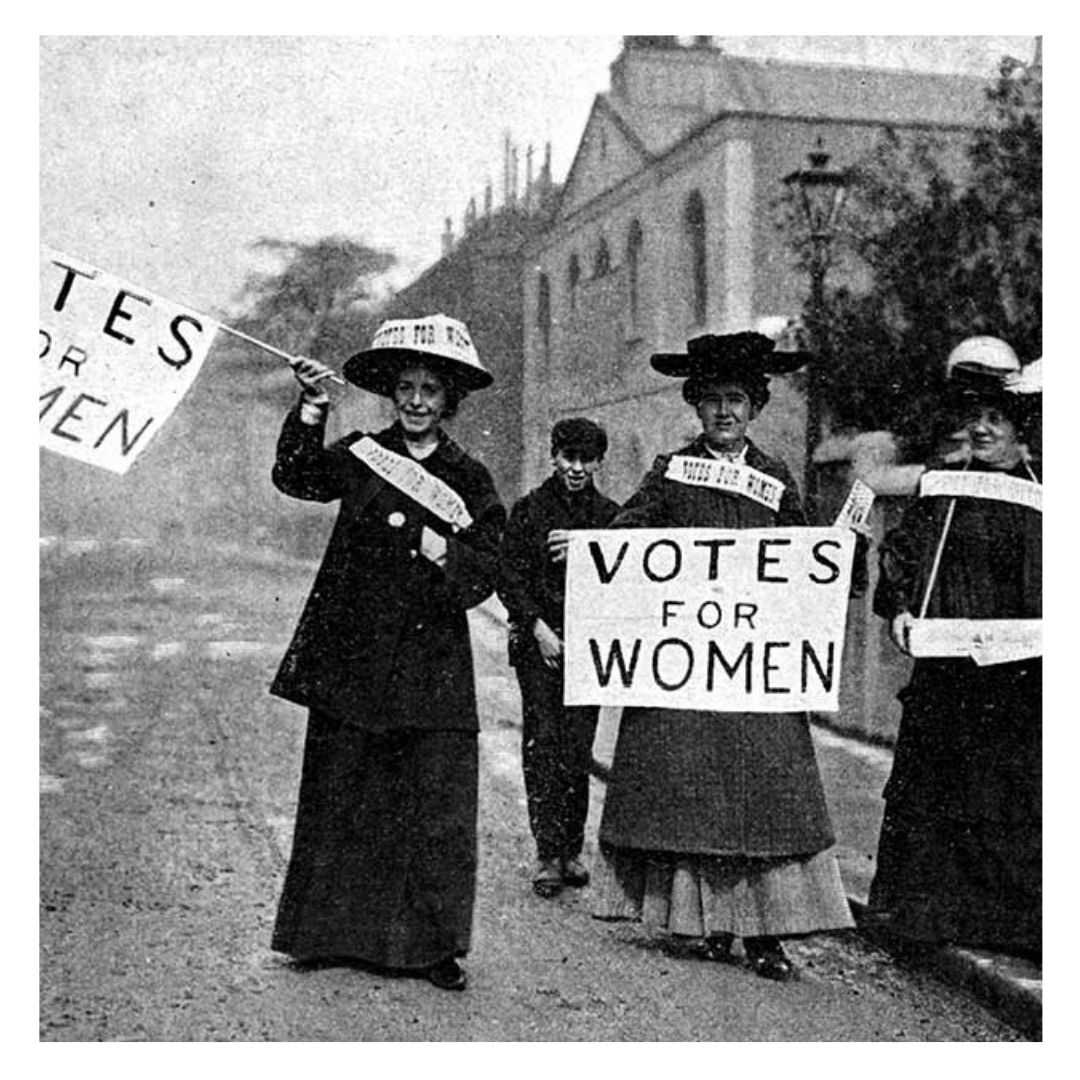 After centuries of the patriarchy limiting women to putting on their lip rogue in secret, red lipstick became a radical symbol of feminism and rebellion as the first and most famous public demonstration of red lipstick was performed by suffragettes as they poured into the New York streets in protest in 1912.

In 1915, the first lip colour in a sliding metal tube was pushed into the market by inventor Maurice Levy which freed women from the messy task of applying paper-wrapped red lipstick. Many see this invention as the reason for red lipstick's popularity. 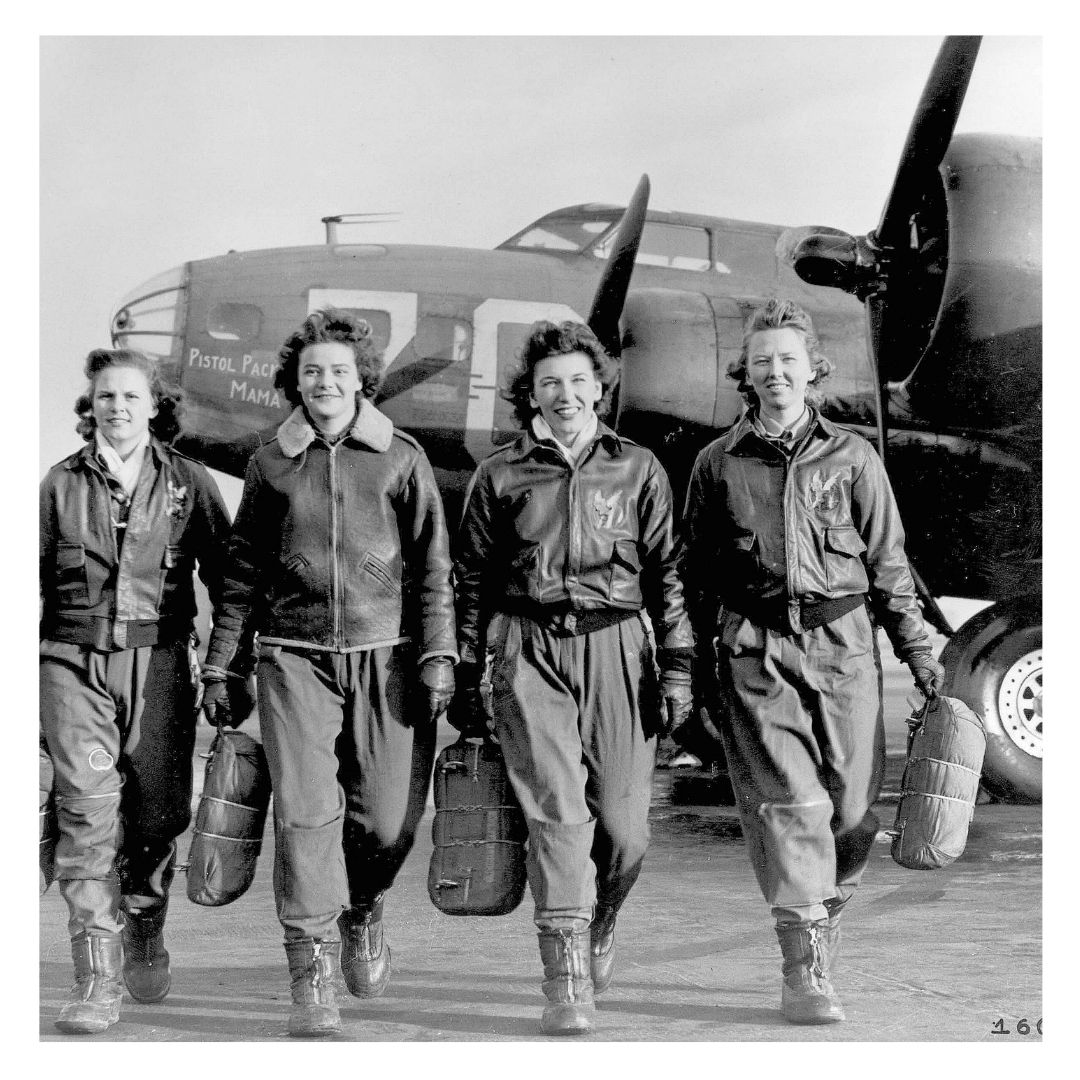 During World War II, lipstick became a symbol of resilient feminity in the face of danger which boosted the morale of both women and the soldiers overseas. So much so that the government ordered factory dressing rooms to be stocked with lipstick to keep up female workers' efficiency.

For women held in Nazi prison camps, a tube of red lipstick was the greatest luxury – the familiar pleasure of applying it raised their spirits and their resolve to survive. 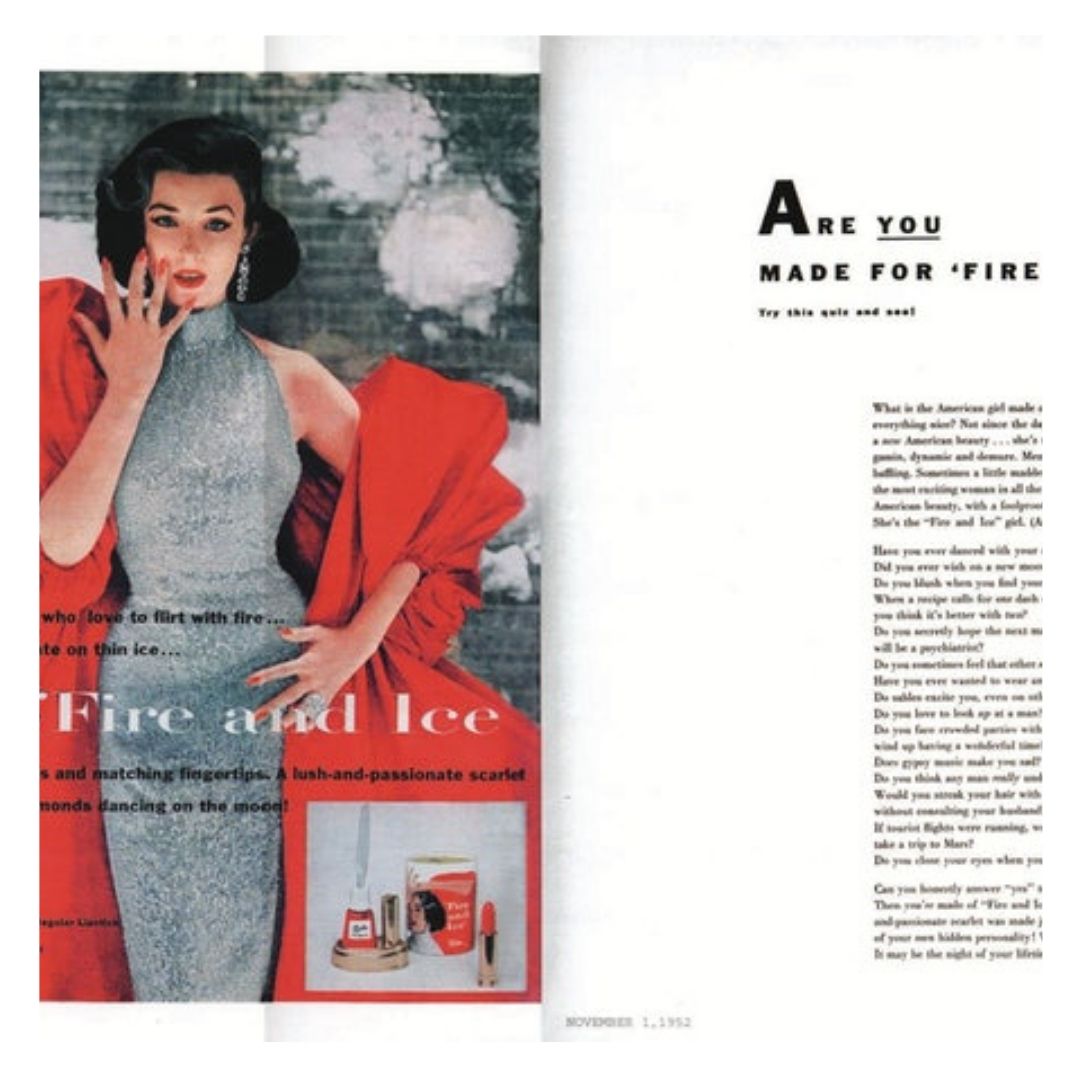 A magazine ad changed the way in which women looked the lipsticks in their bags. Revlon's iconic Fire & Ice campaign split women into two categories via a quiz with questions like, "would you streak your hair with platinum without consulting your husband" and, "have you ever danced with your shoes off?" that would help them determine if they were "naughty or nice."

This sparked an interest in women because it had questions that would qualify you as being either a good girl or a bad girl, more demure or daring. It sparked the imagination of women because it gave them a chance to explore both sides of their personalities since everybody could imagine themselves as being one or the other depending on the situation.

The quiz included in the magazines helped to promote this lipstick and made the sales soar. Already peaking in popularity, red lipstick then got the Hollywood effect with stars like Marilyn Monroe, Rita Hayworth and Ava Gardner each making the striking shade their signature. 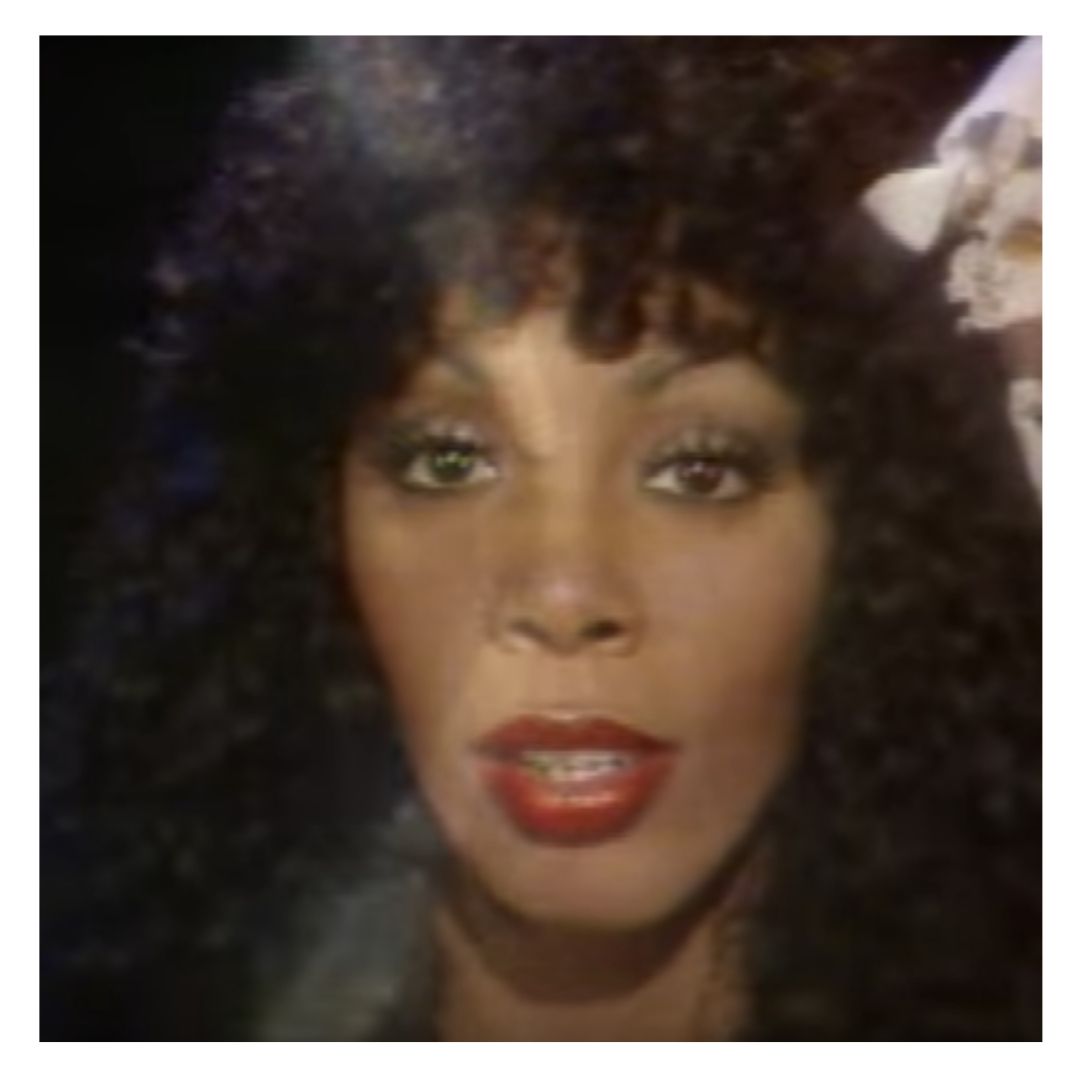 Following the popularity of nude shades during the Mod years, glossy reds made a comeback with disco-era glamour and punk rock subcultures encouraging the use of lipstick by men. With Studio 64 and plenty of boogie nights, came a need for slinky jumpsuits and glamorous makeup, bringing back cherry red lips. 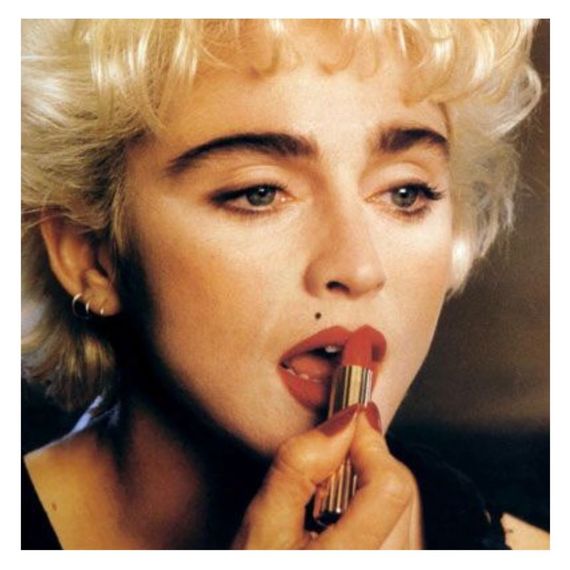 When the 80s fitness boom played out across gyms, red lipstick faded in popularity and pink hues took over. But women like Madonna and Julia Roberts kept rouge in vogue throughout the decade. After that, the colour has been on and off our radar and lips.

Nowadays, both men and women chose lipstick shades based on their mood rather than a trend. But with the rise of Alexandria Ocasio-Cortez using red lipstick to send a message to a prominent male environment who simply can't fathom her power.