From Jonathan Van Ness To Chrissy Teigen, Celebrities Are Bringing Back The Bob

Ready for the chop. 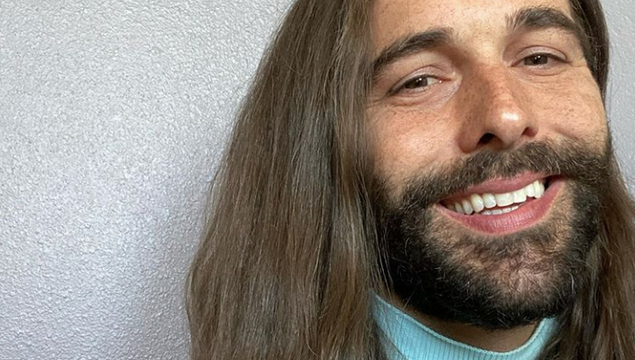 Whatever your dream chop looks like — now's the time to pull the trigger.

Forget bowl cuts or visions of page boy hair, the blunt bob is the latest hairstyle sweeping our Instagram feed. Saoirse Ronan, Chrissy Teigen and Caitriona Balfe have all thrown caution to the wind and lopped their hair from long to short this year. The result? Jaw-skimming styles that feel modern, refreshing, and a little bit sultry. As it goes, peekaboo necks are a sophisticated yet seductive way to show a little more skin.

And if the only thing stopping you is that little voice inside your head whispering, You'll miss your ponytail — we have the fix. Ahead, we've compiled a comprehensive roundup of the cutest short updos that will ward off any and all post-cut regret.

From the just above the shoulder to just below the ear scroll through to find the photo that will convince you to (finally) go above-the-shoulder short.

Jonathan Van Ness is the latest star to fall for the bob’s charms, it seems. Taking to Instagram, Queer Eye’s beauty guru shared a snap of his new ‘do, which has been cut to shoulder-length in a deep side-parting.

#newlook #covid19 #conversion #greyhair #haircolor Guys ... I had so much fun color my muses hair. She endured a total of 10 hours for this transformation ! No an easy task , but man #worthit #2020transformation #lovetothefans #makeup @sergiowastaken

Celebrity stylist Jill Crosby revealed Allison Janney’s new ‘do in an Instagram post, noting that the dramatic “transformation” took a whopping 10 hours. As per the pic, Janney’s hair has been chopped into a chic jaw-grazing bob. And, following that big post-lockdown trend, it’s been coloured a covetable white-blonde hair, too.

Chrissy Teigen has once again swapped her mermaid-length locks for a chic, clavicle-hugging bob. She first gave fans a sneak-peek at her new ‘do via her Instagram Stories, which saw the chop styled in a tousled, wavy style with a deep side-parting. “Short again,” she captioned it.

Cate Blanchett has never been afraid of experimenting with shorter hair. However, in recent months, the actor has let her locks grow into a blunt-chin-length style which she often wears with a natural wave.

I literally have nothing to do and no where to go today but I was dying to play with my new haircut...once it was all styled and pretty I figured I should complete the look with a touch of lipstick...and foundation...and blush...and brows...and eye shadow...now I’m all done up with no where to go. And I’ll have to spend an extra 15 mins washing this all off tonight...I didn’t really think this through. 

Famed for her long blonde hair, Suits star Katherine Heigl couldn’t resist showing off her new brunette bob on Instagram, which has been cut in a similar style to Phoebe Waller-Bridge’s iconic Fleabag ‘do.

When you wear a suit this good, you HAVE to close your eyes #ParisLife @dior @diorparfums

Although she's since turned things up a gear by opting for a 90s-inspired bowl cut, Charlize Theron's bob will stand the test of time. Not only am I head over heels for the cut of Charlize's style here, but I'm in desperate need for that rich, chocolate brown colour.

If there's one thing Bella Hadid and I have in common it's that we both very much express our emotions through our hair. And if Hahdid's Instagram is anything to go by...she's feeling a lot of emotions. But her brunette sleek bob is one that I believe should stay.

On @smoothradio right now. Elton, ABBA and Passenger with me. Come join!

It seems Myleene Klass was one of the first to head back to the salon after they reopened on 4 July, swapping up her long brunette hair into a sun-kissed blonde bob.

Lily James's blunt blonde bob is one of my favourite celebrity hair transformations of 2019 so far.

Anna Wintour and @donatella_versace’s #ForcesofFashion conversation was an ebb and flow of heartfelt moments and bouts of pure comedy, but throughout the entire panel, the most endearing anecdotes were those between Wintour and one of her oldest, closest friends. For decades, the two have shared in each other’s triumphs and tragedies—and had plenty of fun along the way. “I really admire Donatella for her honesty in a world that isn’t always completely honest,” Wintour said. “And, also, how unbelievably loyal she is to her friends, and how deeply she cares about her family. She is the most extraordinary mother,” she said, before adding: “So I don’t think of her as Donatella Versace, the blonde, extraordinary icon that she is, I think of her as Donatella, my friend.” Tap the link in our bio to read more highlights from their panel. Photographed by @coreytenold. Florals for the event provided by @venusetfleur

The queen of the bob, Anna Wintour's classic chin-length hairstyle is totally timeless. Pair it with a blunt, full fringe for extra power points.

That’s 2 years of physical, emotional, and spiritual growth that I cut off right there on my bday, thanks to some “help” from my sis @riawna ! Proud to be donating this hard work to @beyoutiful_foundation ❣️ and to everyone who came by today, sent food, flowers, videos, FaceTimes... thank you so much. It’s nice to feel grateful during times like these. This is #39

The Sopranos’ Jamie-Lynn Sigler decided to celebrate her birthday in style by chopping off her abundant brunette curls into a chic DIY bob.

For the past few months, the Irish actress has been sporting a shoulder-length lob, but come the first breeze of Autumn, she upgraded to a short, blunt, jawline-skimming bob. The cut oozes sophistication and trims her face like a custom picture frame, proving what we already knew to be true: Sometimes shedding a few inches of dead weight can be truly transformational.

Trust Emilia Clarke's wavy bob to be the only thing in this world strong enough to distract me from Jason Momoa's face.

Here’s my take on a traditional Israeli breakfast of chickpeas, salad, and tahini, adapted from my mom’s recipe. It may seem complicated but it’s pretty much just a lot of slicing, stirring, and blending  For chickpeas: Over medium heat, add avocado oil, 2 whole peeled garlic cloves, salt, one box of whole peeled tomatoes, and one cup of pre-cooked chickpeas. Add cumin and salt to taste. For salad: Finely chop cherry tomatoes, Persian cucumbers and parsley; dress with lemon juice, olive oil, and salt to taste. For bread: Slice half a baguette lengthwise, drizzle olive oil and sprinkle salt, throw in preheated oven to 400 F around 10 minutes or until golden brown. For hummus: In blender, add half a cup pre-cooked chickpeas, one garlic clove (peeled), juice of one lemon, 4 tbsp water, 1 tsp of salt.

Taking to Instagram earlier this year, Portman shared a cosy cooking tutorial, which revealed her take on a “traditional Israeli breakfast of chickpeas, salad and tahini (adapted from my mom’s recipe).” It was here that the actor first revealed her chic chin-length bob to the masses – and, unsurprisngly, they were fans.

Kaia Gerber has debuted her shortest cut yet. The model’s new style has more length at the back with shorter, choppy bits at the front - and actually falls into the category of an a-line pixie cut, when her hair isn’t tucked behind her ears.

Got brave ✂️ (rings are @daphine, knit is @andotherstories* gift)

This is how Brighton girls do bobs—blunt, centre-parted and with plenty of sass like Hannah.

Let's be honest, Lucy Boynton always looks amazing but I have a particular soft spot for this sharp, short bob.

Back in the studio, workin’ on my skills. 

Jennifer Lopez debuted a long shoulder-length bob back in November, while she was working the press circuit for Hustlers. Now, though, the indomitable JLo has switched up her look again, going for something a little shorter and more rock chic.

Grateful for the glam fam! What a weekend! #TIFF19 

Hair clips + side parting = the most elegant bob I ever did see. Thanks for the inspo, Kerry

Having a go at Hurling @skgaa in Galway 聾 take a look at our Story to see how The Duke and Duchess got on! The @officialGAA has over 2,200 clubs in all 32 counties of Ireland. Every summer, the inter-county All-Ireland Championships in hurling and football capture the attention of the Irish public and around 1.5 million people attend the GAA Championships from May to September. #RoyalVisitIreland

Kate Middleton is known for her head full of long, dark, curls. However, when she visited Ireland  back in March, royal fans were stunned to see she’d chopped her hair into a long, sleek, and elegant bob, which just sits on her shoulders.

Caitriona is serving up a triple-dose of hair inspiration here with her perfect length bob, that choppy fringe and her perfectly on-trend headscarf.

Sharing a photo from her holidays on Instagram, Serena Williams has revealed that she’s currently serving a blunt honey-blonde bob.

READ: I'm Just As Obsessed With Caitriona Balfe's Style As I Am With Her Work