The Best of the Past: Retro Oscars Inspo 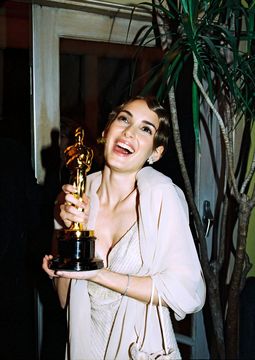 This year's Oscar looks not doing it for you? Take a lesson from our sisters and brothers of times-past and relive some of the best vintage red carpet moments.

It was an age before Time's Up or #MeToo existed; in some cases, an era in which the term 'red carpet stylist' would have drawn a blank expression. (Meryl Streep has no qualms about sharing the fact that, in an era pre-dating red carpet style, she wore her wedding dress to the Golden Globes in 1979 to what was then "a little afternoon event".) It's easy to look back nostalgically on these images of Oscars golden fashion moments through rose-tinted glasses and think of them as truly simpler times. The truth is, they were. Especially now that social media lends an insight into the level of prep that attendees partake in IRL. However, in spite of the red carpet circus that precedes today's Academy Awards ceremony, there is a silver lining. Today we can't get away with just throwing on 'any old thing' but we live in a more honest time, where the imbalances of Hollywood have never been so drawn under question. So while we wouldn't necessarily want to delve back into the old ways of the past in all manners, it sure is fun to ogle the fashion parade. Is it a wedding dress? Yes. Is it fabulous? Of course. Speaking of her sartorial choice for her second Academy Awards outing, Streep is straight up at addressing the reason why she decided to give her white gown another outing: “In those days, they didn’t lend you dresses, so you had to buy something,” she told Graham Norton. “I didn’t have any money, so I wore my wedding dress, as you would. It was a perfectly nice white silk dress.” In typical Streep style, she rocks it like the true style original that she is. Don't be fooled by Christie's ribbed ensemble at a post-Oscars press conference, pictured. The Darling actress's Oscars look consisted of a high-necked column dress in – wait for it – brilliant gold. (Full throttle Barbarella feels.) Forget designer name dropping, it was hand-sewn from a pattern by her friend. (Yes, those were the days.) While this is a more toned down number, its total 1960s vibes is what we love this actress for. 11
Claudia Schiffer, Pierce Brosnan and Naomi Campbell present the Oscar for Best Costume at the 68th Annual Academy Awards in 1996

Vintage Schiffer, Naomi Campbell in her hey-day and a Bond-era Brosnan – it's the nineties fashion mash-up of dreams...But what did they talk about in the green room? 11
1999: Celine Dion is nominated for Best Song with The Prayer from the movie Quest for Camelot

Before the days of the couture front row, this was Céline, unabridged: we love the white, the no fear approach and just how god-dam-nineties this look is. You work it, sister. While she wasn't taking home one of her five well-deserved Academy Awards on this occasion, we love Barbra Streisand's well-accessorised ensemble whilst planting a kiss on Best Actor winner John Wayne. If only we could rock a pink/sequin number with as much gusto. For many, this is an all-time favourite moment: the incandescent Michelle Williams glowing in mustard with then-husband Heath Ledger, two years before his tragic death. Of one thing we're sure: whoever said blondes shouldn't wear yellow is truly mistaken. Possibly one of the most iconic Oscars beauty looks of all time – it doesn't get much better than It girl of the moment, Winona Ryder rocking old school vintage Hollywood curls at the 1996 Academy Awards. A much-loved look on the night, it's now the stuff of beauty folklore. 11
Grace Kelly and William Holden at the 1955 Oscars, where Kelly scooped Best Actress for The Country Girl

A real life movie moment - the queen of the silver screen (and soon to be Princess of Monaco), Grace Kelly, picks up the Best Actress award in a gown that's a veritable mint dream. Paltrow is a long-standing fan of a sherbet, or clean white, hue on the red carpet, but this Ralph Lauren pastel number is forever etched in our memories as a golden moment. Finally, it's a long-standing hit on the red carpet and this #throwback moment just reinforces our love for Christian Dior Couture, as worn by Elizabeth Taylor when accepting her Oscar for Suddenly, Last Summer in 1960.