What To Wear To An Interview – According To 6 Irish Women

We asked six Irish women in various fields, from creative to corporate, about their fondest and most poignant professional look.
Freya Drohan 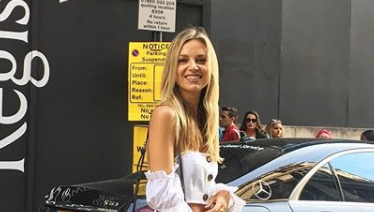 Job searching is anything but glamorous.

Perfecting CVs, preparing cover letters, pitching yourself to your career idols: it’s enough to make you want to both curl up and give up. Yet, the phone rings - they want to meet you! Now, the all-consuming search seems minuscule compared to finding an outfit that presents you in the best light possible.

Fashion may be deemed as frivolous and irrelevant by those in some industries, but a strong first impression is reliant on an interview look that is as polished as your most up-to-date CV.

Whether it’s a phone call asking you to be camera-ready with a day’s notice, a pivotal client meeting, or attempting to land that first position post-college, finding the right garments for these major milestones in life is the step on the ladder that we often lose our footing on.

We asked six Irish women in various fields, from creative to corporate, about their fondest and most poignant professional look.

Annie Gribbin, pro makeup artist and owner of Make Up For Ever Ireland, recalls a defining purchase during an early career highlight when she was tasked with beautifying actress Alicia Silverstone.

“I remember very clearly one of the first big, well-paid jobs that I was booked for. We were staying at The Dorchester Hotel on a press junket and I was doing her [Silverstone’s] makeup for several days, travelling around all the major European cities. It was a dream job! I decided to treat myself and I loved Prada, so in my free time, I took myself into the Prada boutique and bought the most fantastic little black dress - which I still have in my wardrobe today, almost twenty years later. I also purchased a fantastic pair of black stiletto shoes and a little leather bag. I felt like a million dollars. They were all investment pieces and would still work well today but my shoes were stolen on a holiday in the south of France when I was pregnant with my daughter Niamh. All my luggage, which contained all my most precious clothes at the time, was stolen. I was so happy that my little black Prada dress and bag weren’t packed for that trip as they are now vintage pieces.”

While Gribbin’s iconic LBD has lasted decades, journalist Alice Murphy also returned to a reliable wardrobe staple from a few years’ previous to land her job at the Daily Mail Australia.

And they say women don’t have balls

“My mam took me shopping when I landed my first job after college and bought me a silk, printed dress with sheer sleeves from Sandro. It’s still my favourite piece of clothing, and I wore it to the Daily Mail interview a week after arriving in Australia. In a new city, with Google Maps as my only companion, I paired the dress with light denier black tights and black pointed shoes with a low gold heel to avoid my feet seizing up. If you can’t manage heels, don’t wear them - it’s unprofessional and flats can look equally chic if you style them right. With its jewel-hued, oriental pattern, the dress spoke for itself so I kept my makeup light and my accessories to a minimum, just a necklace and two rings I wear for luck (Irish superstition). The hiring manager complimented my dress and two days later, I got the job.”

She adds, “When I was younger, I trained as a classical pianist at the Royal Irish Academy. At every exam part of our marks were awarded for presentation, and I always tried to wear something that made me stood out, something memorable. Fashion might be trivial to some people, but I honestly believe you can have anything you want if you dress for it."

Senior Account Manager at one of New York’s top beauty public relations agencies, Stephanie O’Quigley, remembers that the calming presence of her mother was also an integral part of helping her gain her first step into the working world.

“I somehow landed an interview for my absolute dream internship the same week I finished my final year college exams. The nerves were flowing as my mam and I parked outside. I wore black jeans, brogues, and an oversized blue silk scarf-print shirt. After the interview, the lady continued to talk to me as I was leaving. I made my way outside the building towards the car and she finished off by saying, ‘Thanks again - I love your shirt by the way!’ I waved back to her and got into the car. I got the job. That was five years ago and I still have the silk shirt.”

It seems that no matter your age, the job at hand, or where in the world your career has taken you, the opinion of your mother is always one that sways the decision. TV presenter Ruth O’Neill had barely felt her feet touch the ground in Ireland after a stint abroad when she got the call for a huge opportunity.

“It was October 2015 and I had just come back to Ireland after living in Los Angeles for five years and working for E! News. The producer from [TV3’s] Xposé called me up out of the blue and asked would I guest present the show for two nights. I played it cool on the phone but then immediately thought, ‘Oh God, what will I wear?!’. I knew it was a trial/screen test for a potential presenter role they had coming up. I meticulously planned the outfits - even giving a small fashion show to my parents! I chose to wear block colours as they work better on-screen and aren't distracting. I wore a baby blue cami top and baby blue faux leather skirt from H&M for the first night and for the second night I wore a slick white C/Meo Collective dress that I had bought in Bloomingdales in LA earlier that year. I felt fabulous in the outfits and they gave me so much confidence. When you need to perform and be present I think planning your outfit is essential then you can concentrate on nailing your interview or screen test.  For big things like that I always plan the finer details too: what shoes, what jewellery, and what way I'll do for my hair and makeup to complement the look. First impressions are crucial and once you get in the door and get the job you can relax into things. I landed my dream job with Xposé a few months later!”

Also advocating the importance of neutral tones and block colours is Miami-based Global Hospitality Consultant and founder of The CEOhh Selina Regazzoli.

“My most memorable outfit coincidentally landed me my largest international client in Miami. I’ve always believed in marrying professional attire with a touch of fabulous flair, and heavily endorse wearing a statement item that reflects your personality and makes you memorable for the right reasons. I carefully chose neutral tones (the Floridian sun allows for brighter business wear!) I wore a neatly-fitted pair of cream trousers which rested above the ankle, a cream chiffon shirt with ruffles down the front, topped with a beige custom fit blazer with gold buttons. I like to match items and colours throughout my outfit. In some strategic way, this makes me feel more balanced and in control, thus I wore a light brown heel with a matching brown vintage leather briefcase to finish it off. The look mirrored my 'corporate with a touch of glam' personality, while embracing my fiery management style, and in turn was the inspiration behind my logo for my The CEOhh."

Just like boring black suits would look out of place in the Sunshine State, in New York City, an outfit that showcases individual flair is non-negotiable.

Olivia O’Callaghan garnered a position working for renowned musician Steve Van Zandt (a member of Bruce Springsteen’s E Street Band). Interviewing for her current role, which sees her working across his record label, radio station, and recording studio, she knew she needed to stand out from the competition.

“Coming from Ireland as a naive, young 24-year-old, I had envisioned working anywhere in NYC would be glamorous, cool, quirky, and eccentric. When I interviewed for my job in a rock n' roll record label/music production company, I decided to go down the ‘edgy yet cool’ route and break in my new Topshop/Nordstrom clear-knee mom jeans, paired with a cute t-shirt and leather jacket. After a lengthy subway commute, and two extremely sticky knees later, I get to the interview and everyone is wearing... Converse, jeans and band t-shirts! To say I was overdressed is an understatement. I ultimately got the job, and I too have now become accustomed to the Converse and t-shirt lifestyle.”

Fake it 'til you make it - but don't compromise on your sense of style on the way to the top.

READ: The 5 Jeans Trends Our Editors Are Willing To Fight Over

READ MORE: The Five Trans-Seasonal Pieces You Should Always Have In Your Wardrobe