Attention Upper East Siders: Everyone on Instagram Is Dressing Like They Just Stepped Off the Set of Gossip Girl 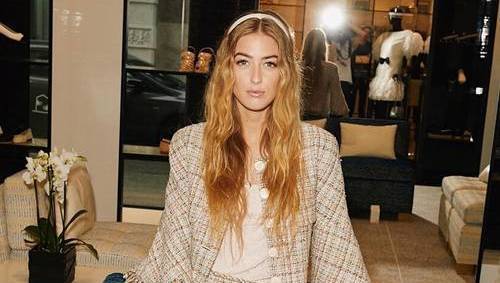 Maybe it's because the entire six seasons are on Netflix ready to be binged at any given moment or maybe it's because reunion rumours are afloat but either way, Gossip Girl inspired fashion is still going strong.

With pangs of nostalgia, elaborate lifestyles and enviable wardrobes, the recent Gossip Girl fashion trend comes as no surprise. Over the past few months, a fair number of trends have emerged - all of which reak of Blair Wardolf and co.

Naturally, there's a fine line between Halloween costume and fashion revival so while we applaud the likes of Maria Bernad and Emili Sindlev for their pearl encrusted plaid with matching berets, it's not exactly a day-to-day ensemble for us mere mortals.

Instead, the best way to fully embrace the Gossip Girl school-days look is by swapping out old-time favourites for Gossip Girl trends. Instead of a fascinator, try a headband the next time you attend a wedding. Instead of the same reliable power suit you wear to an important meeting, try a well-tailored skirt two piece. Or, instead of 10 denier tights on chilly Spring days, try a lace stocking.

And when in doubt, ask: What would Blair Waldorf do? That goes for all of life's questions btw.

Schoolgirl crushes aside if Gossip Girl gave us anything - it's hair accessories. The preppy headband look that never left the head of Blair has now come back into fashion and Instagram is on board. From plain black styles to statement embellished numbers, there's a look for everyone.

...and speaking of hair accessories. This time, Instagram is taking inspiration from the bohemian aesthetic that was Serena Van Woodsen. Headscarves are nothing new in the accessory world but rather than tying in a rockabilly-esque style, fashion 'it' girls are tying them around the ponytails. Serena would approve.

Alongside co-ords and coloured trouser suits, the skirt suit is a trend that speaks to a synchronizing soul. Coming in a range of fabrics and silhouettes, there's a touch of school uniform vibe about these looks, in the best possible way.

The LBD is no longer a simple evening or cocktail dress and instead, a minidress typically worn with a white shirt that resembles the school pinafore style worn by little J. Worn on its own with knee high socks or a black leather jacket and platform trainers, you can decide whether you're more inspired by Jenny before or after she becomes 'goth'.

Some may kick and scream and the resurgence of socks and loafers, but when worn correctly, it can look pretty chic. Whether flat or heeled, loafers are a great footwear staple and can be worn easily with everything from jeans to skirts to smock dress. Perhaps even with a loud printed sweater vest for an added Chuck Bass season 1 flair.

The Blair...for the third time

Stop waiting for Friday, for summer, for someone to fall in love with you, for life. Happiness is achieved when you stop waiting for it and make the most it the moment you are in now ❤️ . . . #ootd #paris #eiffeltower #parisianstyle #sylwiamajdan #miniskirt #tweed #whiteshirt #chanel #chanelbag #chanelwalletonchain #classicchanel #tomford #sunglasses #calzedonia #lacetights

Alongside headbands and skirt suits, tights were a Blair Waldorf staple. Seven years later, they're becoming a staple on Instagram. Today though, she would be swapping out ribbed tights for designer logo styles.

READ: Why Frank Ocean's Met Gala Look Was Anything But "Boring"