"Old vacation tropes are a roll call of spring’s biggest trends. Sorry to inform you, but you likely reached peak fashion in Tramore close to three decades ago."
Sarah Macken 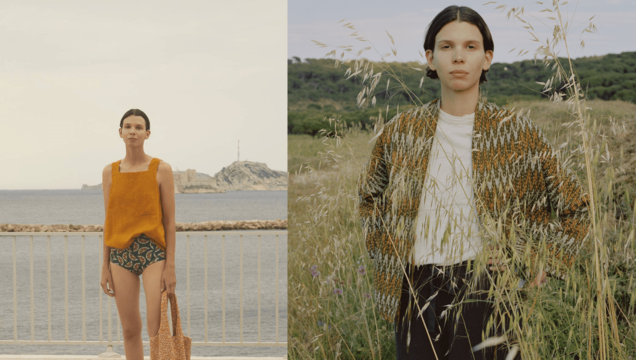 Thermals, waterproofs and flagons of tea (in June!): dressing for the humble Irish holiday can pose a challenge. Sarah Macken gleans some wisdom from Ireland’s fashion insiders on how to make a staycation a stylish affair.

The phrase “Irish holiday” is a visceral one. For many, it holds a nostalgia of formative years passed noshing on ham sandwiches on a wind-battered beach and rainy days squelching through caravan parks in damp socks. Sandals were, naturally, par for the course.

There was good fashion, too: bucket hats, ruffled swimsuits (preferably with polka dots), Saltwater-style sandals, jaunty yellow raincoats and plenty of sailor collars, not least for the boys.

If any of this sounds relevant to your life right now, it’s because it is. Indeed, these old vacation tropes are a roll call of spring’s biggest trends. Sorry to inform you, but you likely reached peak fashion in Tramore close to three decades ago.

Darren Kennedy, a stylist, admits he hit upon his perfect style formula on camping holidays to Co Clare, aged six. “I was in my element climbing trees and catching frogs in striped T-shirts, wellies and denim cut-offs,” he says, “I still channel that on holidays today.”

Wendy Crawford, founder of Scout boutique admits she longs for the outfits she wore when trilling around the Ring of Kerry as a youngster. “I had a little bob and a fringe, 1970s velour
shorts, gorgeous canvas shoes, and lots of Peter Pan necklines,” she says. “I pretty much recreated that look, in some form, into my thirties.”

Staycation. Mini-break. Going “off-grid”: whatever the moniker, this year’s summer plans are looking unexpectedly wholesome. We’re trading sun loungers for sea swimming, jet-setting for country hikes, 7 am airport Prosecco for pints and a packet of crisps somewhere in the back of beyond. The upside to enforced staycations is that we can recapture that honeyed,
homely nostalgia we deemed lost forever.

So, what to wear?

For Isabella Davey, head of communications and digital at Copenhagen Fashion Week the Aran knit reigns supreme. Davey pairs her Aran knits with Levi’s, “a pair of beaten up cowboy boots” and “a cap my sister found for me in South America”. She’s not alone. One look at artist Anne Madden and husband Louis le Brocquy on the Beara peninsula in 1974, wearing matching cable-stitch Aran pullovers confirms the perennial cool of the Irish classic.

For Davey, it’s indicative of a longing for time out. “My staycation style is a very relaxed affair,” she says. “In my working week I can have up to eight meetings a day. On holiday, I really like to take it down a few levels as I want a moment to recharge.” That means a culling of “anything too tight, too high or too precious”. As an Irish ex-pat living in Copenhagen, she has learned to embrace Scandinavia’s chilled-out approach to holiday dressing. The rules are simple: comfort is queen and simplicity is key. “A big staycation look is going down to the water from the summer house [a traditional Danish holiday home] in your robe and some slip-on clogs,” she says. “Straight in, straight out, straight into the kitchen for a hot coffee afterward.”

A cursory glance at the last century hints at a legacy of off-duty staycation glamour. In 1912, when Gabrielle Chanel migrated from Paris to Deauville, one of the most popular seaside resorts of the Belle Époque, she hit upon the need for a holiday capsule. She felt inspired — by the striped shirts of the sailors, her lover Boy Capel’s polo jacket, the Impressionist skies of Normandy — to create a louche yet luxurious wardrobe for women to holiday in; creating movable and breathable pieces in jersey, a fabric largely shunned by the fashion industry at the time.

Before there were influencers, there was the influence of one particular woman: Jackie Kennedy. When the former First Lady spent four weeks in Woodstown, Co Wexford in 1967, she set a new standard for country pile glamour. “Jackie was a keen headscarf wearer as were most Irish women at the time,” says Ruth Griffin, a fashion historian. “On this trip, she showed us how to modernise the look by teaming crisp headscarves with shift dresses and denim, as seen when she was horse riding at Woodstown.” Right now, that glamour is somewhat tempered, says Shelly Corkery fashion buying director of Brown Thomas. “It’s not feathers and sequins, but it’s a bit of a return to normality,” she says. “We can trade joggers for a nice dress, trainers for a chic sandal. It’s all about how you put it together.”

When Darren Kennedy isn’t emulating the style of Paul Newman or Samuel Beckett via roll necks and a good jumper, he enjoys shrugging on an easygoing Cuban shirt for cocktail hour. His top styling tip? He always chooses flat-front trousers over chinos: “They’re less formal.”

Whether you forgo high-octane glamour or simply sling a pair of Wellingtons onto the back seat, lean on Davey’s advice, citing the most essential piece of any staycation as – unsurprisingly – a puffa coat. “Alongside my Ganni track-soled boots and a purple Tekla bathrobe, a puffa coat by Holzweiler is my essential." Davey’s observation is the roll-with-the-punches staycation mood we all need. So if the heaven’s open, there’s not a whiff of good weather to wear your newly-minted sundress in and the general vibe is more Fawlty Towers than Instagrammable getaway, there are always puffa coats — and, quite importantly, sundowners.

This article was published in the June issue of Irish Tatler, which accompanies the Business Post every second Sunday of the month.