Kate Spade and the Lonely Pressure of the Fashion World 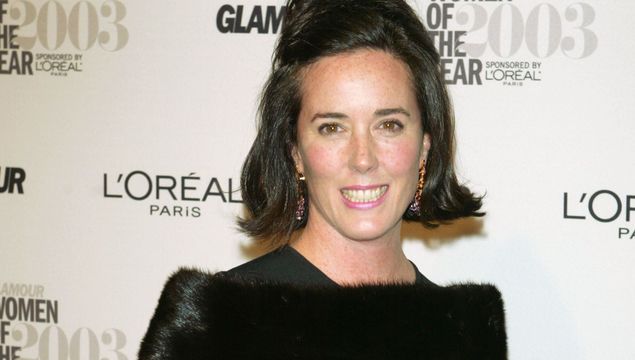 Kate Spade was deemed a ‘giant of design’, but was the pressure just too much?

Iconic American designer Kate Spade was found dead at her home yesterday at the age of 55, and the fashion world was quick to pay tribute. Diane von Furstenberg, chairman of the Council of Fashion Designers of America, said she was, "a great talent who had an immeasurable impact on American fashion," Kenneth Cole called her ‘inspiring,’ and Kelly Cutrone, fashion publicist of MTV’s The Hills fame, burst into tears when told the news. Cynthia Rowley shared a photo of the two fashion friends pregnant and posing bump to bump: "Here we are in happier times, I'll miss my dear friend Kate."

Leaving a note at the scene, Spade appears to have died by suicide, the third fashioner designer to take their own life this decade alone: In February 2010, British designer Alexander McQueen died by hanging, as did L’Wren Scott, designer and girlfriend of Rolling Stones’ Mick Jagger, four years later, in March 2014.

McQueen killed himself nine days after the death of his mother, having expressed his devastation at her death on his Twitter feed days before. Scott left no note and her motives remain unclear. While her fashion business was struggling financially friends believe the debt was unlikely to prompt such a tragic response.

On the surface, Spade appeared to have no such financial woes. In 1999, luxury department store Neiman Marcus bought a majority stake in the company she had set up with her husband six years earlier. The couple stepped away from the company in 2006 when it was sold to Liz Claiborne for a sum in the region of $125 million. Lacking a creative outlet is an unlikely reason either – in 2015, she launched Frances Valentine, a line of bags and shoes named for her daughter.

READ MORE: Why Sustainable Fashion Wins For This Up and Coming Irish Designer

So why does a woman, who seems to ‘have it all,’ choose to take her own life? Was it a perfect storm of the pressure to remain relevant in an industry that values only the new?

As so many people have pointed out since hearing of her passing, depression doesn’t discriminate. The inquest into Alexander McQueen’s death revealed that he suffered from the disorder, as well as anxiety and insomnia, and L’Wren Scott has been called troubled, reportedly self-harming just weeks before her death. In 2011, creative director Christophe Decarnin left Balmain before the AW11 show. According to a spokesperson, ‘It’s been a demanding season… now he needs to rest,’ and the designer was asked to stay at home by doctor’s orders. Rumours swirled that he was being treated for depression.

The pace of the fashion world is simply staggering: The over-flowing calendar of shows and fashion weeks, the ever-expanding cycle of collections. Following his return to the fold, John Galliano revealed that he had been overseeing 32 collections a year across Dior and his own label.

With so much money at stake – in 2015, New York Fashion week was said to have been worth $900 million – the pressure to perform must be immense. Social media, plays its part, instantly sharing collections across the globe for immediate critique.

And it isn’t just designers feeling the pressure: 40 per cent of fashion models suffer from an eating disorder and depression. In 2014, model Adwoa Aboah, who has been the face of Calvin Klein, Fendi, DKNY and Alexander Wang and Versace, attempted suicide. Cara Delevingne has also suffered with depression, telling Esquire magazine that she liked the person everybody thought she was, but hated her real self.

The link between genius and madness is oft cited but the pressure placed on individuals by the fashion industry would surely cripple the most resilient of individuals. Perhaps it’s time to turn away from fast fashion and choose pieces that Kate Spade’s brand espoused: classic, timeless styles that you keep forever, because, as she said herself, ‘you like it, not because you’re supposed to have it.’

READ MORE: In pursuit of Happiness - how to reach the elusive happy place