Join us in a game of: 'Let's play stylist' 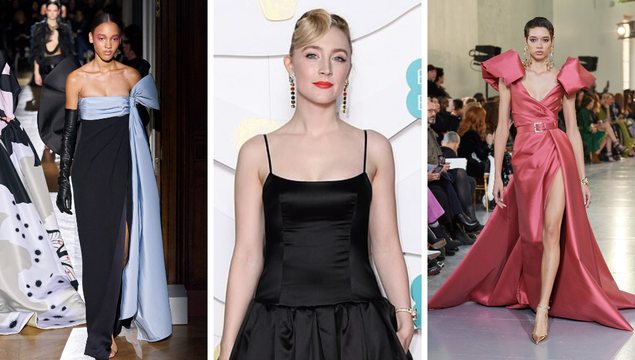 With the 2020 Academy Awards fast approaching (it’s this Sunday, in case you’ve been living under a rock), it’s time to start seriously thinking about the red carpet...

The Oscars roll into LA on Sunday, February 9, putting an end to months of speculation as to who will scoop the coveted statues. Tough call when the nominees for Leading Actress alone comprise Saoirse Ronan, Cynthia Erivo, Charlize Theron, Renée Zellweger and Scarlett Johansson. And while we could predict who will walk away with the award (*cough* Renée *cough*), we thought we'd take a moment to daydream about the gowns that just might rule the red carpet at this year's ceremony.

In order to properly predict what we’ll see parading down the red carpet, we did some serious investigating into this year’s nominees for Actress in a Leading Role and Actress in a Supporting Role and some presenters—and picked a designer they’ve shown a particular predilection towards. From there, we took a peek at said designer’s most recent haute couture runway collection (some were shown this past week!) and found the look we think each star is likely to choose for the big night.

TRENDING TODAY: The Eye Cream That Turned Me Into A Believer

Although it is likely that many of these women (and men) will wear custom dresses that have never been seen before, we have rounded up 11 gowns that we would love to see on that red carpet come Sunday. 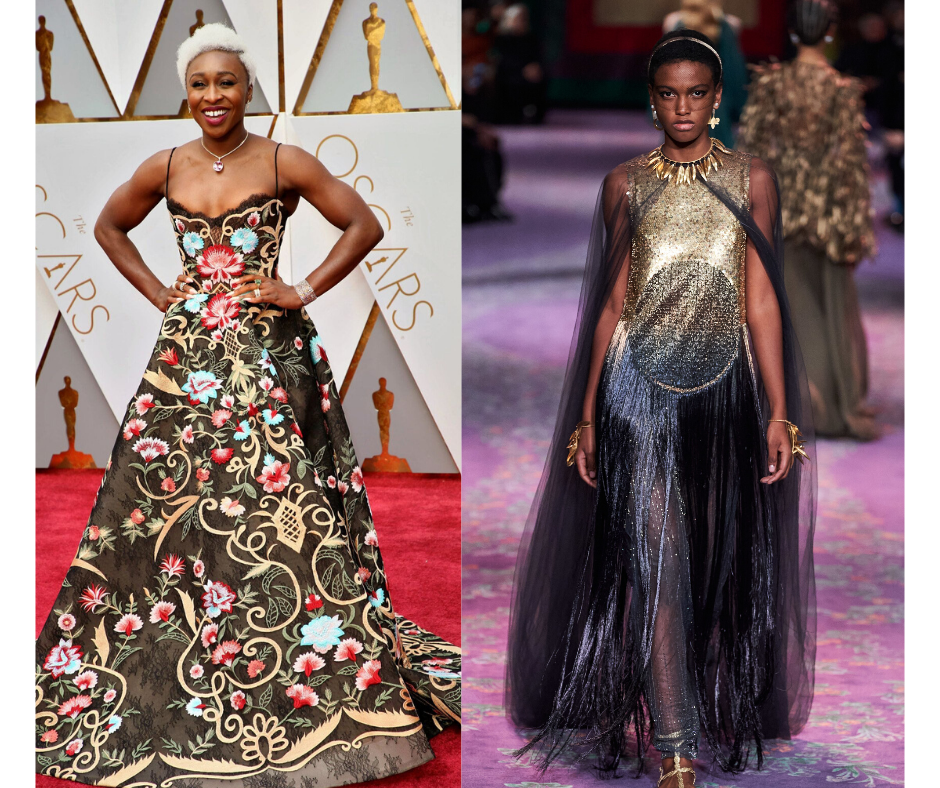 Cynthia Erivo isn't one to shy away from making a statement with her style, which is why we could see her fully embracing this haute couture look by Dior, with its sequinned ombre, fringe and a cape. 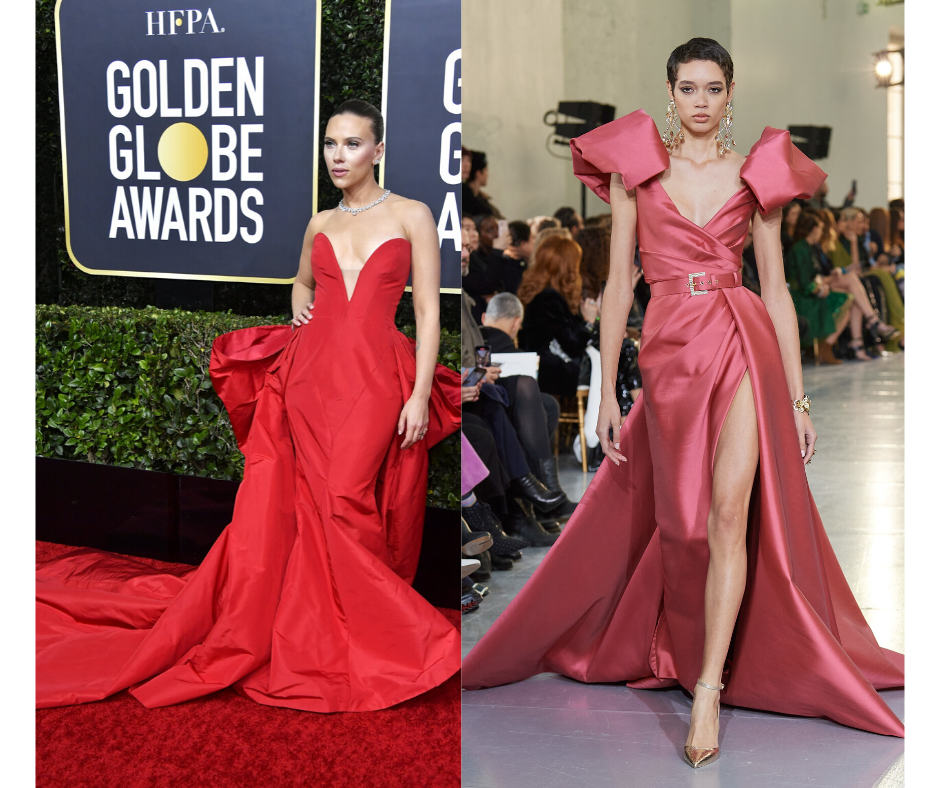 Scarlett Johansson’s red carpet style is sleek, sexy and dramatic—she tends to go for daring necklines, saturated colours and volume –whether it be around her waist or neck. This rose-coloured satin gown from Elie Saab ticks all the boxes, with a plunging V shape in the front and puffed shoulders and a thigh-high slit. 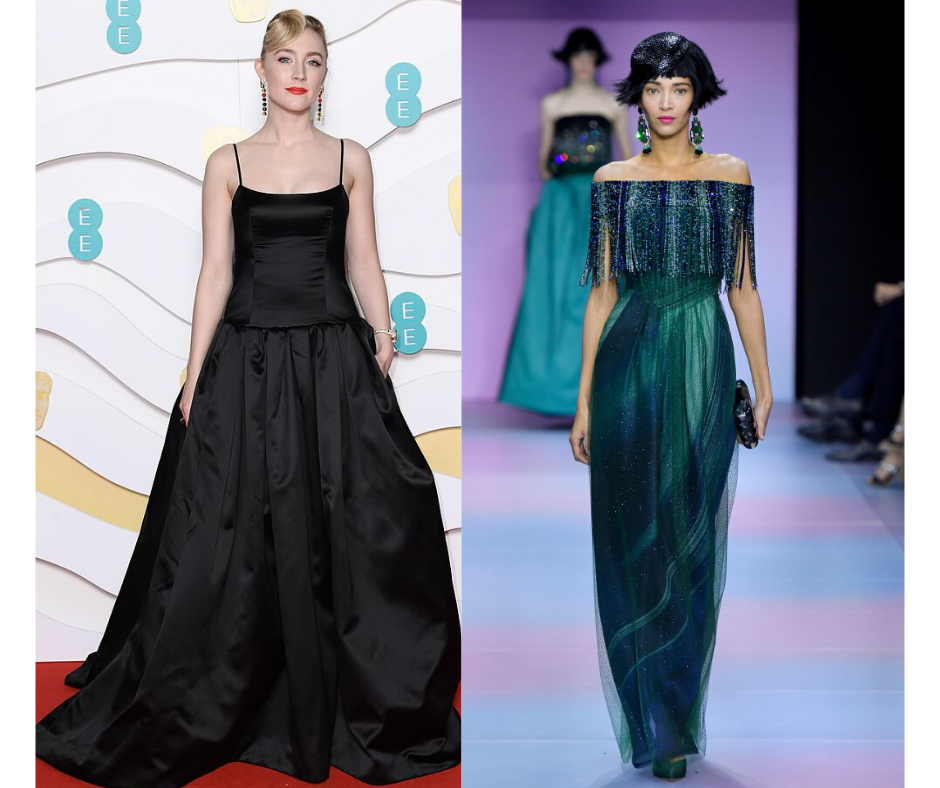 Ever since her first awards season, Saoirse Ronan has kept things chic and simple on the red carpet. She goes for sleek, not-too-structured dresses that are youthful without being girlish, and somehow manages to make a formal off the shoulder gown feel cool—never dowdy. We also know that Saoirse likes to make nods to Ireland when choosing her gown (think Oscars 2016). This beaded, off-the-shoulder emerald Armani Privé gown reminded us of home so we imagine it'll have the same effect on Saoirse. We love the painterly pattern on the skirt and subtle all-over shimmer. In fact, the entire look would work for the Academy Awards: Keep the clutch, the matching shoes, and the shoulder-skimming earrings and she’d be good to go. 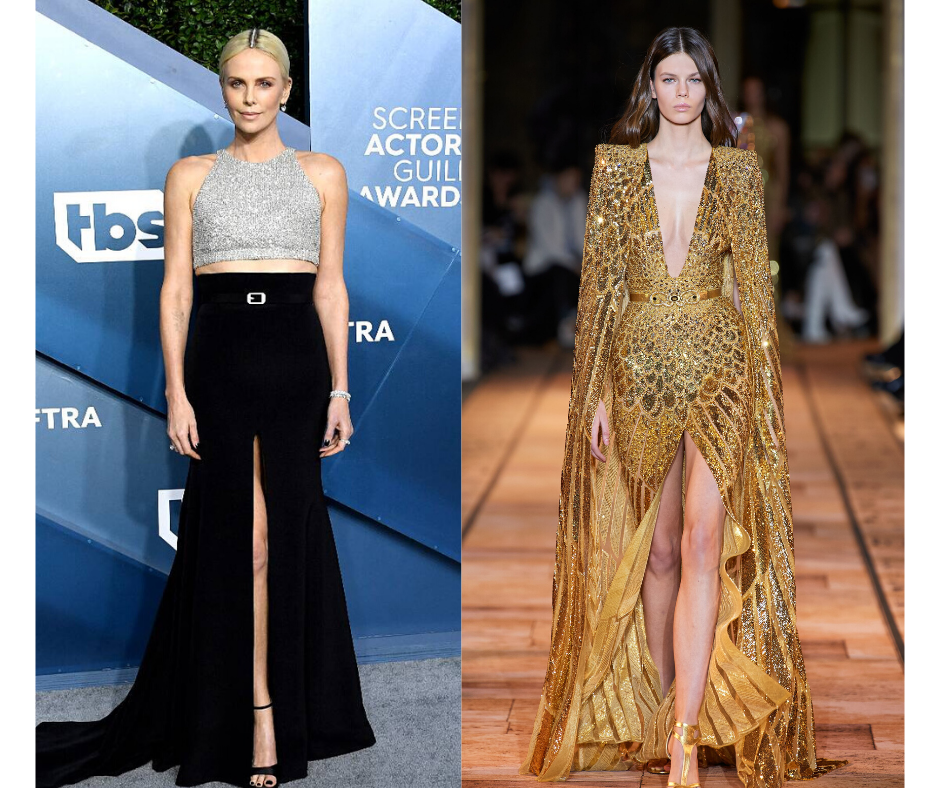 Charlize Theron regularly favours sequins and shimmer – and we hope that this year's Oscars will be no different. This beaded, lowcut Zuhair Murad gown reminded us of a spiritually similar goddess-inspired Dior gown Theron wore to the 2017 Academy Awards. 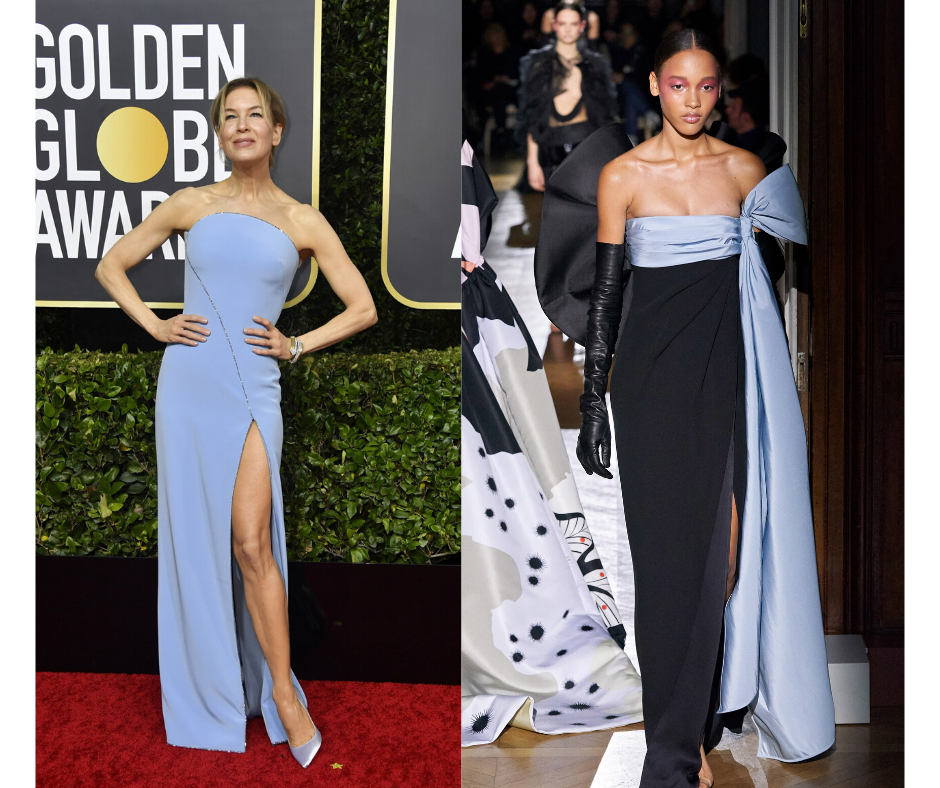 Renée Zellweger has proven her love for one-tone pastels this awards season. The star looked effortless in baby blue Armani for her return to the Golden Globes and was pretty in pink Prada for the recent Baftas. The actress, who is nominated for her lead role in Judy, could continue her colour streak in this runway look by Valentino, with its subtle pastel hue, bow and 2020's award season must-have accessory, the opera glove. 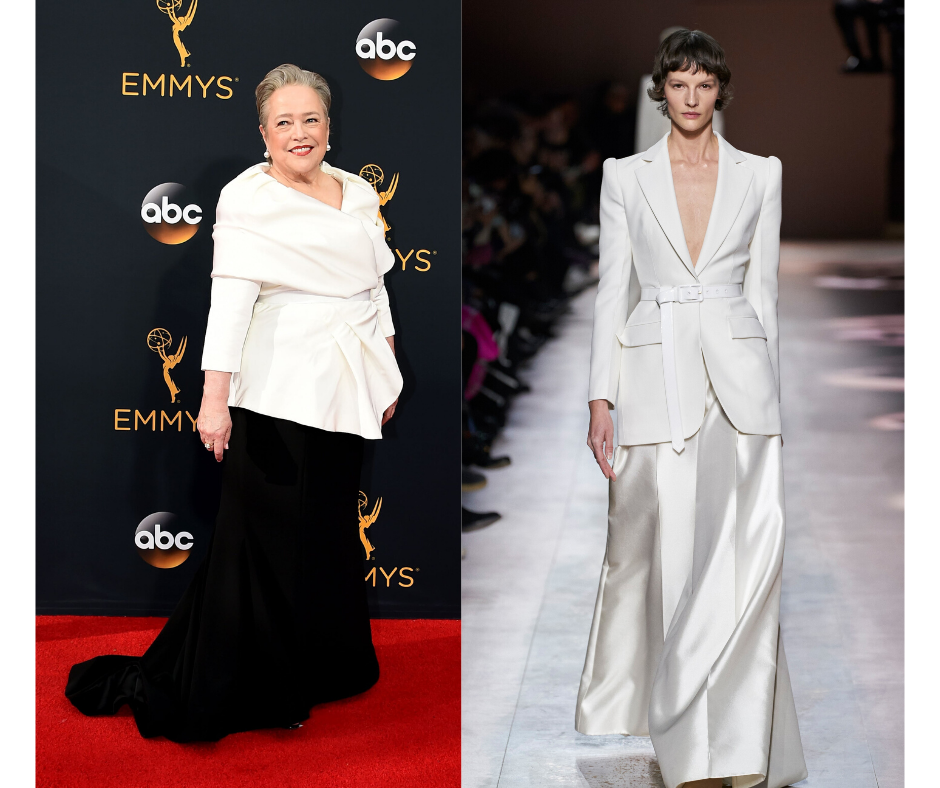 13
Kathy Bates, nominated for her role in Richard Jewell, has worn many a statement blazer over the years and often pairs said blazer with black trousers or a ball skirt. This white satin ensemble with a puff shoulder, pleated skirt and belt around the waist is a perfect fit for a star of her calibre. It’s elegant, commanding and timeless. 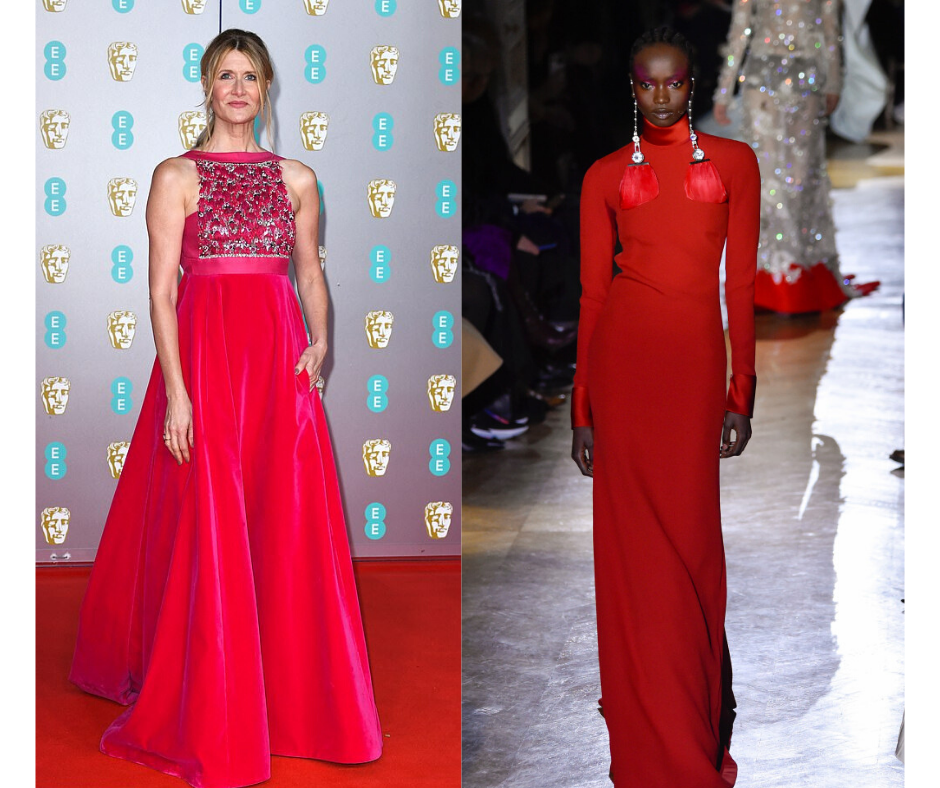 Laura Dern – who is nominated for Best Supporting Actress for her work in the wildly popular Marriage Story – always favours sleek red-carpet dresses. We can imagine her stealing the show this year in Valentino's elegant, floor-length, red number. With its open back and high neckline, the dress would make just the subtle statement the actress usually opts for. 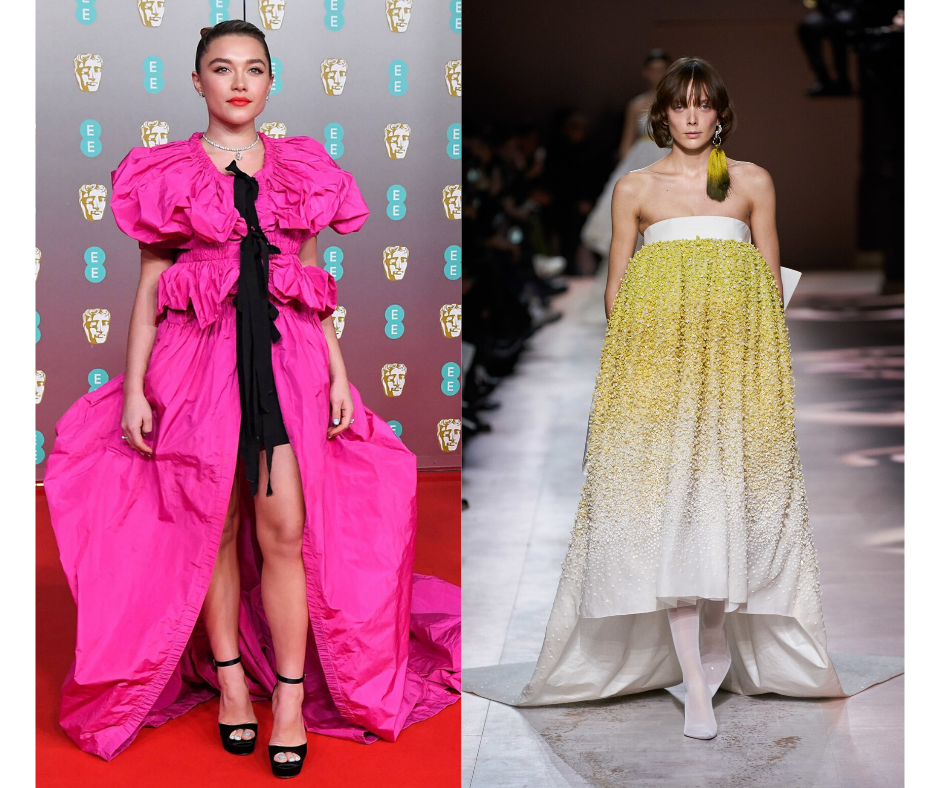 Florence Pugh is a bit of a red-carpet chameleon, rocking slim princess pastels and theatrical, voluminous jewel tones effortlessly. This strapless Givenchy dress, covered with butter popcorn-esque beading, ticks all the boxes. And it has a train fit for the breakout powerhouse that she is. 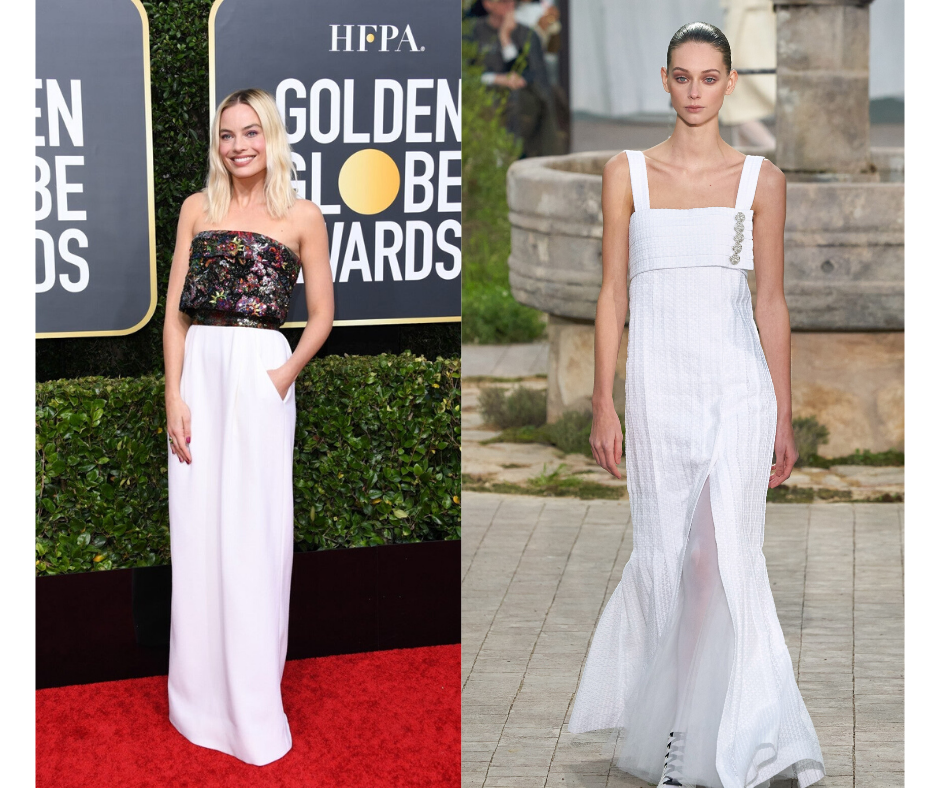 White has always been Margot Robbie’s go-to red carpet colour. A few notable examples: She wore an angelic Chanel dress to the Once Upon a Time…In Hollywood premiere, looked very bridal in Michael Lo Sordo when promoting I, Tonya and served up marble column vibes in Calvin Klein at the Met Gala a few years ago. Robbie also wears Chanel quite frequently on the red carpet plus she's an ambassador for Chanel so if she doesn't opt for this white Chanel number, we'll eat our own hat. 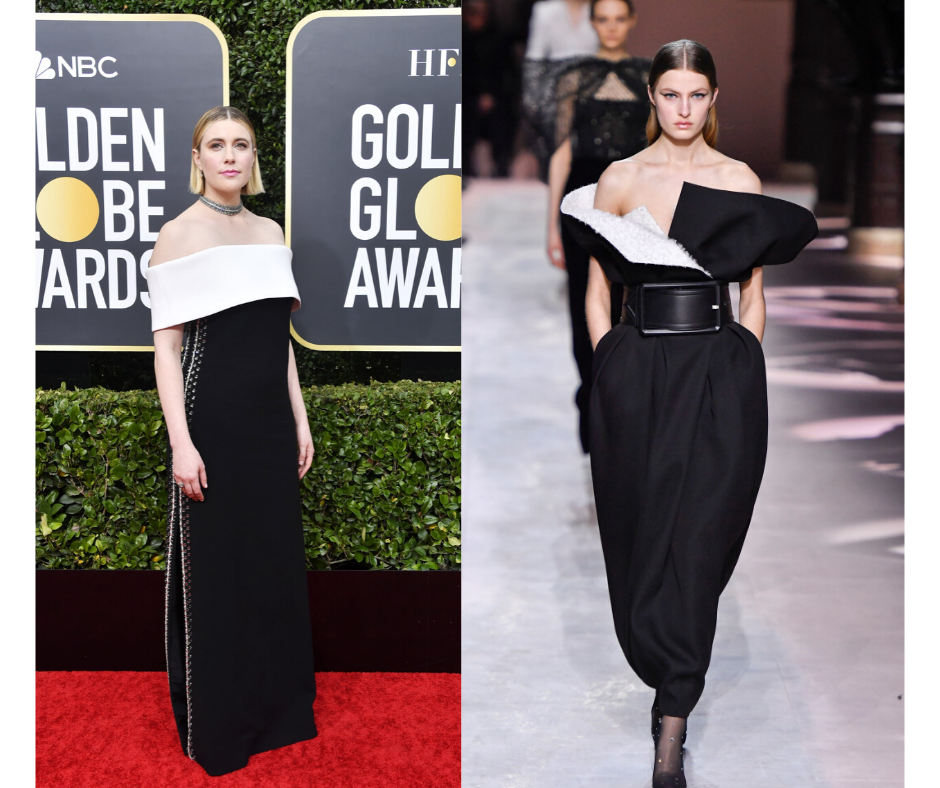 This belted Givenchy number feels like a natural evolution of the structured Proenza Schouler column Greta Gerwig wore to the Golden Globes, with its shoulder-baring bodice and stark aesthetic. 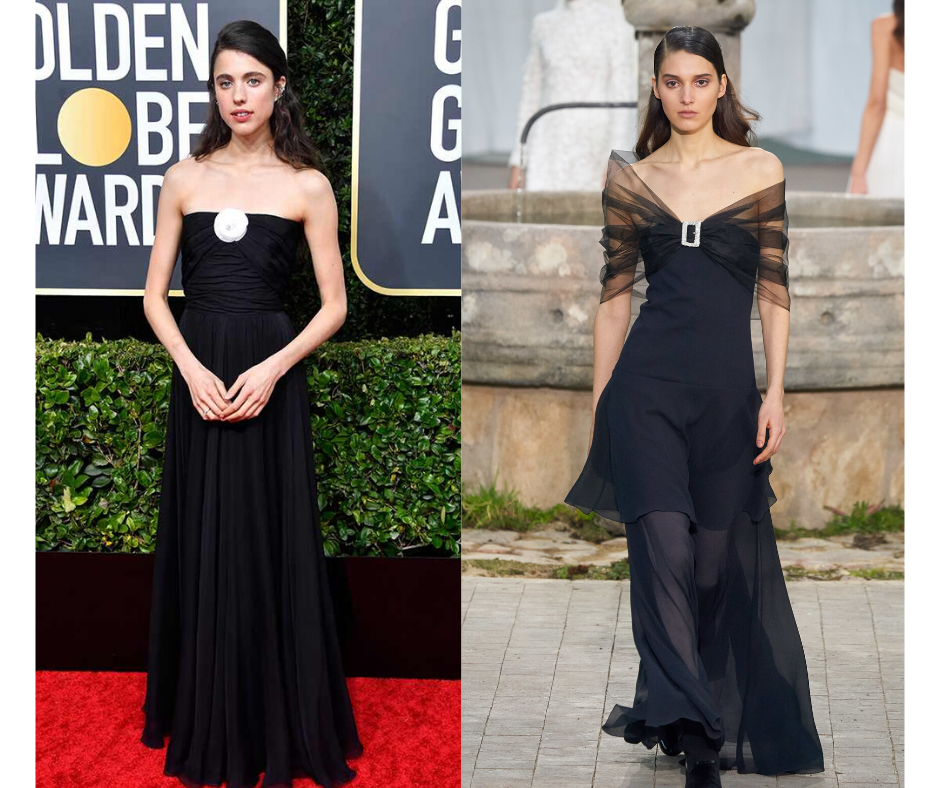 Margaret Qualley has evolved her red carpet style lately, graduating from Cinderella-esque gowns to more tailored, sophisticated silhouettes. This Chanel piece, with its buckle detail and retro-chic chiffon accent, might be a little too close to the dress she wore to the Golden Globes but the second we saw it, we thought of her. 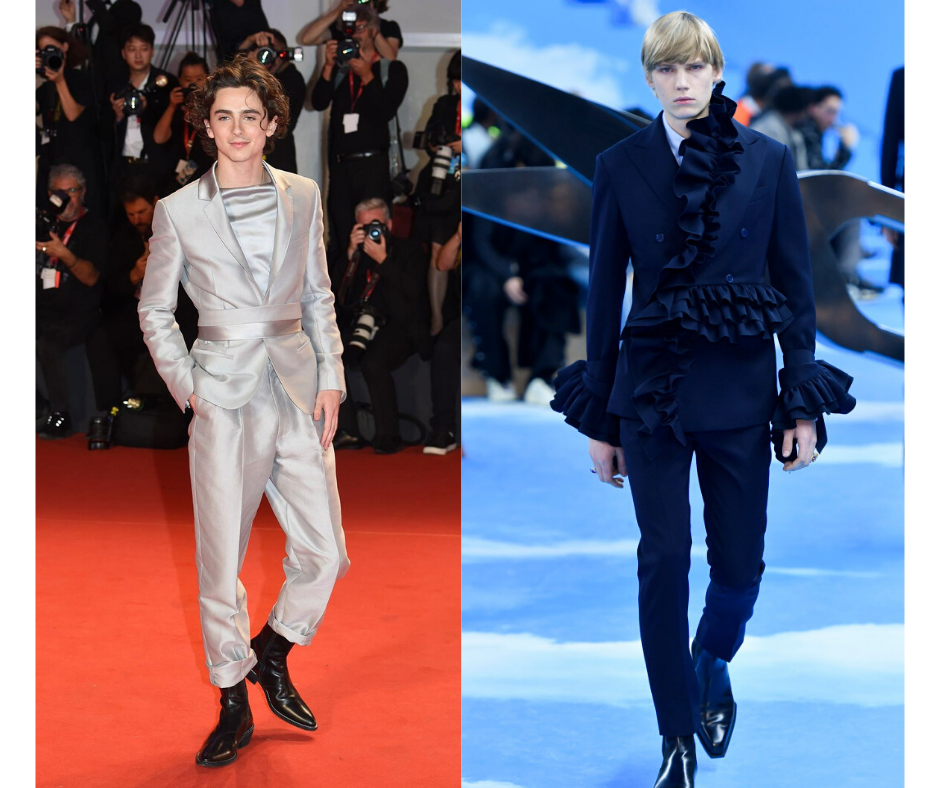 Is he nominated for an Oscar? Sadly, no. But he will be presenting an award at this year's Academy Awards so we couldn't help but do a little shopping for Timothée Chalamet. Not one to shy away from red carpet statement pieces, Chalamet wears each groundbreaking look with a level of enthusiasm unmatched by any of the other male actors of his generation. Is this ruffled, double-breasted Louis Vuitton jacket one step too far? Probably, but a girl can dream.

READ: What This Year's Oscars Nominees Wore To Their First Academy Awards