Is Seaweed The Perfect Food?

Forgive us while we recoil at the word superfood, but if anything were to deserve the title, it would be seaweed. 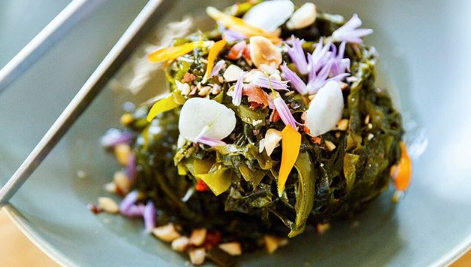 The use of seaweed in food has been gaining momentum with new food product launches containing seaweed on the rise every year since 2014.

Boasting an extraordinary amount of calcium, vitamins A, C, K, B12 and iodine, potassium, and iron at ten times the levels in land vegetables, a protein content to rival soy, and long-chain omega-3 fatty acids comparable to those in fish oil – seaweed is the crème de la crème of nutritiousness.

Amazingly, for all of its “saltiness,” seaweed is surprisingly low in sodium.

Such virtue often aligns with unpleasant qualities, like toughness or astringency (we're looking at you, kale), but seaweed's deliciousness is the stuff of sushi legacy, given that it produces that fifth taste — also in mushrooms and soy sauce, Parmesan cheese and anchovies — known as umami.

As well as being nutritionally dense and high in flavour, it’s also one of the few food sources of the less well-known mineral vanadium. Preliminary research shows that vanadium may improve the body’s sensitivity to insulin and decrease the body’s production of glucose.

Moreover, seaweed contains unique phytonutrients and antioxidants needed to protect cells and DNA against damage. Plus, it favourably alters estrogen and phytoestrogen metabolism, meaning if eaten in moderate amounts over time, it can be protective in women at risk of estrogen-sensitive breast cancers.

Trending today: NESSA: The Postpartum Recovery Range Designed Only With Mums in Mind

One last argument in its favour is ecologically inclined.

According to a World Bank report published in 2016, to maintain current consumption trends, the world will need to produce "50–70% more food by 2050, increasingly under drought conditions and on poor soils."

Seaweed farms can produce seventeen times the protein of a livestock farm with no fuel, no fertiliser, no fresh water, and no land. Seaweed sequesters nitrogen, phosphorus, and carbon, meaning seaweed farms are carbon negative. They actually improve the environment.

However, despite its lengthy list of benefits – the vegetable isn't suitable for everyone.

While seaweed is said to benefit people with hypothyroidism, it’s not a great idea in abundance for people with hyperthyroidism. Eating too many iodine-rich foods can worsen hyperthyroidism. Further, if you’re on any blood thinners, check with your doctor before eating seaweed because it’s rich in vitamin K, and blood thinners often work by interfering with the actions of vitamin K.

So, there you have it. It's practically perfect in every way... unless you have an endocrinal disorder.

For those keen to forage their own, it's worth noting that seaweed cleans toxins and heavy metals from the ocean, so the best is claimed from (or farmed in) crystal-clear coastal waters.

READ MORE: These Are The Biggest Food Trends For 2019, According To Pinterest