Why The Concept Of Gender Is Becoming Outdated

Should women with naturally elevated levels of testosterone be able to compete in women’s events? That’s the question with which athletics has been grappling over the past decade. 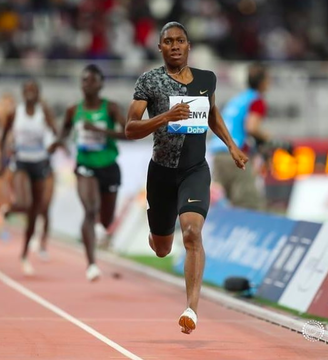 Earlier this year, the International Olympic Committee's (IOC) planned to introduce stricter guidelines for transgender athletes before the Tokyo 2020 Games were postponed, again.

According to the Guardian, discussions on the subject ran into the sand because the panel of scientists allocated to make a decision struggled to reach an agreement on such a thorny issue.

The aforementioned group had been expected to recommend halving the permitted testosterone levels for trans women competing in elite sport. However, matters have been postponed for the foreseeable due to the subject's politically charged and sensitive nature.

Under current IOC guidelines, issued in November 2015, athletes who transition from male to female can compete in the women’s category without requiring surgery to remove their testes provided their total testosterone level in serum is kept below 10 nanomoles per litre for at least 12 months.

Secondly, athletes must show legal recognition of their gender.

And, thirdly, athletes must have undergone hormone therapy for an appropriate amount of time before participation, with two years being the suggested time.

It was not until 2004 that the IOC allowed transgender athletes to participate in the Olympic Games.

A similar minefield arose in 2019 when it was announced that South African middle-distance runner Caster Semenya would not compete at the World Championships in Doha.

The decision was made by a Swiss court who stood behind an International Association of Athletics Federations (IAAF) rule that would require her to take testosterone-reducing medication.

The 28-year-old had been expected to defend her world 800m title in late September after the Swiss Supreme Court had temporarily exempted her from an IAAF rule relating to athletes with differences in sexual development (DSD).

That decision was then overturned by a tribunal at the same court.

Today, that same tribunal group met once more, with a final ruling that female athletes with a high natural level of testosterone must take medication to reduce it.

It now looks impossible for Semenya, the London 2012 and Rio 2016 Olympic gold medallist, to defend her title in Tokyo. She responded to the news by accusing World Athletics of being on the “wrong side of history”.

In June of last year, US-based transgender cyclist Veronica Ivy, formerly known as Rachel McKinnon, wrote in the New York Times that she had received far more hate – including numerous death threats – following a Twitter rant by Donald Trump Jr. about her victory at the UCI Masters Track Cycling World Championships in October.

Trump Jr. had written: "This BS will destroy women's sports and everything so many amazing female athletes have worked their entire lives to achieve.

"I couldn't care less how you identify, but this isn't right."

The people attacking her want Ivy to compete against men, but as she has pointed out on a number of occasions – she is female, and as per both the law and the rules of several cycling organisations, she is only eligible to participate in women’s events.

The sex testing debate is a complicated one which harks back to a time where men were seen to boast peak physicality.

In a time when gender binaries are finally being openly discussed – albeit reluctantly – Semenya's 'problem' in the eyes of the IAAF is that she is the owner of a body whose natural testosterone levels are produced at a higher rate to her counterparts.

Her natural hyperandrogenism – which admittedly aids her athletic performance by way of increasing muscle bulk and overproduction of red blood cells – has seen her berated, discriminated against, mocked openly and subjected to heinous racist and sexist remarks by fellow teammates.

The narrative which has been shaped around her story is often a misguided or inaccurate one.

To be clear, Caster Semenya is not transgender, but the lack of a standard for using terms like “sex” and “gender” has left many people confused about the actual circumstances of the case and Caster Semenya’s involvement in it.

Semenya’s gender is uncontroversially female. She is legally female, was from birth raised as female and identifies as a female. So, on the current definition, Semenya is a female.

She underwent medical testing in 2009, despite being told that it was a doping test, and although the results are confidential, it has been widely reported that she does have an intersex condition. It seems reasonable to assume she has XY chromosomes, but since previous rulings apply to her, they must almost certainly be in what they classify as the “male range”.

In 2020, I need you to be willing to STOP being friends with transphobes.

Stop giving people the 'benefit of the doubt' here.

Make people scared to be transphobic.

The core issue is that “sex” is different from “gender” and there are many ways a person’s sex can develop beyond typical categories for men and women.

When athletic officials try to divide athletes by sex, the line drawn changes depending on what criteria they use. Accepting the case for separate male and female athletic categories in sport – despite growing more complicated in recent times – has been met with a certain practicality that allows for all genders to flourish.

Defining who belongs to which categories has, however, created much debate.

Different methods have been adopted, from crude physical inspections to genetic tests – all of which have proven unsatisfactory. The latest in a series of intrusive probes has been that of functional testosterone trials. Testosterone increases muscle mass, strength and haemoglobin, which affects endurance.

Testosterone levels in women are, in most circumstances, lower than in men. Some competitors have said women with higher levels of the hormone have an unfair advantage. It is because of this that the IAAF decided to limit the testosterone level that makes women eligible for certain events.

The trouble is, while all-male elite athletes lie in the high testosterone bracket – a few women, such as Semenya, have elevated levels that take them into the “male” category, through no fault of their own.

As a young teen, a local coach noticed #CasterSemenya’s raw talent and pulled her aside to tell her many of the greatest athletes in the world were African. To her, he added, “I think you can be better than any of them.” Years later, Semenya’s ability to push through after the midpoint of her races, as the rest of her competitors struggle to maintain their momentum, is what would separate her from the pack. Now, she’s become one of the most gifted runners in the entire world. ✊ Tap the link in bio to trace Semenya’s steps from Fairlie, a remote village in Limpopo, South Africa, to the tracks of international fame — and scrutiny.  @danascruggs  @yashuasimmons⁠

The controversy reflects a critical misunderstanding of biological sex, interpreting it as a strict dichotomy, and how we should apply it to athletics.

This view sees people like Caster Semenya as an outlier. In fact, Semenya exists on an extremely normal spectrum of sex characteristics that we all have.

Fluctuating levels of sex hormones in men and women are natural. Having higher or lower levels of estrogen or testosterone, with overlap between men and women, is common. The forced binary between the sexes creates a misguided notion that women like Semenya are 'abnormal', that her testosterone level was a glitch that should be fixed. In reality, Semenya exists within the normal curve of testosterone fluctuations among women.

The concept of a physical inclination to a sport, hobby or career is not a new one. By its very nature, it's natural – and by media standards, it's lauded.

Michael Phelps is frequently hailed as 'The Man Built To Be A Swimmer', due to his long torso and webbed feet. NBA All-Star LeBron James is 6 foot 8 inches with a wingspan of seven feet. Teammate Dwayne Wade is 6'4" -- his arms are 6'11" across. Semenya being asked to drug herself to lower her testosterone levels to compete is as ridiculous a concept as asking seven-foot-tall basketball players to chop their legs off at the knee.

Her case is yet another of women's bodies being policed for something they neither had control over nor want to be 'regulated'. For Semenya – fast, female, and an openly gay POC – her fight isn’t just for her self and her own dignity and freedom, but for her country and her fans.

“It’s not about performing; it’s about inspiring the world, changing the world…changing how people see life,” she tells Out Magazine.

“When I walk on the track is when I feel free.”

READ MORE: The Cyprus Rape Case – Here's Everything You Need To Know