Do CBD Supplements Actually Help To Quash Anxiety? We Asked An Expert

CBD: The most-buzzed about wellness ingredient of the moment - and perhaps, also the most poorly understood. 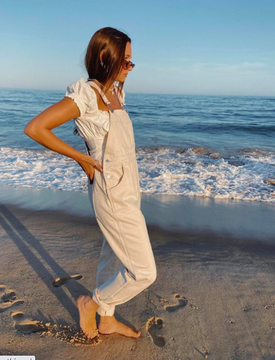 This year cannabis culture began to change around the world.

It's hard to say the precise moment when CBD, the voguish cannabis derivative, went from being a fidget spinner alternative for stoners to a zeitgeisty desert island pick – but the naturally occurring compound has recently become ubiquitous and shows no signs of stopping.

The stats show a similar state of affairs: the US CBD (or cannabidiol) market is set to reach 1.8 billion US dollars by 2022, from half a billion dollars in 2018.

Far from it being just a whole load of millennials on a mad CBD tirade, actually it’s our friend’s mums, our bosses, and our grandmothers, no less. As well as this, it’s being heralded as the (potential) saviour of our anxiety and general mental health woes.

Found in the resinous flower of cannabis, CBD has gained a lot of publicity for its natural benefits, specifically in cosmetics and wellness products. When added to products in oil form (cannabinoids), it can bind to skin receptors and help with inflammation, oxidisation, and pain, as well as provide soothing sensations.

The scientific community has researched deeply about the cannabis plant and discovered that it can help in improving brain health quite effectively.

CBD interacts with the body’s endocannabinoid system, one of the body’s regulatory systems that helps to control everything from mood to memory, stress to sleep and reproduction - lots of different things. While it is commonly employed to tackle insomnia, anxiety and physical pain, it's also used to tackle more serious illnesses, like epilepsy - all while being totally clean, non-toxic and crucially not addictive.

THC, which is the psychoactive ingredient found in marijuana, isn’t present in CBD in any real way (occasionally there are traces, but they won’t have the same effect) so far from it being a ‘stoner’ ingredient, it bridges the best of both worlds.

Trending today: Is CBD Oil Just Another Crutch For Our Collective Anxiety?

The sale of CBD has been legal across the UK since 2016 and high profile advocates include actress Jennifer Aniston, who takes it for pain, stress and anxiety and Back to the Future actor, Michael J Fox, who uses it help with his Parkinson's disease.

Closer to home, Vera Twomey worked tirelessly to obtain a special license to grant the use of cannabidiol (CBD) oil and tetrahydrocannabinol (THC) oil to help alleviate the symptoms of her daughter's Dravet Syndrome.

But, what can one ingredient actually do to help ease the pressure on the collective mental health of a nation?

"CBD works on a lot of levels in the body,” says scientific advisor Julie Moltke, whose book A Quick Guide To CBD came out in June.

“It interacts with – and balances out – the endocannabinoid system, as well as the serotonin system, which are involved in anxiety and depression," she tells British Vogue.

Studies have also shown that CBD can help to reduce anxiety, as well as aid those with disorders like PTSD, OCD and SAD.

The majority of people use it for anxiety relief, but it can also be used for inflammation, pain relief, endometriosis… and it’s even been medically proven to help the symptoms of epilepsy, as is the case with Ava Twomey.

“It slows down the mental overload that comes with anxiety and stress, conditions in which thought patterns can become repetitive. CBD helps create a bit more space in the mind,” says Moltke.

Taking CBD helps it to settle, she says. “Put simply, it regulates some of our innate systems in the body, creating more space and calming the mind.”

Sounds like the perfect remedy for our fraught minds right now. Looking to try?

"The CBD Farmacy’s range offers full-spectrum oils which contain not just CBD, but other useful phytocannabinoids, terpenes and flavonoids which work together in synergy," he said.

"We produce our products locally and provide oils that are organic, non-GMO, vegan-friendly and derived by supercritical extraction methods which produce the purest oils."

"The CBD Farmacy makes strict brand promises that our products are of consistently high quality and we will display a full lab analysis showing a detailed cannabinoid profile for each range and batch of oils. This proves authenticity but also aids reliable dosing," Mr Geraghty added.

For those on Team Wellness, CBD-infused drinks (coffees, soft drinks, teas), daily capsules and oils are the order of the day. The Hemp Company (based in Ireland) have plenty to choose from including a CBD Infused Extreme balm which some say cures high heel ache.

Oils can come in a myriad of ways – and flavours – meaning you can dispense a droplet into your coffee or lather on your face before bed. Some even swear by taking it under the tongue, because then it’s absorbed directly into the bloodstream

So whether it's a capsule, tincture or a drink, now might just be the time to get high off your own supply.

READ MORE: Niksen Is The New Hygge – Here's What That Means