10 Common Cooking Mistakes That Are Ruining Your Pasta, According To Top Chefs

We're facing an indefinite amount of time in our homes –– may as well learn how to perfect your tagliatelle.
Irish Tatler Staff 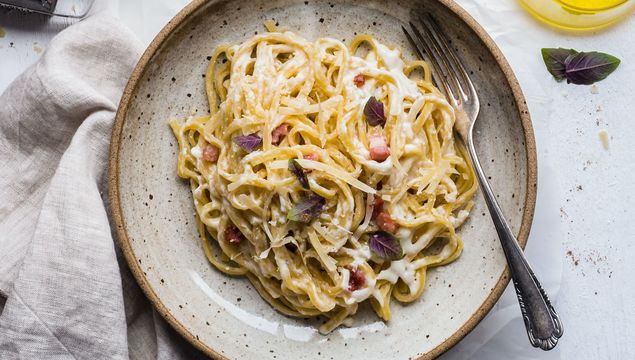 Sorry, it's not a simple as boiling water and dumping some dried fusilli in.

For those of us who spent our university years living on a diet of penne and pesto, pasta may not excite you in the same way it does most.

But, what if we told you that you could easily prepare restaurant-worthy pasta from home –– in a far simpler way than you previously thought?

As it turns out, there’s actually a lot more to cooking the Italian staple than tossing it into a pan of water and leaving it to do its thing.

If there is not enough water, then the pasta will become mushy and sticky. To quote Nigella Lawson: “The pasta should be able to move around a little in the water so if you are cooking larger quantities of pasta then you will need a large saucepan or stock pot.”

2. Boil water before adding the pasta

Only once it’s reached boiling point should you add your pasta –– and when you do so, do so slowly, as this will keep it from forming a large clump at the bottom.

You should stir the pasta once it is added to the water to keep it from sticking together. This will also make sure that it cooks evenly.

Guido Pedrelli, the founder of Nonna Box, recently set the cat amongst the pigeons when he announced that there’s no point in adding oil to your pasta’s water.

“There is a common myth that oiling the water your pasta is cooking in will prevent it from sticking, but this is untrue,” he tells Metro. “In fact, oil and water do not mix, so it is unlikely that any oil will transfer onto the pasta during the cooking process.”

And the worst part? Well, if any oil were to attach to the pasta, it would be after the cooking process when the pasta is being drained… and it has a detrimental effect.

“It will prevent the sauce from sticking to the pasta,” she says.

The Italians have a word "sciocca" – which means both that their pasta lacks salt and "silly".

And, while there’s no scientific reason to add salt to your water (none of this boiling point nonsense is real), it simply makes the pasta taste better.

That’s right: salted water flavours the pasta from the inside out as the pasta absorbs the water, leading to tastier pasta. So don’t be a silly goose and make sure you add at least a pinch of salt to your water when you’re cooking up your next spaghetti feast.

To quote Gino D’Acampo: “Always buy dry pasta, not fresh. 90% of Italians use dried pasta as it keeps its al dente shape more perfectly when cooked.”

When in doubt, follow this rule from Lawson: “Bring your water to the boil, add salt, then tip in the pasta, stirring well to make sure it’s all in and not clumped together. Once the water comes back to the boil, let the pasta cook for two minutes, then turn off the heat, cover the pan with a clean, thin tea towel (not a waffle-textured one) and clamp on a tight-fitting lid.

“Let the pasta stand like this for as long as the packet tells you to cook it normally (usually seven minutes). When the time is up, drain the pasta, remembering to remove a small cupful of cooking water before doing so.”

8. Don't rinse your pasta after cooking

Perhaps the most perplexing activity when it comes to pasta cooking is the washing away of starch when your pasta comes off the boil.

According to Giada de Laurentiis (via her cookbook Everyday Pasta), “the starch on the surface contributes flavour and helps the sauce adhere.”

Starch is important here – don't fall at the final hurdle and jeopardise your sauce.

9. Never ever throw pasta against the wall

If you've ever had trouble telling if your pasta was finished cooking, maybe you felt tempted to try the old trick of throwing it against the wall. Supposedly, if the pasta sticks to the wall once it's thrown, you're good to go. Turns out, this is a pretty huge mistake. Cookbook author Marcella Hazan told Rachel Ray that trick is purely a myth. "The only way to know if it's done is to taste it! It should be al dente, or firm to the bite," she explains. "The more pasta cooks, the gummier it gets, so if it sticks to the wall it's probably overdone."

Once your pasta is cooked, hang on to a cup or more of the cooking water. This water is now starchy and full of pasta flavor, and it just might come in handy. Associate food editor Sherry Rujikarn shared with Good Housekeeping that keeping some of this magical water on hand is always a good idea. "You probably won't need it for super saucy preparations (think marinara or bolognese), but for anything that's a bit drier (like olive oil-based sauces) or creamier, adding a splash or two of cooking water is the perfect way to take clumpy and dry sauce to luxurious and silky," she explained. "The water helps loosen up the sauce so it can coat every noodle, while the starch in the water helps it cling to the pasta better."

READ MORE: Buy Now, Eat Later: The Pantry Staples Worth Stocking Up On