Easkey Britton On Gender Inequality, Eco-Swaps And The Power of Saltwater

"My favourite way to connect with the sea is actually just to spend time with it. I call it a 'sit stop', but before I even go surfing or swimming or anything, I just like to sit and observe the waves. By doing that you can tune into the movement and the energy of the sea and almost read the ocean." 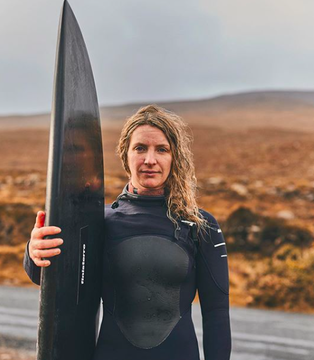 Ahead of Moon Medicine, a virtual gathering for Ireland's spiritual elite, Irish Tatler talks to multi-hyphenate Easkey Britton about sea benefits, listening to our bodies and the connection between women and water.

As the legendary story goes, in the 1960s, a hotel owner named Mary Britton returned to Ireland from a trip to California determined to bring two Malibu surfboards back to her local beach, Rossnowlagh.

Her intention was to offer them to hotel guests, but instead, her five sons took the boards to the waves, making the Britton boys some of the first pioneers of Irish surfing.

One of those boys grew up and became father to Easkey Britton, one of Ireland's premier big wave surfers. Her dad, Barry, remains her number one surfing companion.

"So, I started surfing about the age of four and have had an obsessive love affair with the ocean ever since," she laughs.

Despite being the first Irish woman to be nominated for the Global WSL Big Wave Awards, there’s more to Easkey than surfing. A true multihyphenate, her intellect and quest to learn, change and create newness in an often unfair world has come to define her of late.

A scientist, academic and social activist, with a PhD in Environment and Society, Easkey's passions centre around the ocean and creating equality in a world where polarity often reigns.

"It's interesting because people often ask me what it's like to be a woman in a male-dominated arena," she tells Irish Tatler. "And I get it, I can understand how it can feel like a bit of a boy's club from the outside, but, as cheesy as it sounds, once you're in the ocean, there's no judgement.

"I think for me it's a little different because I was born with it. I have such a familiar relationship with the sea, I mean I still surf with my dad all the time. Saying that I just went out to my local break and of a group of twenty, there were two women."

While barriers to women's involvement in sports are both numerous and complex, the physical activity gap between boys and girls begins early. A report from Sport England found that girls aged 3–11 years experienced less enjoyment from physical activity and less confidence in their sporting ability than boys as they got older.

By the age of 14, girls withdraw from playing sport twice as fast as boys, according to the Women’s Sports Foundation. Research also shows that girls’ participation in sport nosedives after the onset of puberty. Fewer than 10% of girls aged 13 to 16 meet government guidelines for physical activity, while 64% will stop playing sport completely by the age of 18.

"For me, it didn't happen because I've always been so obsessed, I'm literally in love with it, it's been a constant driving force for me," she says.

"It's heartbreaking for me to see young girls drop out of sports in the years of early womanhood, especially because it's such an antidote to stress and frustration. I definitely felt it as my body changed and I grew into a woman."

It was about that time that Britton was actively competing all over the world and found fault with some of the logistical difficulties of being a woman in sport.

"I remember, as a teenager, when I would surf in competitions – often in tropical waters – and would be scared to get in the water if I had my period, in case I leaked and sharks were near! The boys just never had that."

Easkey's love affair with the water goes well beyond exercise. Citing her bodily connection with water ("especially saltwater") her homegrown passion has shaped her life somewhat, leading her to complete a PhD in Environment and Society.

It was during this time that her hunger for change took her to southeastern Iran to kickstart what has now become a surfing nation.

"On a personal level, it altered my whole relationship with surfing, which is something I really didn't expect.

"It came about because I was in a stage of my life where I was getting a bit burnt out and disillusioned with the commercialisation of surfing. I was much more interested in using surfing as a vehicle to connect and explore a place and a people, rather than just arrive at a competition, stay on a beach and live in a bubble.

"I was in the middle of my PhD and wanted to throw myself into a situation where change could be made."

She did this by pairing up with two Iranian sportswomen – pro snowboarder Mona Seraji, and diver, Shalha Yasini – teaching them the ropes of surfing, and subsequently elevating a woman's role in society. “Once you get in the water the rules and norms of society dissolve and the power of the ocean to connect and spread happiness is huge,” she said at the time.

"I go back every summer to run training workshops and water safety classes in a sustainable way – i.e. from the grassroots up – and we've also brought over surf equipment in recent years."

Closer to home, the Donegal-native has been delighted to see the fervent enthusiasm with which Irish people have taken to the sea since March.

"I've really noticed a difference in sea swimmers this year, and it's funny, kids have no problem getting in but people in various stages of adulthood get a bit nervous when it comes to the sea.

"For those who are a little uncertain, getting a swim buddy or two definitely helps you stay accountable. My favourite way to connect with the sea is actually just to spend time with it. I call it a 'sit stop', but before I even go surfing or swimming or anything, I just like to sit and observe the waves. By doing that you can tune into the movement and the energy of the sea and almost read the ocean.

"Although, if you struggle with being still, mindfulness or meditation, then jumping in the sea is an instant way to presence yourself and be in the moment. Our bodies are hugely stimulated by cold water – it basically fires up all cylinders inside by working to keep warm and gives you a huge boost!

"I know some people think this is crazy, but if you can stick it, I would recommend turning the shower dial to cold for a minute," she laughs. "It'll change your day entirely."

As an activist, social scientist and staunch believer in Blue Health – how bodies of water benefit those living around them – we felt it would be remiss not to ask Easkey for three easy swaps to make to ensure we all live greener lives.

"Well, first of all, I have to suggest switching to a greener energy company – it's something I just did last month," she says.

"Secondly, be more aware of what type of clothes you're buying. I would recommend staying away from synthetic fabrics and toxic dyes, all of which pollute the ocean. As often as possible, look for natural fabrics that are traceable.

"And finally, food-wise. It's as easy as supporting local. If it has to come from far away, then the likelihood is that it has a pretty big carbon footprint. Shopping local is also really important at the minute."

"There's real power in those choices, I hope that helps."

For those interested in hearing more from Easkey, she will this week be taking part in The Trailblazery's event Moon Medicine: "a circle that invites women to rise and lift each other up along the way".

As we navigate global uncertainty, The Trailblazery – curators and hosts of critically acclaimed events and movements including Census of the Heart and We Need To Talk About Ireland – is hosting a series of monthly empowerment and wellness events for women themed around the cycles of the moon entitled; Moon Medicine.

The latest instalment is hosted by founder Kathy Scott and features social ecologist, water-woman, writer, film-maker, menstruality mentor and ocean leader with a PhD in Environment and Society Dr Easkey Britton as the guest luminary and welcomes the eclectic folk sister duo Leah and Chloe Smith of Rising Appalachia.

The online event is called Women and Water: Turning the Tides and takes place via Zoom on Thursday, October 1 at 7pm. More info here.

READ MORE: 'Clean Sleeping' – The Routine Set To Give You Your Best Night's Sleep Ever

READ MORE: How To Cope With An Anxiety Pandemic, According to A Clinical Neuropsychologist