Why One Should Never Underestimate Kim Kardashian West

Does the backlash from her latest move say more about us than it does about her?
Kate Demolder 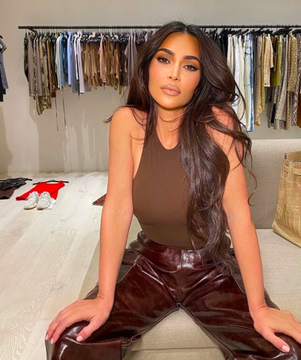 There are very few things in this world that Kim Kardashian hasn't done.

Thrust into the spotlight from a young age, the second daughter of Kris and Robert deals repeatedly with tragedy in her stride.

Amid the height of the OJ Simpson trial – where the Kardashian name was first made known –rumours swirled about her sister's rightful lineage, her father's commitment to his client and all the while, both of her parents were going through a very public divorce.

In the meantime, she has seen family members scrutinised, dealt with countless and personalised reams of hate mail and has even had stalkers watch her every move.

She – a mother of four, no less – would be forgiven for deleting all social media and living a life of peaceful silence. Instead, she has created empires and even liaised with political movers and shakers to grant the greater good.

So, why is it that when she announces a keenness to pursue further education that the world stops and shames her?

Happy Birthday dad!!!!! This was my Sweet 16 and this is the moment my dad surprised me with my first car! I wish you were here so badly so we could have so many more memories! We are all missing you and celebrating you today!

The internet thinks it's cool to hate Kim Kardashian West.

From her reality TV beginnings to her marriage to the oft-problematic Kanye – her life seems almost solely created for public consumption. Almost every one of her moves – of those she wants us to see – are documented in a social media capacity, deeming her the master puppeteer while also subsequently allowing us to think that we control our viewpoint.

A shrewd businesswoman first and foremost – to the naked eye, Kim has seemingly relinquished control of her scandalous life, while also making sure that every piece of her social media puzzle is put into place.

Kardashian announced earlier this year that she began a four-year apprenticeship with a law firm in San Francisco last summer and wants to take the California bar exam in 2022. Under California law, aspiring lawyers can undertake an apprenticeship and if they pass the bar exam, they can practice law -- even without a law school degree.

"First year of law school," Kim Kardashian West told US Vogue in her May cover interview, "you have to cover three subjects: criminal law, torts, and contracts."

"Torts is the most confusing, contracts the most boring, and crim law I can do in my sleep. Took my first test, I got a 100. Super easy for me."

The queen of reality television's pivot to becoming a lawyer — apparently motivated by her stated desire to do more to improve the criminal justice system – is, in many ways, the most interesting choice she's ever made.

The aftermath of her decision's publication, however, has prompted a mixed response. Many have predictably derided the move as idiotic, telling her to stay in her lane.

Others have called the criticism sexist, highlighting the obvious comparison between Kardashian and Reese Witherspoon's character in the 2001 movie "Legally Blonde," Elle Woods -- also initially dismissed in her law school efforts because of her looks and past persona.

There are, however, a number of ways in which this path makes a great deal of sense for the mother-of-three.

She has already demonstrated an interest in the law, making herself heard on criminal justice issues and playing a significant part last year in President Trump's granting clemency of Alice Marie Johnson, a 63-year-old woman who'd been in an Alabama prison on a nonviolent drug charge since 1996.

Her meeting with Trump, alongside CNN commentator and activist Van Jones, plus several lawyers, Kardashian West helped persuade the President with a force of argument Jones described as "the most effective, emotionally intelligent intervention that I've ever seen in American politics."

She also boasts work with #cut50, a bipartisan advocacy group aiming to reform the criminal justice system. Compared with some of her other ventures -- advertising gummy bear hair products and Skinny Fit tea to unsuspecting teenagers -- this looks not just like a step in a far more positive direction, but a break from the brand the Kardashian family has built over the years.

As far as her transformation from polished hypebeast to woke legal representative goes – only time will tell.

If her previous dogged determination is anything to go by – not to mention the acquisitive tendencies of her mother – within the next decade we will see Kim capitalising on the family name in terms of a powerful law firm.

For now though, as a woman whose career is based wholly around sex appeal and social media – not to mention the fact that she is about to become a mother for the fourth time –Kardashian's next move is a brave one, given the fact that she's dipping a toe into a skill set not yet attempted by the social set.

Always finding humour in the madness, Kardashian West seems to be flying in the face of expectations with a habitual grin.

When asked by Vogue what she will be remembered for, she replied aptly, "For my many talents."

READ MORE: These Are The Women Fighting Fascism In Eastern Europe