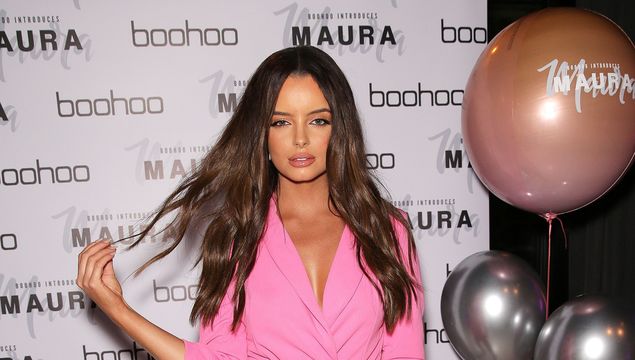 There is a reason the entire world wants Maura to be their best friend.

Even if you were not lured into the Love Island summer craze like most of us – I admire your willpower – Maura Higgins has most likely appeared on your radar at some stage.

We were first introduced to the funny, outspoken and absolutely gorgeous Longford-native on the global phenomenon reality show where she championed female empowerment and unapologetically maintained a no-BS attitude.

Maura revitalized the idea of the modern woman demonstrating that underneath the glamourous filters of social media lies a genuine personality and a true voice blissfully ignorant of society’s expectations.

Despite placing fourth on Love Island alongside dancer beau, Curtis Pritchard, Maura seems to be winning in all other aspects of life and has easily become the most successful cast member.

The Maura obsession can be credited to her refreshing ability to stay true to who she is, a trait that had us eager to secure five minutes from her busy schedule to get to know her more – and of course uncover which lipgloss she uses.

Maura, we LOVE that you know your worth and won't settle for anything less, what dating advice do you have for Irish Women?

You know what? Before the villa, I was only on one first date so I actually don’t have much dating experience, I’ve never been on dating apps or anything.

I’d definitely recommend Love Island. I came out with a man, so I’m happy.

What do you think of dating apps?

I wouldn’t say no to them. I’ve just never needed to go on one. I’ve been in two long term relationships so that’s the reason I haven’t tried them.

What is it like being away from Curtis so much when you are both so busy with work?

I mean, it’s not hard. I don’t find it hard because I am kept busy and he is too.

Obviously, it’s very different since coming out of the villa and you are with each other 24/7, but this is a normal relationship. You are not going to see each other every single day, it’s a new relationship, so yeah I don’t find it hard at all.

How are you feeling about being signed up to Dancing On Ice?

Very excited but obviously a bit nervous because it’s terrifying. I don’t go to the gym so I think my body is going to take an awful toll but I’m very excited.

What has been the most surreal experience since leaving the villa?

Oh my god, the airport, we hadn’t seen as much as a dog and the reception there was so surreal. Even shopping, you can’t go shopping.

Did being on Love Island teach you anything about yourself?

I learned actually that I was very competitive. I never realised I was. Doing the challenges, I always wanted to win which was quite strange.

I remember you fill out forms before going into Love Island and one of the questions was, ‘Are you competitive?’ and I said, ‘Absolutely not’. Yeah, so I was very much wrong.

How did it feel when you came out of the villa to know that you had caught the attention of so many Hollywood stars like Amy Schumer and all these other stars?

I didn’t believe it for ages. I was told the night of the final before I ever got my phone back, it was actually Caroline Flack that told me.

I didn’t believe her, I thought she was having me on. It wasn’t until I got my phone back and had seen the video, I nearly fell off the chair. I couldn’t believe it. I never would have thought she watched Love Island. It was so surreal. Unbelievable.

The fans loved you because you stood up for yourself on the show, why is it so important right now to be a strong woman?

It’s so important. I stand by that. When I was growing up my parents always told me to stand up for myself no matter what.

In school, I had a hard time but I still never backed down. For me, I just think it’s the most important thing for women to stand up and speak your mind, don’t be afraid.

Everyone is their own person, be yourself. Don’t try and please people, that’s the best I can say about that.

How did you feel when you came out of the villa and found out that your Mammy is a national treasure?

It’s crazy, and Mammy is actually a very shy woman. I remember when she came into the villa and she was talking to me, she couldn’t even get used to having the little microphone on.

She kept thinking it was an insect and she kept hitting it. She was a bag of nerves when she came in, bless her. It’s amazing, and she has such an amazing personality. I am the way I am today because of my Mammy so I am very happy about it.

So lovely meeting up with a few of my fellow islanders last night.... @savagegardenldn thankyou for having us

How supportive has Curtis been of you joining Dancing on Ice?

He’s very supportive. Again, I don't think it’s going to be hard. We’re both busy but we still make time to see each other and that’s the most important thing.

Lastly, WHAT lipgloss do you use?

You know what, I get asked this question a lot. I don’t use a specific lipgloss. I wear so many kinds of lip glosses. I could one today, a different one tomorrow, whatever I find in my make-up bag.

READ MORE: How To Dress For Your Rehearsal Dinner, According To Hailey Bieber