It's not often a high-intensity racing drama features a female with integrity and grit. Enter, Mollie Miles.
Irish Tatler Staff 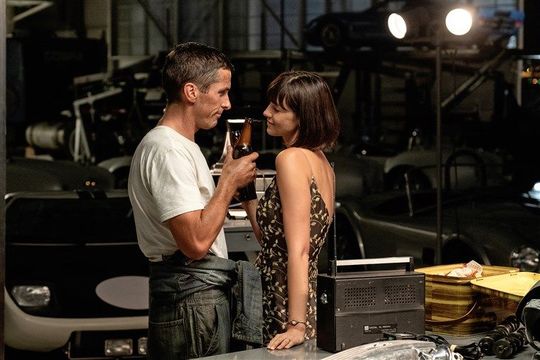 Le Mans 66 made its debut at the Telluride Film Festival back in August before getting a splashy premiere at TIFF in early September.

It follows the rivalry that scorched around the track of the famous 24-hour racing competition between the Ford and Ferrari teams, in which Bale plays Ken Miles and Damon is Carroll Shelby on the Ford team.

Visionary American car designer Shelby and the fearless British driver Miles together battled corporate interference, the laws of physics, and their own personal demons to build a revolutionary race car for Ford Motor Company and take on the dominating race cars of Enzo Ferrari in 1966.

Balfe plays Bale's wife, who is also an accomplished driver, while A Quiet Place breakout star Noah Jupe will play Bale’s son, worried about the dangers his dad faces on the track.

Director James Mangold was aware of the giant, juddering cliché that Mollie might be another standard movie wife, listening to the radio fearfully for updates of her husband, and he was keen to avoid it.

"She understood what her husband did," he tells Empire.

"She had been with him since before the war. She knows exactly who she married and wants him to fulfil his own dream, which he’s entering middle age having not had a chance to fulfil. She knows it haunts him. It’s a destiny for him on the track that he’s never had to fulfil. It’s a really unique relationship. She’s fabulous in the movie."

What's remarkable about Mollie is her strength. She, a fellow driver, gave as good as she got, something that's since been echoed by Balfe herself.

"They're true friends aswell, their marriage is a strong one, they have great teamwork – that's one of the key components about this film is teamwork," she said at the TIFF 2019 conference.

"It was nice to play someone who was, maybe in the background a little, but she's very much an important factor in everything Ken went on to achieve."

"Mollie puts so much on the line and is so enthusiastic and supportive of Ken," Christan Bale, Balfe's on-screen husband added.

"She would write articles in car magazines and was very knowledgeable about it. She truly loves him and he truly loves her so what makes her mad most [in lieu of the dangers of racing] is that he's not being truthful. She wants him to say what are his real desires, what's really going on in his mind, no matter how much trouble that's gonna cause.

"He could not have done that without Mollie." he concluded.

For those keen to see how the racing flick will fare, the Academy Awards will take place on February 10 at 1am (GMT).

READ MORE: Caitriona Balfe Reveals How She Maintains A Healthy Approach To Ageing