One To Watch: Niamh Algar On Fashion, Calm with Horses, And Shaving Her Head

From Mullingar to Hollywood isn't a path that's often tread, but Niamh Algar has successfully taken it. 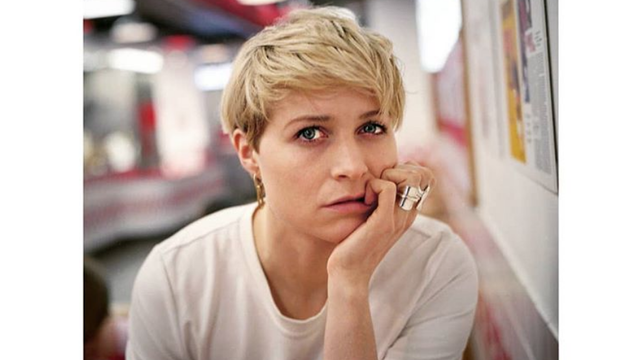 She’s been name-checked by BAFTA and has been hailed by Netflix as a rising star: Mullingar actress Niamh Algar is one to watch.

From Mullingar to Hollywood isn't a path that's often tread, but Niamh Algar has successfully taken it. From starring in a Chanel 4's The Virtues to securing a role in Ridley Scott’s major new HBO series, Raised By Wolves, Algar is certainly making a name for herself. So much so that the Irish actress was named as one of BAFTA's rising stars of 2019 and  was hailed by Netflix as the next breakthrough act.

Her latest film, Calm with Horses, was released at the start of the lockdown, yet despite not being able to show in cinemas, it still received massive support from audiences. If you didn’t get the chance to catch it before the cinemas closed (again), don’t fret – it’s arriving onto Netflix this Monday, October 26 so you can view it from your sofa (and we can attest, it’s an incredibly moving film). In it, Niamh plays Ursula, mum to five-year-old Jack, who has autism and is the son of Arm (played by Cosmo Jarvis). Barry Keoghan also stars as a member of the drug-dealing Devers family, which Arm reluctantly works for.

We (virtually) caught up with Niamh to talk all things fashion, film and fame.

The IFTAs 2020 celebrations from the set of filming #MyNameIsLizzie🎬 Thank you to the amazing cast and crew of Story films for making it so special. Thank you @iftaacademy for such a memorable night! 🎉🎉 #pizzapizzapizza

Q: You’ve been acting since you were a child. What do you love most about it?

"The freedom to get lost in a story and explore interesting characters. Between action and cut is like a reality respite, that time belongs to you. It’s a feeling I can’t comprehend, it’s quite addictive."

Q: The Virtues was a huge success but it was a tough storyline – and your new film, Calm with Horses looks to be just as raw. Are you particularly drawn to that sort of story?

"I think I’m drawn to truth. I grew up watching (The Virtues writer/director) Shane Meadows’ work and it was one of the major reasons I got involved in acting. I love portraying characters with grit, characters who usually have the odds stacked against them and who have to power through.

Q: Tell us a little about Ursula, your character in Calm with Horses?

"Ursula is the voice of reason in the story, she’s the focus of stability in Arm’s (Cosmo Jarvis) life, she still loves him but hates the man he’s become. Ursula has a chequered past, but since the birth of her autistic son Jack, she puts his needs first. She’ll do anything to protect her son."

Q: You’ve sported very different looks in roles, do you like being able to be a chameleon?

"Absolutely. The most important part of being an actor is the ability to transform your appearance. When I first got cast in The Virtues I had very long, natural blonde hair. Shane asked if I was game for shaving my head [for the role]. Since then I’ve embraced transforming myself physically for different roles. I’ve also worked with incredible photographers like Charlie Gray, Greg Williams, and Rankin, who encourage you to embrace a character for a photo shoot.

Q: Is fashion something you’re into?

"I love fashion. I work with an incredible stylist, Holly White, who has introduced me to designers like Marco de Vincenzo."

Q: Is there anyone you’d like to work with next?

"I would love to work with (We Need To Talk About Kevin director) Lynne Ramsay. I admire her films and style of directing. I think Kathryn Bigelow’s (Hurt Locker) and Lenny Abrahamson’s (Room) films are very special. I’d love to work with Charlize Theron; Monster is one of my favourite films and her performance is remarkable."

Q: How was working on Ridley Scott’s upcoming sci-fi series, Raised by Wolves?

"Working with him on a genre that he basically gave birth to is surreal. He loves actors and he’s always open to suggestions but has a very clear picture of how he wants it to go."

Q: What’s coming up next?

"Right now, I’m working with Guy Richie on his latest feature film and I’ve really enjoyed being back in London. Calm With Horses, which I shot in Ireland last year, will be arriving on Netflix on October 26. I’ve very proud of the film and I’m looking forward to the audience response."

On October 26 – that's THIS Bank Holiday Monday – Netflix will add the excellent Irish thriller Calm With Horses to its streaming service. Watch the trailer below for this must-watch movie...

READ: Meet Victoria Johnston, The Grammy-Nominated Dubliner Who Has Been Called "The Next Enya"