Noeline Blackwell On Hope, Sex Ed Deniers And Why It's Important To Keep Shouting

"It's not enough to say 'I want them to grow up innocent'". 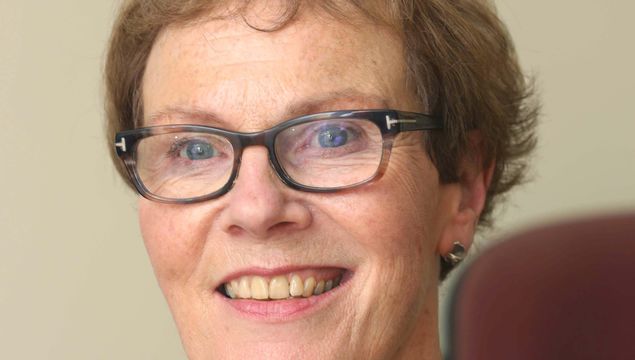 Noeline Blackwell is a human rights lawyer and Chief Executive of the Dublin Rape Crisis Centre (DRCC), a group which "arose out of concern".

Founded by a group of women – motivated by the 1977 Women's Liberation Movement and subsequent Reclaim The Night marches – its original aim was for women of all ages "to be able to walk where they wanted and dress how they liked."

The DRCC aims to prevent the harm and heal the trauma of rape and sexual abuse by providing crisis counselling and long-term therapy to adult women and men who have experienced rape, sexual assault and childhood sexual abuse.

It will celebrate its 40th anniversary this year with Blackwell at the helm.

Her tenure has seen the organisation grow from strength to strength at a time when sexual assault cases are making world news rather than remaining caged in anonymity.

Although her influence is strong, her modesty is aware of the legacy that came before her.

It's that historical impetus that discourages Blackwell from holding out hope for a post #MeToo revolution which would see non-consensual sex eradicated and full victim support encouraged.

"I am and I'm also not hopeful for the future," she says, wryly.

"While, yes Ireland has moved mountains post #MeToo and the rugby rape trial, we have seen this come and go before. Where did that momentum go? I think this is a really good window of opportunity of momentum, but my concern is that something will close it.

"We have to have the conversations about consent – and they are difficult conversations to have. My hope is that we can create an open door where topics like this can continue to be discussed, but we have to keep talking in order to do so."

#AskConsent Sex without consent is rape - The cause of rape = Rapists. If you or someone you know has been affected by sexual violence please remember our National 24-Hour Helpline 1800 77 8888. https://t.co/hh79RJYp6Y

In order to continue that conversational flow, Blackwell's strategy is threefold:

“It is clear that there is much work to do at a societal level around preventing sexual violence and understanding consent in Irish society. Now more than ever, we cannot go backwards - we must show survivors of abuse and sexual assault that we believe them, that we will support them and that we will work to prevent the harm in the first place."

"Don't we want our children to have respect for themselves and others throughout their lives?" she asks referring to the gaping lack of concern regarding sexual health in this country.

As it stands, certain elements of the Relationships and Sexuality Education (RSE) curriculum currently being taught in schools is understood to be some 20 years old.

It offers no education on safe internet use, LGBTQ+ matters and what is taught is largely up to a legal obligation to stay within the ethos of the school.

The Provision of Objective Sexual Education Bill, fronted by TDs Paul Murphy, Bríd Smyth and Ruth Coppinger passed the second parliamentary stage in April 2018 and has, ever since, been blocked from reaching the Dáil stage.

"We need a better understanding of consent from an early age. You can teach a three-year-old how to have respect for themselves or others. We are failing our young people by not educating them in a manner that is appropriate.

"We don't want our children obtaining incorrect information from the internet. We need to give children an idea of what consent looks like," she continues.

"It's simply not enough to say 'I want them to grow up innocent'."

*TW Two years on from #MeToo Survivors talk about coming forward about sexual assault & what comes after. If you or someone you know has been affected by sexual violence please remember our National 24-Hour Helpline 1800 77 8888. https://t.co/YD7qMJVhYv

However, despite the encouraging rise in rape discussion that was previously and considerably enshrouded, the dishearteningly low rate of prison sentences for repeat offenders has left abused women wondering if the deeply disturbing process is even worth it.

"The most disconcerting aspect of it all is that the victim generally carries the burden his or herself, it's deeply disturbing," Blackwell says.

"What I would say to these people is that they must recognise that sexual abuse or rape is intrinsically harmful and that they need to get help for oneself first and foremost.

"Secondly, they are not responsible and have nothing to be ashamed of.

"There are categories of victims in need we deal with – sex workers, girls in provocative clothing or those who have hit a level of intoxication – who members of society still deem as those who are Asking For It – but it's just one of those excuses that should never be uttered.

"Even in familial instances of abuse, you'll find abusers insisting that this was the case.

"Early reports of rape were done so anonymously because you simply couldn't speak about it. We desperately want to build a coalition of interest and continue to support and protect survivors in a world where victims are finally been listened to."

If you wish to donate to help DRCC continue their work, you can do so here.

For support and information related to rape and sexual violence, please ring the DRCC's National 24-Hour Helpline can be reached at 1800 77 8888.

READ MORE: Dakota Johnson’s Podcast Is Listening To The Victims Of Sexual Assault