Stealthing: The Dangerous Sexual Assault Tactic Tackled In 'I May Destroy You'

“Stealthing” is the pop culture name to describe a “new sex trend” reported as being on the rise. 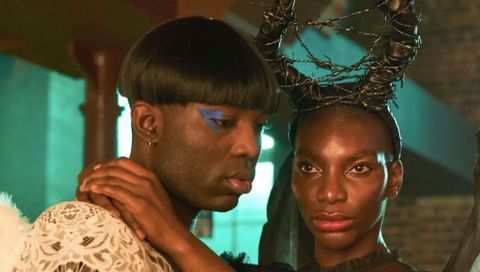 The language around sex is changing.

While this can be viewed as a good thing, we have now become acutely aware of sexual methods we previously didn't know existed.

One example of this is 'stealthing' – the act of non-consensual condom removal during intercourse. In basic terms, it’s when a male partner removes or purposely damages the condom during sex without their partner’s clear consent.

The practise came to light in a 2017 report by Alexandra Brodsky for the Columbia Journal of Gender and Law, in which Brodsky imagined what legal recourse stealthing victims might have, deeming the nonconsensual interaction “rape-adjacent.”

Her study finds survivors of stealthing struggling to recognise their experience as sexual assault.

It's both affirming and terrible to write about an under-acknowledged form of gender violence and hear a chorus of "me, too" in response

As of yet, very few stealthing victims have had their attacker prosecuted (that number is, however, growing) although bills have been put forth to consider stealthing sexual assault in the US and Australia, with the practice considered "a very serious offence" in Ireland, according to Clíona Saidléar of Rape Crisis Network Ireland.

Following a landmark case in Switzerland where a man was given a 12-month suspended sentence for removing a condom without his partner’s knowledge or consent, the insidious nature has garnered attention. But, despite this, no one has so far been found guilty of it in Ireland or the UK.

"It would be defined as an assault under Irish law,"Saidléar says.

"It’s a very serious offence and people should know that if they think it’s just a bit rude but that it’s innocuous, no – it’s actually a crime in Ireland. It can be tied up with the notion of consent, or when consent is assumed.

"It can also be a part of the abuse, where they go 'no, I'm not wearing that', that overt refusal to wear a condom."

As well as that, stealthing is also exceptionally dangerous. Purposefully and secretly removing or damaging a condom opens up both partners to the risk of contracting sexually transmitted infections.

For women, stealthing can lead to unwanted pregnancies. There’s also the violation of trust, autonomy, and dignity, which could have a long-term psychological impact.

The abusive method was recently showcased publicly in Michaela Coel's explosive series 'I May Destroy You'.

Coel's protagonist (Arabella) becomes a stealth victim when the person she chooses to sleep with after her assault (Zain) removes the condom without her knowing.

When Arabella finds out, Zain's responds dismissively by saying “I thought you could feel it”, “I thought you knew”, “the condom was uncomfortable”. However, it’s not until Arabella enquires about the situation with a detective that she realises that the practice is rape.

The series shines a light on the importance of a thorough sexual education, given that the subsequent reception to that episode was one of shock and curiosity.

The deceptive and coercive nature of stealthing make it inherently difficult to avoid. But there are a few things that can decrease your risk of being a victim. First and foremost, prior to any sexual encounter, be sure to express your boundaries. Make it clear that you’re only saying “yes” to sex with a condom.

Other suggestions range from bringing your own condoms to ensure that they aren't damaged, using condoms that you can feel (i.e. ones that are ribbed), and asking your partner to ejaculate outside of your body (yes, even with a condom on).

In cases where sex began as consensual, such as with stealthing, the conviction rate is increasingly difficult. However, if you have been a victim of sexual abuse, the most important thing to remember is that it’s not your fault, it is assault.

If you or someone you know has suffered at the hands of sexual violence, there is help available: