11 Irish Creatives You Can Support This Black History Month

To kickstart Black History Month, Irish Tatler wanted to highlight some of the Black excellence we boast on this side of the world. 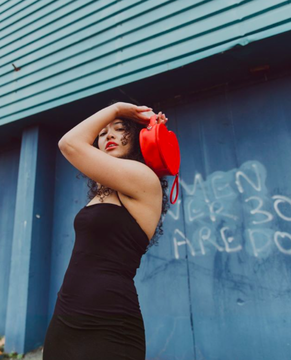 Ranging from poets to academics to photography – these are the names you should be looking out for in future.

Emma Dabiri is an author TV presenter, PhD researcher at Goldsmiths, and teaching fellow in the Africa department at SOAS. She has published in a number of academic journals, as well as the national press, and is one of the BBC's Expert Voices.

Her book Don't Touch My Hair is a gleaming, intellectual investigation into black women and the very serious business of their hair, as it pertains to race, gender, social codes, tradition, culture, cosmology, maths, politics, philosophy and history, and also the role of hairstyles in pre-colonial Africa.

   Due to ticket demand, Don’t Touch My Hair @wowglobal 2020 has moved to a bigger hall at the Southbank. For all those asking me about tickets, there are now MORE MORE MORE available! To all those with existing tickets you should have received an email about the change of venue! Can’t wait to see you all . Link in stories 

Vanessa Ifiedora is a skilled photographer living in Northern Ireland whose book Off-White Sheets is as hauntingly beautiful as it is wildly impressive. Aside from wedding work, she has also photographed a number of prominent people and organisations for newspapers and magazines. Check out her website here.

Last night I was talking about the things I daydream about doing with my future daughters and this man starts heavy breathing through his forehead. My daughters and I will drive him to madness. And isn’t that what life is all about really.

Pints of Malt is an excellent podcast in which 'four Nigerian/Irish lads share their experiences growing up and living in Ireland.' The podcast is full of laughs from the get-go and covers a range of topical issues such as The Rise of The Karen and day-to-day racism. Follow them here.

Happy Independence Day to all Nigerians  ⠀⠀⠀⠀⠀⠀⠀⠀⠀⠀⠀⠀ We’ve dedicated tomorrow’s episode to the occasion so keep an eye out! But for now enjoy the day and have a pint of malt on us!!  #nigeria #independenceday

Zithelo Bobby Mthombeni is a Dublin-based filmmaker and photographer who directed 'This Land', a new documentary about race, immigration and Irishness which is featured on YouTube.

'This Land' explores cultural identity in Ireland, by way of portraying new and necessary ways of experiencing Irishness. It also follows the impact racism can have on a person's sense of identity.

It also explores the impact of racism and Direct Provision on the outlook of the people interviewed. More on the piece here.

Born Samantha Kay in London to Congolese parents, Soulé grew up in Balbriggan and is now considered the leading force in a new wave of emerging Irish music.

The Dublin based electronic pop artist has become famous for her way of matching bass-heavy sound and soft, soulful vocals.

Fronted by Matt O’Baoill and Max Zanga, Tebi Rex is made up of two young Maynooth men who have been building an impressive repertoire at the forefront of Ireland's hip-hop uprising of late. Their songs are as infectious as they are important, with songs like Black Enough spreading a message as well as getting people to dance.

P I C N I C ⛺️ One of our favourite stages we have ever played. Pretty sure these tasty snaps were courtesy of @nicholasodonnell 

Erica Cody is a Dublin-based singer-songwriter who began singing at three and writing lyrics at seven years of age. She's been hailed as a 'throwback artist' with her debut EP 'Leoness' being linked back to likes of 'Aphrodisiac' by Brandy.

In 2019/2020 she's gone from strength to strength, setting the gold standard for Irish R'n'B artists as well as honed songwriters internationally.

Excited to performing for the launch of this amazing collaboration of @roland_mouret x @dragana23 this Friday. Who wants to hear some of that new new 殺 #RHAX2019 @rhagallery : @georgevoronov

Melatu Uche Okorie is a writer and scholar. Born in Nigeria, she moved to Ireland in 2006. It was during her eight and a half years living in the direct provision system that she began to write. She has an M. Phil. in Creative Writing from Trinity College, Dublin, and has had works published in numerous anthologies.

Her first book This Hostel Life tells the stories of migrant women in a hidden Ireland. From a day in the life of women queuing for basic supplies in an Irish direct provision hostel to a young black woman’s depiction of everyday racism in Ireland, her nuanced take shines a light on the injustice of the direct provision system and on the insidious racism experienced by migrant women living in Ireland.

'Direct Provision is like being in an abusive relationship' #Nigerian writer Melatu-Uche Okorie is the first author to come out of Ireland’s dehumanizing system for asylum seekers. Her book, titled ‘This Hostel Life’, was published recently by @skeinpress and she is currently a PHD candidate at Trinity College. We’re so happy that Melatu is one of our guests for #TellMeAStory on the last day of #OurTableRefugeeWeek!{Sunday at 4:30 pm @christchurchdublin } #ThisHostelLife will be available for sale. #EndDirectProvision #Proud #FoodIsCulture #MelatuUcheOkorie

Slight Motif is an urban organisation based in Ireland with the sole intention of growing with, branding and supporting urban talent in the country. Their website is a refreshing space within a saturated market that covers fresh, new and interesting events, artists and creatives in Ireland who deserve to be celebrated.

Mona-Lxsa is a successful DJ who has progressed steadily in the music scene Ireland, playing several times at both Longitude and Electric Picnic. After finding trouble breaking into the Irish music scene, the impressive then-26-year-old took it upon herself to launch GXRL CODE, a collective of Irish creatives who provide a platform for all women across a number of industries.

Having recently gripped the hearts of the nation by way of The Late Late Show with her eloquence and soft-spoken grace, Limerick-born Denise Chaila is poet, rapper, philosopher and feminist all in one.

Her debut EP, Duel Citizenship (the misspelling is deliberate – a testament to her unapologetic and combative spirit), was hugely well-received by critics which, in turn, opened many previously-closed doors. A deep thinker, articulate wordsmith and endearing presence, Chaila has most certainly changed the game for Irish women's rap – and it appears that she's only getting started.

I have been waiting to say this for AGES!⁣⁣ ⁣⁣ It’s my pleasure to finally (finally!!) announce that my mixtape, Go Bravely, will be dropping on October 2nd.⁣⁣ ⁣⁣ Its been a decade of a year. In the last few months I’ve been very grateful for the name we gave my first full offering that one day ages ago in @murlibo’s house. It has been a necessary reminder that we don’t have to go with all the answers, or go fully prepared, or go without fear. Sometimes we just... hold ourselves, and go bravely. So here’s a BUNCH of songs, weeks of recording with my closest friends and my whole heart. ⁣⁣Today I just keep remembering walking around campus with my headphones in, wondering when exactly (if ever) music would be a thing for me. Somewhere in the world I’m sitting at the kitchen table with my dad, really grateful. ⁣⁣ If you’re reading this, I hope you find a tenner in the back pocket of some jeans you rarely wear today. ⁣⁣ ⁣⁣ D x⁣ ⁣ ⁣ Art & Photography by @mmarklogan 