How To Honour Our Trans Sisters This International Women's Day 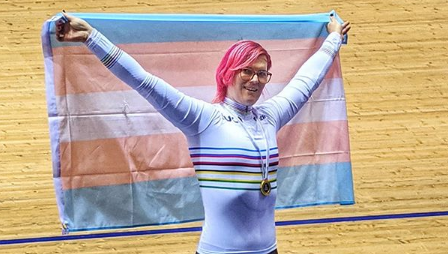 This includes poor women, rich women, women of colour, fat women, disabled women, trans-women and every other woman under the sun — you are valid, loved, and appreciated.

Trans-women existing in society today is seen as a direct act of rebellion in a cookie-cutter society that refuses to acknowledge their presence.

Bravery embodied, these people fight for the basic rights and freedoms to which all humans are entitled; to life, liberty, freedom of expression, the pursuit of happiness and equality before the law.

However, that is not always the case.

While simply presenting oneself in a way in which one feels comfortable is rarely meant to purposefully offend, a number of onlookers shun those for doing so, perpetuating a narrative of women equating to their genitalia instead of exploring and normalising the different ways women can – and do – exist.

READ: The Woman Whose Experience With Trolling Has Driven Her Offline

To this day, trans-women continue fighting for their right to take up space in society, despite heterosexuality being a relatively young concept itself.

What does transgender mean?

Gender identity refers to a person’s internal sense of being male, female or something else; gender expression refers to the way a person communicates gender identity to others through behaviour, clothing, hairstyles, voice or body characteristics.

What are the legal implications of being transgender?

Ireland is one of just six jurisdictions in the world where people may legally change gender through self-determination.

The 2015 Gender Recognition Act provides an administrative process for transgender people over 18 to achieve full legal recognition of their preferred gender. The process is also open to people aged 16-18, though they have to go through the Circuit Court and get a doctor’s certificate and parental consent.

The historic move was a vital one for transgender people in this country.

It meant they could change their gender on birth certs, passports and driving licences by making a formal legal declaration, without the need for testimony from psychiatrists.

This followed the battle of Irish transgender woman Lydia Foy, who spent 20 years of her life involved in difficult and complex litigation to have her gender legally recognised in the Irish State, the Oireachtas passed the Gender Recognition Act in 2015.

READ: Why The Concept Of Gender Is Becoming Outdated

How can we help?

TENI does trojan work for the trans community in Ireland, including the provision of over 170 training sessions each year, educating almost 7,000 people on topics such as health and wellbeing, employment and education.

The team boasts a wealth of knowledge between their combined members of staff and workshop teachers. Their website is full of helpful information and ways in which you could get knowledgable, donate money or even volunteer your time.

Another group to focus your attention on to is BeLonG To.

It's #InternationalWomensDay Lets continue to advocate for the equality of all women, not just those who experience the same barriers as we do. Gender is ever expanding & does not only apply to just cisgender women, but to women of all gender identities & expressions #IWD19 pic.twitter.com/GeFnPwiK50

Like many others of its ilk, BeLonG To relies on the support of donors, fundraisers and volunteers to ensure that their vital LGBTI+ youth service remains open.

"Growing up LGBTI+ can have harrowing effects on the mental health of our young people when they are not accepted," their website reads. "Unfortunately, LGBTI+ youth are three times more likely to attempt suicide, and two times more likely to self-harm than their counterparts."

However, choosing to support BeLonG To, through hosting an event, joining their team of volunteers, or making a donation would seriously help.

Supporting couldn't be easier. Find out about how to do that here.

This International Women's Day, let's learn from the people who went before us and never shun others to the background again.

READ MORE: Being Transgender In Ireland – An Explainer For Those Who Were Too Afraid To Ask

READ MORE: Not Done Yet: What Irish Women Are Still Fighting For This International Women’s Day