So, The Internet Taught Me This Today: The Definition Of Stan 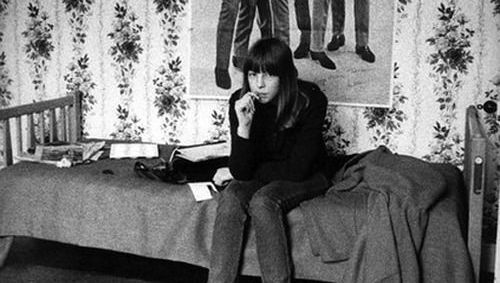 Apparently, I've been living under a rock for the past few years as only today did I come across the word 'Stan'. Digesting last night's Love Island with the rest of the Irish Tatler team, one writer - who shall remain nameless - mentioned that she was "such an Ovie stan". I sat there, quiet and confused as my brain quickly tried to assess whether or not she was being nice about my dear Ovie. It wasn't until the rest of my colleagues began to express their love for the coolest Love Island contestant in history that I realised 'stan' was a positive word.

But is it a verb? a noun? an adjective? Embarassed by my lack of knowledge, I quickly opened up a new browser and searched; 'what doe stan mean?", "why is my colleague 'stanning' Ovie from Love Island?", "Why does it sound so pervy?", Why do my related searches involve references to fanfiction involving Harry and Louis from One Direction in a deeply loving relationship?" Questions upon questions, and no answers in sight. 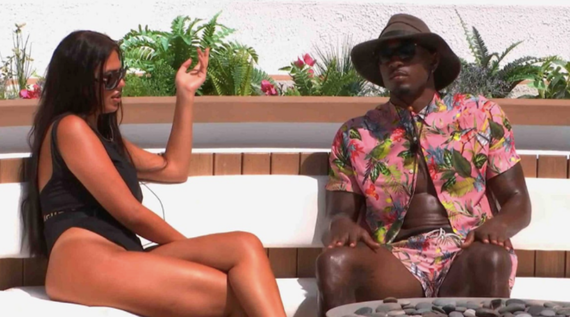 Prior to this, the only time I had ever come across the word "stan" was as a nickname for the name "Stanley". How asleep I've been.

According to Urban Dictionary, "stan" is a portmanteau of the words "stalker" and "fan," and refers to someone who is overly obsessed with a celebrity. Pretty straightforward, right? "Stan" is no "on fleek" and for that I am grateful. 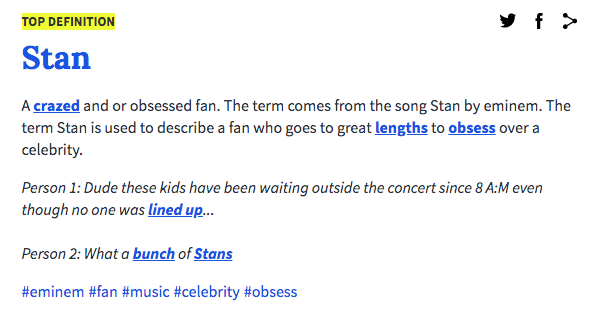 In addition to being easy to use, "stan" comes in handy all the time. A whole new world of (incorrectly) accusing people in my life of having more of an obsessive personality disorder than I has opened right up: "Ugh, Ma, you're such a stan for Charlotte Tilbury lipsticks!" "Ugh, Dad, stop stanning for Bruce Springsteen already!"

Where Does Stan Come From?

If, like me, you're eagle-eyed - you may have noticed that under Urban Dictionary's definition of "stan" there's a hashtag for Eminem. Why?

Well, in this case, you can thank Eminem (a sentence I never thought I'd write). In 2000, the rapper released "Stan" as the third single off his award-winning album The Marshall Mathers LP. The song, about an obsessive fan named Stan who kills his pregnant girlfriend and then himself after Eminem refuses to answer his letters, topped the charts in Australia and the UK; it didn't do too badly here in Ireland either.

Soon after, "Stan" began being used to describe people who go above and beyond the average loyalty of most fans.

So Is Stan A Compliment, Or?

Well, in typical Internet-age form, "stan" has gone through so many iterations and usages that it no longer holds the connotation of an abusive, letter-writing murderer, so that's good. Depending on who you're talking to, "stan" can have sinister, pathetic, or just obsessive undertones.

Similarly, it tends to be used in the same hyperbolic, slightly ironic way that a whole lot of slang is used nowadays. So when I say, for example, that I am a Harry Styles stan, I do not mean that I am sending him locks of my hair or killing people in his honour and leaving their fingers on his doorstep. I just think he's the prettiest, most stylish and talented man I've ever seen and have a Pinterest board dedicated to our wedding - like it's really not even a big deal so relax.

...No, seriously, relax; what I'm saying is that people tend to self-identify as stans. It just means that you like something or someone a whole lot.

As soon as I plucked up the courage to ask the writer in question what she meant by "stan", I felt as though I'd been living under a rock for the past ten years - and apparently, I have been.

However, it seems that I can blame my lack of knowledge on specific fandoms, like K-Pop circles, who have been tucking away the slang for years. As social media platforms increasingly cross-pollinate, niche slang words like these are blowing up left and right - including Harry Styles stan pages. Followed.

How Do I UsE IT IN A SENTENCE?

All kinds of ways, friends! That's the beauty of it.

You use it as an adjective...

me: saw this rly funny thing on stan twitter
friend: oh what’s your @
me: pic.twitter.com/VIgqIvWfiH

So there you have it: Everything you could possibly want to know about this strange and mysterious slang word. Go forth and stan, my friends - stan wisely, and stan well.

READ: So, The Internet Taught Me This Today: Sex Hormones

READ MORE: What Does The Same-Sex Marriage Vote Mean For NI?