A Love Letter To Yoga, From Annie and Lee 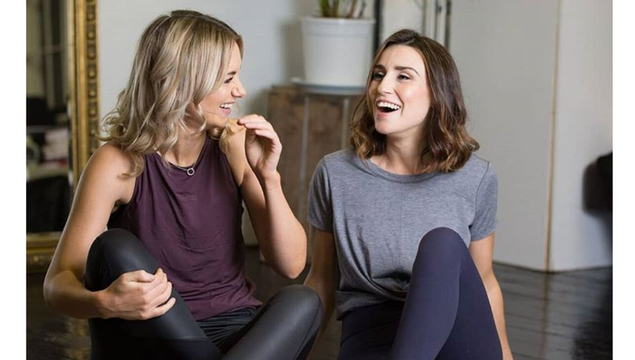 To celebrate International Yoga Day, we spoke to two women whose lives have been changed by Yoga and how, through the practice, their paths have been woven together.

Annie Kirwan and Lee Tracey are the co-founders of Reformation, a boutique studio in the heart of Ballsbridge. They each met on a yoga mat, but their individual journeys started way before that point and for different reasons too.

Here are their stories...

Who knows where I would be without Yoga. Now, I know this sounds like a dramatic statement but its completely justified! I turned to Yoga when I needed to get back on the right path.

My choices in life had led me down a pretty normal avenue as society would view it, with boxes ticked and everything going in seemingly the right direction. But I felt stuck and kept questioning everything mostly why did I feel so miserable?

Nothing was ‘wrong’ in my life as such, but it felt wrong. Through the practice of Yoga, I saw the truth - that I was trying to fit myself into a life that I thought was expected of me rather than a life that I truly wanted to live.

So I decided to change. Everything.

I quit my job, moved from my home and ended a long-term relationship.

I took a chance and made the decision to retrain in something that had helped me to bring so much clarity into my life and that had become such a profound catalyst for change in my life. Yoga.

Six years on, my life is unrecognisable in every sense and I have the absolute privilege of sharing these life-changing practices with people all over the world. Annie and I have co-founded Reformation, a studio we created with the intention of connecting people to themselves and their community every day and we are so excited to bring the best teachers together in a beautiful inclusive and empowering space.

Yoga has been the biggest gift I have ever given myself. The word yoga translates to means union or connection and before I started practising Yoga, it is very safe to say I was very unconnected.

From the outside I was killing it, life was great! But the reality was I wasn’t that happy and I was addicted; addicted to being busy, addicted to making lists, addicted to my body image and addicted to perfection. I was literally always on the go. They mightn’t seem like the worst things ever, but my mind and body were exhausted, the life I was living was just unsustainable.

Practising Yoga was the first time I had ever really sat still and asked myself how I was. Yoga is like holding a mirror up to yourself and not only asking yourself the hard questions but listening to the hard answers. A time to listen to what your body is usually screaming, but you are too busy to hear.

My yoga journey has really been one of self-care and self-love. It has been a slowing down and an appreciation of all the little things around me rather than always chasing something new. This has been so life changing.

It has made me so much positive, so much more grateful, so much more at ease. It's made me connect with and appreciate my body - it's pretty hard not to when you are in splits or upsidedown in a headstand!

In such a fast past world where we are constantly bombarded with information and influence, we need Yoga in our lives more than ever. The modern world needs this ancient practice and that's exactly why we opened Reformation. It's been so magical to watch people come into the space and watch them transform in front of our eyes.

To celebrate #InternationalYogaDay, Annie and Lee and opening the doors of their beautiful Reformation studio and inviting everyone to come and practice - all classes from morning to night are free.