Joy in the Journey: 3 Stories of Change with Zalando

The IG Live series goes to prove that while change is tough, we're tougher!
In Partnership with Zalando 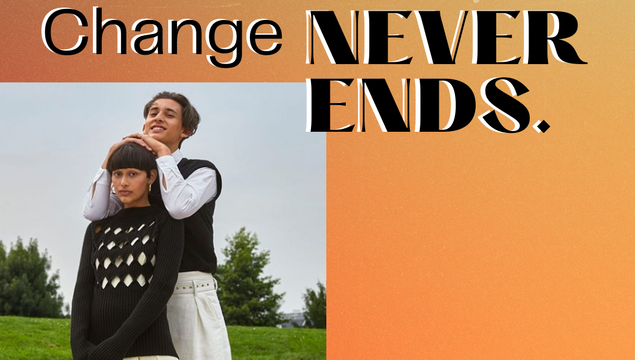 With change comes metamorphic power and together with Zalando, we're celebrating those who have grown and reinvented themselves with the aim of inspiring others to add a new chapter to their own stories.

Last month, Irish Tatler partnered with Zalando on a series of Instagram Lives to celebrate the brand's Autumn-Winter '20 #ChangeNeverEnds campaign.

When developing the concept behind the campaign, Zalando felt it was impossible to centre it around anything but the upheaval and change that has wholly consumed this year and it became really important to the brand to put their customers’ real-life stories and experience at the centre, using fashion in a supplementary way to help illustrate.

As part of the campaign, Zalando invited its community of customers to submit their own personal stories of change via Instagram Feed, Stories or Reels, using the hashtag #ChangeNeverEnds and with the aim of inspiring others.

Of the real-life stories submitted by customers, a selection was then selected to go through a screenwriting process and be portrayed as short films, to be used as part of the global campaign across Zalando's social media.

Watch the video below for a glimpse at some of the stories they scripted and filmed.

To echo the #ChangeNeverEnds campaign's sentiment that reinvention is not a one-time event but something that should happen at many of life's turns, Deputy Editor of Irish Tatler, Amy Heffernan spoke to three Irish women who've embraced all of the uncertainty that this year has brought and even managed to harness it to become a positive influence.

First up was fitness instructor, actress, artist and all-round multi-hyphenate, Dee Fitzpatrick. We spoke to Dee on the day that the second country-wide lockdown was introduced, so it's fair to say that people were in need of a little inspiration. And that's what Dee delivered.

She told us that finding time in lockdown to get creative again has been her saving grace and that she's been channelling her extra energy into teaching herself to play the guitar and writing songs. While little about 2020 has been typical, Dee said that she's probably grown more in the last year than she has in her previous twenty-nine and according to her, that's all down to having more time to self-reflect and explore her passions.

On days when she's been feeling unmotivated or a bit lost, she has tried living by a mantra that says 'If you don't know where you're going, any road is going to take you there' and to those listening who might want to use lockdown to do something outside of their comfort zones, Dee advised to "Just stop waiting! Now is the time, your time. Stop waiting your life away."

Watch our #ChangeNeverEnds chat with Dee below.

Next, we chatted to fashion stylist turned the creative genius behind The Positive Space, Corina Gaffey about how buried underneath our mental to-do lists are bits of brilliance we never knew were there.

Similarly to Dee, experimenting in other creative mediums, such as photography, helped Corina navigate days when her typically busy schedule came to a standstill with the restrictions. She spoke of the merits of establishing a WHF routine; getting dressed, putting on makeup, walking her dog, Teddy and the latter, in fact, was what gave birth to The Positive Space idea. Motivated by loneliness she felt for Dublin city, Corina roped in her husband Anthony and sister Naomi to create a public exhibition in over 500 sites across Dublin, filling up negative, blank signage with photographs from some of Ireland’s best.

Coming back to her area expertise – fashion, Corina talked about the challenges facing the industry on the other side of the pandemic, how the days of excessive seasonal collections and elitist fashion weeks are quite likey past us. What keeps her hopeful though is the thought that COVID-19 has created the perfect storm for change within the fashion industry.

Watch our #ChangeNeverEnds chat with Corina below.

For the final instalment of the series, we chatted with DJ and sustainability advocate, Tara Stewart about how – despite all of the uncertainty this year – she now has a clearer idea of who she is and wants to continue being on the other side of this pandemic.

Having her hectic work schedule essentially wiped overnight could have sent Tara into a state of panic, but instead, she told us of how establishing an exercise routine in lockdown – something her life has been missing for some time – saved her. She told us how a healthy mix of running, sea swimming and meditation has been really helpful to her mindset, as well as setting up a home sewing station to allow her creative juices to flow.

On a broader scale, we discussed the BLM movement, its impact in Ireland and how we can't afford to allow its momentum to dip next year. From there, Tara told us about a foray in fast fashion (and watching The True Cost) had actually given rise to her sustainability journey and became one of the main pillars of her podcast, Dirty Laundry. To those watching who find the world of zero-waste overwhelming, Tara's advice was simple, "Start small and slowly," she said. "Don't beat yourself up about it! Do whatever you can do and introduce sustainability into your life gradually."

Watch our #ChangeNeverEnds chat with Tara below.

Read More: How Zalando Is Putting The 'Able' In 'Sustainable'