After a Republican congressman referred to Representative Alexandria Ocasio-Cortez using a sexist vulgarity, the youngest ever Congresswoman took to the House floor to denounce the abuse faced by women in every day life. 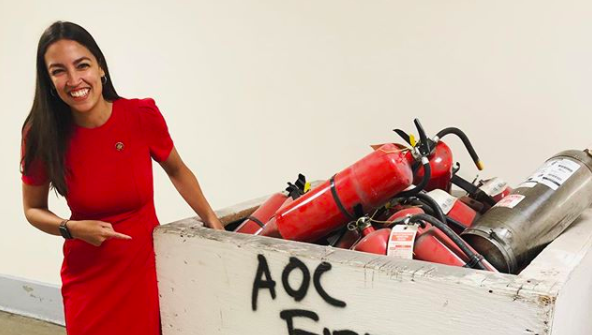 "I am here because I have to show my parents that I am their daughter and that they did not raise me to accept abuse from men."

US Congresswoman Alexandria Ocasio-Cortez (AOC) has received commendations for her decency and decorum this week following a rousing speech rejecting a colleague's apology after he allegedly used a sexist slur in an argument.

The New York City Democrat took to the House floor on Thursday night to accuse Republican Ted Yoho of accosting her on the steps of the US Capitol on Monday.

Ocasio-Cortez, who has been the recurrent target of conservatives since she assumed office in January 2019, said the words showed a "pattern" of bad behaviour by men.

The congresswoman said she told Yoho his comments were rude and walked away to cast her vote. Then, as first reported by The Hill, Yoho was overheard using a vulgar insult often aimed at women.

"There were reporters in the front of the Capitol, and in front of reporters Rep. Yoho called me, and I quote, a 'f*****g bitch,' " she said.

Yoho has since denied saying the slur and has called for civility.

AOC responded by saying that she was prepared to let the incident slide until Yoho "made excuses" by citing his wife and daughters in a speech on Wednesday.

"I will commit to each of you that I will conduct myself from a place of passion and understanding that policy and political disagreement be vigorously debated with the knowledge that we approach the problems facing our nation with the betterment of the country in mind and the people we serve," Mr Yoho told his colleagues.

"I cannot apologise for my passion or for loving my God, my family and my country," he added.

Ocasio-Cortez responded to Yoho's excuses by way of a passionate speech on Thursday, citing the cultural tendencies which make allowances for women to be judged by men.

"I want to be clear that representative Yoho's comments were not deeply hurtful or piercing to me," she added.

"Because I have worked a working-class job. I have waited tables and I have ridden the subway. I have walked the streets in New York City. And this kind of language is not new.

"I have encountered words uttered by Mr Yoho and men uttering the same words as Mr Yoho while I was being harassed in restaurants. I have tossed men out of bars that have used language like Mr Yoho's."

"This issue is not about one incident. It is cultural," she said, calling it a culture "of accepting violence and violent language against women, an entire structure of power that supports that".

"Mr Yoho mentioned that he has a wife and two daughters," Ocasio-Cortez continued.

"I am two years younger than Mr Yoho's youngest daughter. I am someone's daughter too. My father, thankfully, is not alive to see how Mr Yoho treated his daughter."

"I am here because I have to show my parents that I am their daughter and that they did not raise me to accept abuse from men," she continued.

"When you do that to any woman, what Mr Yoho did was give permission to other men to do that to his daughters," she added.

"In using that language, in front of the press, he gave permission to use that language against his wife, his daughters, women in his community, and I am here to stand up to say that is not acceptable."

The ten-minute video has since gone viral, with a number of celebrities and politicians commending Ocasio-Cortez for her unrelenting grace and principled defiance – something a number of women who have gone before her have experienced and subsequently commented on.

Sexism permeates our culture—and members of Congress are not immune.

Thank you @AOC for that powerful speech and for speaking out about abusive behavior that women and girls across our country endure every day. We cannot be silent. https://t.co/w50EzkYE6M

Democratic Speaker of the House Nancy Pelosi – the top Democrat in the chamber – called the alleged slur "a manifestation of attitude in our society really".

"I personally have experienced a lifetime of insults, racism and sexism," California Congresswoman Barbara Lee said on the House floor. "And believe me, this did not stop after being elected to public office."