The Amazon Rainforest Is On Fire – Here's How You Can Help

The Amazon rainforest has been burning for over three weeks – here’s all the ways you can stop this from happening in the future. 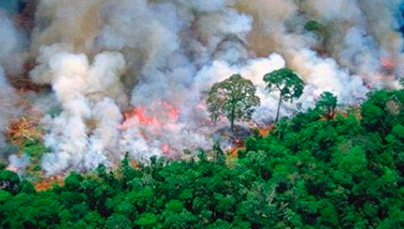 Officials say the Amazon rainforest is burning at a record rate.

Earlier this month, Brazil declared a state of emergency over the rising number of fires in the region. So far this year, almost 73,000 fires have been detected by Brazil's space research centre, INPE.

What caused the fires?

While the Amazon is typically wet and humid, July and August – the onset of the dry season – are the area's driest months, with "activity" peaking by early September and stopping by mid-November, according to NASA.

The fires are largely linked to people clearing out the land for farming or ranching.

There was worldwide outcry when the Notre Dame cathedral was on fire. Why is there not the same level of outrage for the fires destroying the #AmazonRainforest? pic.twitter.com/VbSda5PYAK

How big is it?

You can see the smoke from space. The European Union Earth Observation Program's Sentinel satellites captured images of "significant amounts of smoke" over Amazonas, Rondonia and other areas.

The skies darkened over San Paulo, Brazil, for an hour Monday afternoon after winds carried smoke from about 1,700 miles away.

Trending today: What Is Climate Anxiety + How To Go About Soothing It

How does this affect us?

The Amazon is referred to as "the lungs of the planet" and plays a major role in regulating the climate. It generates more than 20% of the world's oxygen and 10% of the world's known biodiversity. The world would drastically change if the rainforest were to disappear, impacting everything from farming to the water we drink.

How can we help?

In a number of ways.

1. Protect an acre of the rainforest through Rainforest Action Network's program

The more you learn about the crisis that’s happening, the more you can help.

The fires are a direct result of soaring deforestation rates to clear or prepare land for agriculture and cattle farming. According to WWF, there has been a massive increase in the number of fires in 2019, and half of these have been in the last 20 days.

While natural wildfires are not unusual at this time of the year, the sheer scale and intensity of these fires is exceptional, and the direct result of increases in deforestation rates by farmers going largely unchecked by Brazillian government.

3. Think about the things you eat

The food we eat shouldn’t cost the Earth – but it often does. Food production is the leading cause of deforestation. Forests are being cleared to rear livestock (for meat and dairy) and to grow crops to feed the increasing livestock populations.

5. Reduce your paper and wood consumption

Double-check with Rainforest Alliance that what you're buying is rainforest-safe. You can also purchase rainforest safe products from the alliance's site.

Ecosia.org is a search engine that plants a tree for every 45 searches you run.

A lawyer in Rio Branco has accumulated over 77,000 of his 150,000 signature goal to mobilise an investigation into the Amazonian fires.

8. Donate to the Amazon Conservation Team

They work to fight climate change, protect the Amazon and empower indigenous peoples as well as listing exactly what your money goes toward. You can help plant trees, sponsor education, protect habitats, buy a solar panel, preserve indigenous lands and more.