Amy Coney Barrett: Who Is Trump's Supreme Court Nominee And What Does She Stand For?

Judge Amy Coney Barrett, a devout Catholic favoured pick of conservatives, has long been atop President Donald Trump's Supreme Court shortlist. Here's what you need to know about her. 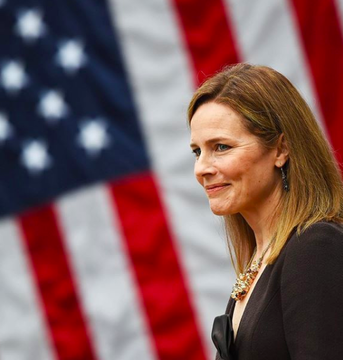 A noted liberal icon, the world mourned the passing of 87-year-old Justice Ginsburg on September 18, only to shortly be made aware of her dying wish: that she would not be replaced until a new president is installed.

It looks like her 'most fervent wish' will not be upheld, however, as just days after her death, Senate Majority Leader Mitch McConnell announced in a statement that whoever Trump nominates to replace her will receive a vote on the Senate floor.

President Trump – who, as sitting president, gets to select nominees – reportedly once said he was "saving her" for the moment when Justice Ruth Bader Ginsburg passed and a vacancy on the nine-member court arose.

He has previously nominated two men to the court: Justice Neil Gorsuch and Justice Brett Kavanaugh – both staunch Republicans, the latter of whom's appointment was shrouded in discontentment following sexual misconduct allegations – but said after Ginsburg's death his nominee to replace her would be a woman.

Saturday saw Trump announce that he is nominating Amy Coney Barrett to be the new high court justice during a ceremony at the White House Rose Garden. The Senate Judiciary Committee will begin confirmation hearings on Barrett's nomination on October 12.

So, who is Amy Coney Barrett?

The mother of seven children and a former law clerk to the late right-wing beacon Justice Antonin Scalia, Barrett, now 48, was a finalist for the Supreme Court spot that went to Brett Kavanaugh in 2018.

A devout Catholic and a favoured pick of social conservatives, Coney Barrett is a professor at the University of Notre Dame Law School and was nominated and confirmed to serve on the 7th Circuit Court of Appeals in Chicago in 2017.

She has remained on the bench for a short time but has written extensively on the subject of abortion throughout her career, which, liberals feel, may threaten the future of abortion access in the US.

In a law review article published in 1998 that Barrett wrote while a third-year law student, she and a co-author argued Catholic judges should be allowed to recuse themselves from certain cases involving abortion or the death penalty. She clarified in her 2017 confirmation to the 7th Circuit, however, that the issues she explored in the law review article don't reflect her opinions today.

"Would I or could I say, sitting here today, that that article and its every particular reflects how I think about these questions today with, as you say, the benefit of 20 years of experience and also the ability to speak solely in my own voice? No, it would not," she said.

Barrett – who has repeatedly insisted her faith does not compromise her work –  has also said she believes it highly unlikely for the landmark case Roe v. Wade to be overturned but doesn't see it as a "super-precedent" case, like Marbury v. Madison, that no court would ever overturn.

In her time on the 7th Circuit, Coney Barrett has voted in favour of re-hearing challenges to two abortion-related laws: a case challenging parental consent laws for minors seeking an abortion, and a case over an Indiana law that barred abortions for sex or disability and required the burial of fetal remains, according to Reuters and the Washington Post.

To secure the position on the Supreme Court, Barrett will still have to pass a gruelling confirmation hearing, where Democratic senators are likely to take a tough line, bringing up many of their voters' concerns.

Should her nomination be confirmed, conservative-leaning justices will hold a 6-3 majority on the Supreme Court, shifting its ideological balance for potentially decades to come.

The court's nine justices serve lifetime appointments, and their rulings can shape US public policy on everything from gun rights to abortion access to the Affordable Care Act.

READ MORE: The Family Of Breonna Taylor – A Black Woman Fatally Shot By US Police – Will Be Paid $12M In Settlement