Amy Dunne, the woman at the centre of the 2007 'Miss D' case, revealed that she was told she would be "done for murder" if she travelled to the UK to procure a medical abortion. 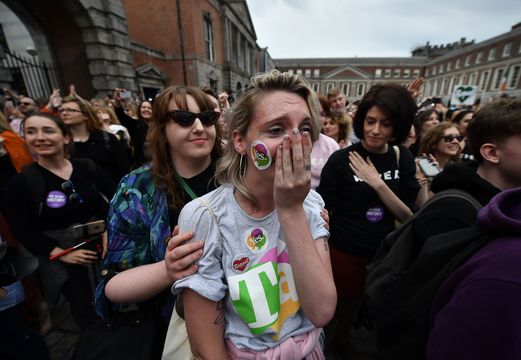 In April 2007, at the age of 17, Amy Dunne discovered that her baby had anencephaly; the absence of a major portion of the brain, skull, and scalp that occurs during embryonic development.

Doctors said the baby, a girl, would die soon after birth.

Speaking to the BBC, the 29-year-old mentioned that a social worker told her she could not leave.

The social worker then alerted police and the passport office to block Dunne’s departure.

Thus began an emotionally charged landmark legal battle that prompted protests and counter-protests. Dunne won – while drenched in grief – and was able to travel to Britain to end the pregnancy.

Abortion, at the time, was still very much illegal in Ireland, having remained that way after several referenda.

It was first banned in Ireland in 1861 by the Offences Against the Person Act. This law stayed in place after Irish independence from Britain.

The Eighth Amendment of the Constitution Act came into effect after a referendum on 7 September 1983.

The wording of the amendment referred to as Article 40.3.3 of the Constitution is:

This acknowledged the right to life of the unborn, equating it with the mother’s right to life. When it was passed 31 years ago with a 67% majority, it was heralded as a victory for pro-life activists.

On 25 May 2018, the Irish public voted by 66.4% to 33.6% in a referendum to repeal the Eighth Amendment. They approved the Thirty-sixth Amendment of the Constitution Bill 2018 to delete the current provisions of Article 40.3.

Dunne, who describes herself as pro-choice, became involved in the Repeal the 8th campaign, admitting that conducting interviews became difficult.

“I started to take it very personal," she told RTÉ's Today with Sean O'Rourke.

"It got just too much for me. Repeal changed my life. I’m not ashamed any more. Everyone should make their own decision."

She added that she supports calls for exclusion zones outside hospitals providing abortion services.

“I don’t think anyone should be allowed to protest outside a hospital Pro-life people should be ashamed of themselves. I think it’s sick... We all make decisions and they’re not made lightly.”

READ MORE: A 'New Approach' Will See Parishes Prepare Children For Sacraments Instead Of School

READ MORE: Miss World Had Her Crown Taken Away Because She Is A Mother – Now, She's Taking Legal Action