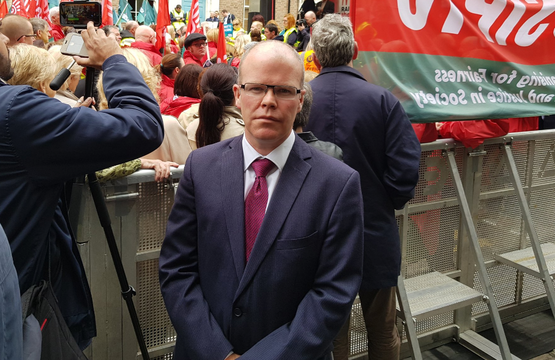 It's understood that the 'Euro-critical party' will aim to protect 'all human life'.

The newly-formed party – being referred to at the time of writing as the All Ireland Political Movement – is being spearheaded by Tóibín, who claims they the new group is "the fastest growing political movement in Ireland".

Public meetings are being held in various locations all this week in an attempt to fundraise and garner support. Meetings were also held in the run-up to Christmas in Kildare, Dublin, Tralee, Cavan, Navan, Dundalk, Wexford, Mayo and Monaghan.

It's understood that fundraising in the form of direct debit and church-gate collections have already begun.

Tóibín has advertised the group as one for those who feel unrepresented and "disenfranchised by the group think in the political system".

"We need to have public representatives who can ask the hard questions and who can stand up to the majority - that's the only way we'll see a wide spectrum of diversity in the Dáil."

"People are coming to us from a Sinn Féin background, a Fianna Fáil background an Independent background and even some from Fine Gael at the moment – and they're saying to us, that it's become clear to them that despite the fact that they've been working in those political parties for years, despite the fact that they've been building those parties and gathering votes for those parties, that they now understand that they're in the wrong party.

"And that they're in a party where the leadership of those parties are doing damage to their core values."

The Meath West TD went on to explain his new party's stance on a United Ireland.

"There is nothing to be feared to have more people involved in the bid for Irish Unity, in fact, if someone tries to deter or exclude people from this cause then they obviously don't have any real interest in a United Ireland at all".

According to the Irish Times, some 1,400 people have signed up to join the new political party.

It's also been reported that a letter was sent by the 44-year-old to supporters on Tuesday afternoon informing them that he has also picked a name for the party. It is understood he is in the process of registering that name both north and south and will reveal it in the coming days.

Tóibín has previously said that he expects to have seven councillors chosen before they stand candidates in May's council elections.

Prior to his resignation, Tóibín – who often takes to social media to berate Leo Varadkar and his political conduct – was suspended from Sinn Féin for six months for voting against abortion legislation in the Dáil.

The original draft of his new party's manifesto states that one of its core values is that “all human life should be protected and that no mother or child should be left behind”.

Ireland voted overwhelmingly in favour of decriminalising abortion in the Republic in May 2018. The vote followed a tense and aggrieving campaign which saw both Yes and No sides divide the voting population.

The Health (Regulation of Termination of Pregnancy) Bill 2018 was signed into law by President Higgins and thus allowed medical abortion to become legal in Ireland from 1 January.

It's believed that the as-yet-unnamed political party will seek to tighten the laws on abortion currently going through the Oireachtas.