Belfast IWD Rally To Call For Free, Safe And Legal Abortions In NI 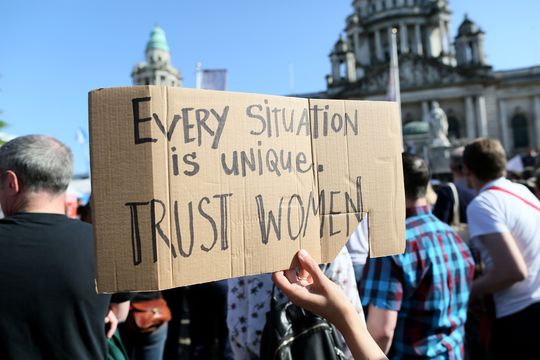 This year’s theme for the celebration is ‘The Time is Now – Women Rise Up’.

The Belfast International Women's Day rally takes place this Saturday and aims to shine a light on the lack of services available to women in NI facing crisis pregnancies.

"We have seen women’s rights take centre stage in recent years and our voices are at last beginning to be heard," Anne McVicker, chair of organisers, Reclaim the Agenda, said ahead of the event.

"Thousands of members of women’s groups, lobby organisations, trade unions and youth groups are saying enough is enough and are demanding change now."

Throughout the month-long festival in March, there will be everything from political debate, stand-up comedy, street art, films conferences on women’s health to lectures on subjects such as Women’s Imprisonment, ‘Toxic Masculinity’ and the Magdalene Laundries.

For the rally, the Abortion Rights Campaign (ARC) will join Alliance for Choice and other pro-choice groups calling for free, safe and legal abortion services all over the island of Ireland.

“During the referendum campaign to repeal the 8th, campaigners from all over the North travelled across the border to join canvassing groups, they put aside their own fight for abortion services by dedicating all their energies into our struggle," the press release reads.

"They showed complete and unwavering solidarity throughout, returning it is the very least we can do. Women and pregnant people in the North are being failed terribly on both sides of the water.

"Those wishing to access abortion in the Republic face prohibitive fees of up to €450, and a vista where travelling to Britain is a more viable option.

"Those who are unable to travel or afford the exorbitant fees in the south risk prosecution of up to life imprisonment for importing safe but illegal abortion pills. We have heard the stories, we know forcing people to travel or to break the law in order to access basic healthcare, is cruel.

"We join Alliance for Choice in their demand for the decriminalisation of abortion and access at home now.”

The Belfast IWD rally starts at 11am on Saturday 9 March at Writers Square, Belfast and will march on to City Hall.