Coleen Rooney has alleged that Rebekah Vardy has been sharing private information about her to The Sun newspaper for a number of years.
Irish Tatler Staff 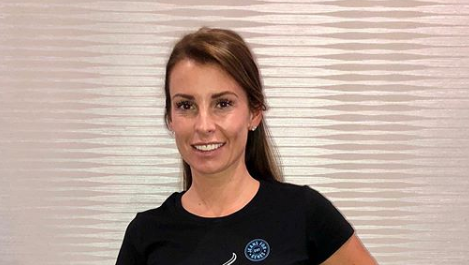 Responding to the claims, Rebekah Vardy asks Coleen Rooney: "What would I gain from selling stories on you?"

Coleen Rooney has accused Rebekah Vardy of leaking personal stories about her to The Sun newspaper, something Vardy has since strenuously denied.

The 33-year-old posted a message on her Twitter account via the iPhone Notes app that private Instagram stories, which are posts that disappear after 24 hours on the social media app, had been leaked to the tabloid newspaper. 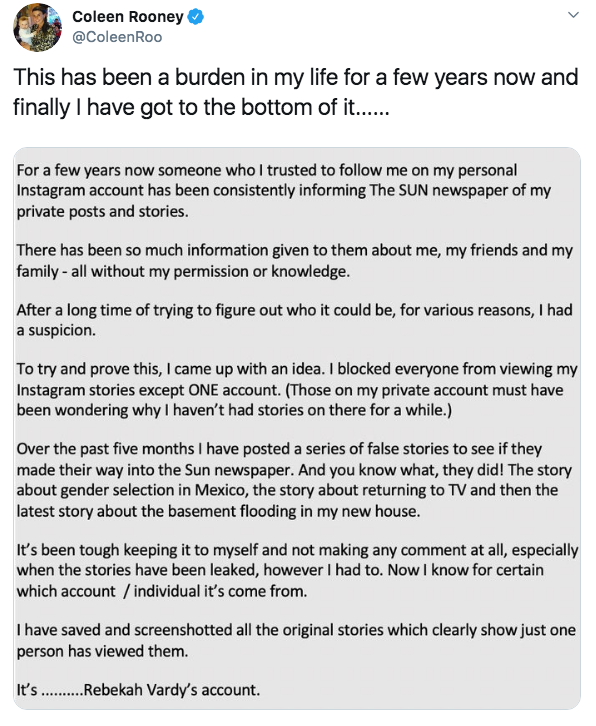 2
Rooney has both a public and private Instagram account, the latter of which she approved a small group of family and friends to share personal stories.

She said that she could identify that the source of some articles was someone who was watching the Instagram Stories on her private account and through trial and error, deduced that it was Vardy.

"For a few years now someone who I trusted to follow me on my personal Instagram account has been consistently informing The Sun newspaper of my private posts and stories," she wrote in a statement released across her social media channels.

"After a long time of trying to figure out who it could be, for various reasons, I had a suspicion. To try and prove this, I came up with an idea, I blocked everyone from viewing Instagram except ONE account. (Those on my private account must have been wondering why I haven't had stories on there for a while.)"

"Over the past five months I have posted a series of false stories to see if they made their way into the Sun newspaper. And you know what, they did!

Behind the scenes of my @closeronline shoot. This outfit didn’t make the mag but I loved it @bronaghmeere ❤️ Also, not only is @makeupbymikey amazing at hair & make, he is also a whizz with the wind machine  #pregnancy #mybodymybump

"It's been tough keeping it to myself and not making any comment at all, especially when the stories have been leaked, however I had to. Now I know for certain which account/individual it's come from.

"I have saved and screenshotted all the original stories which clearly show just one person has viewed them.

In response, Vardy denied that she was personally responsible and claimed that various people have had access to her account.

She said she was upset that Rooney had chosen to go public with her claims rather than speaking to her first.

Vardy said that she did not "need the money" and had nothing to gain from selling any stories to the newspapers.

"I'm not being funny Coleen but I don't need the money, what would I gain from selling stories on you?"

She said she was "so upset" as she is heavily pregnant and spoke to Coleen over the phone in an attempt to resolve this.

A spokesperson for Vardy has referred publications to her social media accounts, adding: "It isn’t true, she is now very upset and stressed so has passed it to her legal team to deal with. Such a shame that Coleen didn’t just call her when she had her number."

READ MORE: The New Trailer For Queer Eye Is Here

READ MORE: James Blake Calls Out The Sexist Idea That Jameela Jamil Is His ‘Muse’