Honouring the Forgotten Women of the Magdalene Laundries 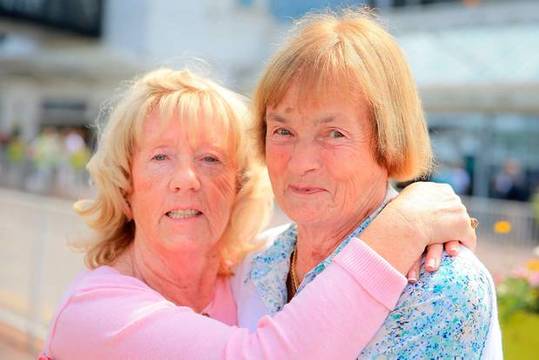 Breda Duffy and Martha Osmond, who were together in the Limerick Magdalene laundry arriving at Dublin AirportPaul Sherwood

The landmark two-day Dublin Honours Magdalenes event was an overdue tribute to the women who suffered in the Magdalene laundries.

With the momentum of so many female led movements being pushed around the world and right here at home with our own Repealthe8th movement. It is more important than ever for us to show our support for the women who suffered so now we don't have to. The Dublin Honours Magdalene saw over 400 women make their way to a reception hosted by the president to commemorate their time in the Magdalene Laundries. With women travelling from Ireland, the United Kingdom, America and even Australia, for some it was their first time returning back to Ireland, having escaped the laundries and forged a new life for themselves abroad.

The event was organised by the charitable group Dublin Honours Magdalene (DHM). The charity aims to "bring together Magdalene Laundry survivors to share experiences, and to gather the women's views on how the Magdalene Laundries should be remembered for future generations". Behind the event is businesswoman and Irish Tatler Chairwoman Norah Casey, who rallied support for the massive event from celebrities, volunteers and businesses to acknowledge the abuse and now documented terrible events that women suffered at the hands of the Magdalene institutions.

Speaking of the women she went to personally meet and chaperone from Dublin airport, Casey said, "For them this is just phenomenal. It’s not a happy occasion, it’s not a celebration, how could it be with those stories… but for all those terrible memories they have it’s nice to add a memory that’s something positive."

Along with the reception in Àras an Uachtaràin the women also attended a Gala dinner hosted in The Mansion House Dublin. Hundreds of Dubliners waited on Dawson Street to applaud the women as they arrived.

Today, Dublin honoured the women of the Magdalene Laundries, first at a moving ceremony in the home of the President, then welcomed by cheering crowds for an event at the Mansion House #ireland #history #magdalene #laundries #women #commemoration #memory #dublin #dublinhonoursmagdalenes

The guests were welcomed by the Lord Mayor of Dublin, Mícheál MaccDonnchadh and Minister for Justice and Equality, Charlie Flanagan. At the event, the Minister said of the occasion: “To say that I am privileged and humbled to be standing here tonight is an understatement.”

Long time supporter of Dublin Honours Magdalenes, Katherine O'Donnell said it was a pleasure to contribute to such an historic occasion. “As with the 'Magdalene Names Project' and the 'Flowers for Magdalenes' events, these two days will help to ensure that Irish society never forgets these resilient and proud Irish women - those in attendance and those who already passed on, including those that died behind convent walls."

Read More: What happens to women with crisis pregnancies now before the new legislation comes in?