The organisation has also seen an increase in callers. 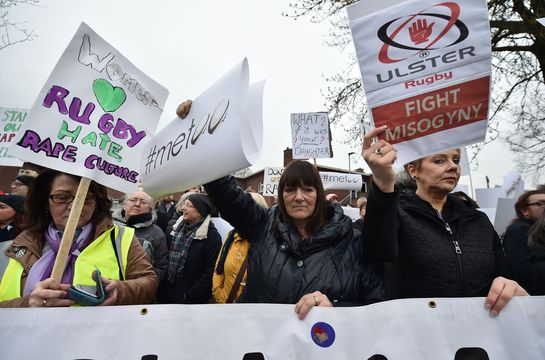 The Dublin Rape Crisis Centre (DRCC) benefitted by way of donations following the 2018 Belfast rape trial which saw the country divided over a rape case in which four high-profile men walked free.

The case made international news due largely to its timing in a post #MeToo world, and especially due to its shocking conclusion which saw all men walk free of any convictions.

It was this shock that spurred Irish people to donate some €70,000 in funding via text and online donations, according to a new report, following the lengthy trial which provoked public debate on how rape cases are prosecuted.

Writing in her overview for the report, DRCC Chief Executive Noeline Blackwell said: "Much of this funding came from public donations made anonymously through the DRCC website - and also via text - in the 90 days following the outcome of the Belfast rape trial of four young men, including two Ireland and Ulster rugby player.

"People told us of the upset about the cruelty of the court system and inappropriate social media messages.

“In deference to the intention of members of the public who made these donations, the funds have been ring-fenced in order to increase our capacity to support those who need it when they are attending court and Garda stations.”

The charity's annual report, published on Tuesday, also detailed that an increase has been seen in the number of people contacting the centre. As a result, they are calling for more services to cope with what it calls a "growing problem for public health".

Trending today: Love Island And The Power Of Himpathy

The DRCC, which operates the country’s National 24-Hour Freephone Helpline through a network of staff and volunteers, dealt with 13,367 contacts – approximately 270 every week in 2018. Of those callers, 77% were female and 22% were male.

Of those who provided their location, 65.7%, were from Dublin while 34.3% were from elsewhere in Ireland. Of those who disclosed the type of abuse suffered, 44.8% had experienced rape as adults, while 33% disclosed that they had been victims of childhood sexual abuse.

Of the 4,228 individual counselling appointments delivered, the majority (2,187) were crisis appointments for people who had experienced a recent rape or sexual assault (ie, in the past six months). 13 women also revealed that they became pregnant after being raped last year.

In the absence of sufficient data, the report notes, it remains unclear whether the upward curve in DRCC intake is the result of a rise in assaults or a cultural shift in attitudes toward reporting them.

Minister for Health Simon Harris has since launched a new e-health initiative Moving Forward from Sexual Violence – a programme of online psycho-education backed up by telephone assessment and counselling.

Moving Forward is being developed by DRCC in collaboration with UK trauma consultants and e-health solution developers, KRTS International Ltd. This innovative new service will commence on a pilot basis later this year.