Gigi Hadid Confirms She Was Pregnant During Fashion Month

Fashion month is a hectic, heady time for everyone involved – especially when you're one of the world's biggest supermodels and also a “few months” into your first pregnancy.
Irish Tatler Staff 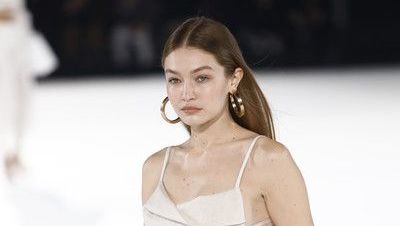 Gigi Hadid revealed that she was pregnant during Fashion Month in February which saw her walk over 16 shows in all four major fashion cities for AW20.

In a live-streamed interview with Maybelline, Hadid chatted to make-up artist Erin Parson about how rumours that she’d had facial fillers had been circulating.

In fact, she said, her plumper cheeks were down to her pregnancy glow, more noticeable during fashion month when she was “a few months preggo,” the supermodel laughed. She officially announced the news that she is expecting her first child with her boyfriend, Zayn Malik, at the end of April in an interview with American TV host Jimmy Fallon.

As she chatted with Parsons and brushed through her eyebrows, Hadid said that people have suspected that she's manipulated the shape of her eyebrows and used plastic surgery procedures to maintain her round face shape.

She added, "Also that people think I do fillers on my face, and that's why my face is round. I've had this since I was born," she said.

"Especially fashion month, when I was already, like, a few months preggo."

Gigi Hadid on whether pregnancy has changed her face shape: “I think I already had the cheeks already, so it’s not like there’s a lot to fill in.” pic.twitter.com/thIidgA4YV

In February, Hadid walked runway shows in New York, London, Milan, and Paris as well as an early stopover in LA for Tom Ford’s showcase.

And when TMZ reported that Hadid and her on-again, off-again boyfriend Zayn Malik were expecting a child in April, the outlet said the supermodel was 20-weeks into her pregnancy — meaning she was around one month pregnant during Fashion Month.

During the interview, Hadid touched upon speculation surrounding her face and surgical enhancements, adding that – despite being five months pregnant – she feels pregnancy hasn't changed her appearance that drastically.

"Well, I think I like, have the cheeks already, so it's like there's not a lot to like, fill in," she joked, adding that she would welcome bodily transformations while carrying her child because she's "happy with the natural process of the world."

"For those wondering, I've never injected anything into my face," she said. "I'm so happy for everyone to do whatever they want that makes them happy and makes them feel more comfortable and good about themselves.

"Me personally, it terrifies me. I feel like I'm too much of a control freak that I'm like, what if it goes wrong?" Hadid told Parsons, who remarked that the model's face had actually thinned out since she was 17 years old.

"It slimmed down for sure, but also, it's like, I think that people are like, so fast to do permanent things to their face. When really anything — I've loved being like, 'I accept myself how it is.' That doesn't mean I don't have insecurities sometimes," Hadid said.

She explained that instead of rushing to alter her face, she's learned to use makeup to enhance her features.

"For special occasions, you can sculpt your nose a little bit or do whatever with makeup," the supermodel said. "Makeup is such a beautiful tool to help you feel your best for special moments but to also accept your beautiful face for exactly how God made it — and your mama and dada."

And while Gigi hasn’t officially revealed her due date or whether she knows the sex of her baby, her mother Yolanda hinted that she’s due to give birth in September during an interview with Dutch radio station, RTL Boulevard.