Why You Shouldn't Go To Work On September 20

It's time to take a stand. 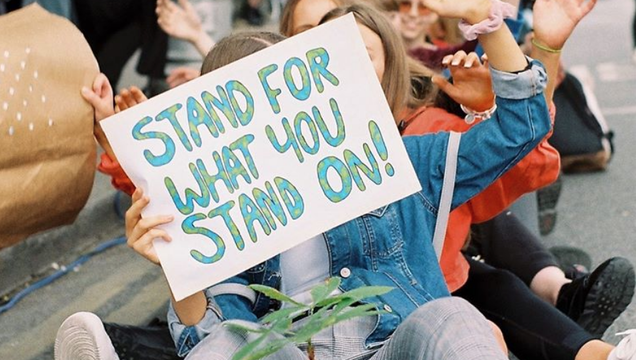 SAVE THE DATE: September 20.

The Amazon rainforest is burning, the Great Barrier Reef is dying, Alaska’s sea ice is completely melting, California’s beaches are disappearing, and our leaders are failing to do anything about it.

Every Friday, teenagers around the world walk out of school to protest against climate change. The international movement, known as School Strike for Climate or Fridays for Future, was founded by teen activist Greta Thunberg, with the aim of making world leaders finally wake up to the devastating impact we are having on the planet, and take charge in tackling climate change.

Despite calling a climate emergency back in May, Ireland has a long way to go before we make an actual difference in the fight against global warming.

Now, those same teenagers are calling on us, the adults of the world, to walk out of work and join them on the world’s biggest global climate strike on Friday, September 20.

WHAT IS the global climate strike?

This September, millions of us will walk out of our workplaces and homes to join young climate strikers on the streets and demand an end to the age of fossil fuels

As it says on the official strike page: “Our house is on fire — let’s act like it. We demand climate justice for everyone.”

WHEN IS the global climate strike?

The Global Climate Strike is on Friday, September 20.

TRENDING TODAY: The Effects A No-Deal Brexit Would Have On Food, Health And Travel

where is the global climate strike taking place?

The Global Climate Strike will be taking place at various locations all around the world. So far, in Ireland, people will gather in Dublin, Cork, Limerick and Galway city centres as well as in Drogheda, Tralee, Kenmare, Ennis, Navan and Dundalk. You can find your nearest location by clicking here and using the interactive map.

Why SHould i take part in the global climate strike?

We're going to let an open letter from 14-year-old teen activist Holly Gillibrand answer this one.

To the adults of the world,

We are calling for a global strike on 20 September and we are asking for you to join us in protest.

We urgently need to raise as much awareness of the climate emergency as possible. This is a crisis that is affecting people living now, and it will affect my generation the most in future. If we don’t act now, then it will be too late.

Our planet is currently warming faster than at any other point in its history, with the last four years being the hottest ever. In the last 50 years alone, winter temperatures in the Arctic have risen by 3-4°C, causing rising sea levels. Global emissions and the concentration of carbon dioxide in the atmosphere are rising rapidly and show no signs of slowing down.

These factors are already having a devastating impact on the planet and its eco-structure, and they will continue to do so.

So we need you to strike for as long as you can. You can find details of your nearest strike here, and if there isn’t one near you, then please organise one yourself. Create eye-catching banners, organise die-ins (a type of protest where you lie ‘dead’ on the floor) and help us to make as much noise as possible.

Many of you have been unable, or unwilling, to join us on our strikes so far. Perhaps this is because you still don’t understand the problems that we are fighting against, or you think that our protests are for young people and children only. But we need you to strike just as much as we need the youths of the world to strike.

I’ve been striking as a #FridaysforFuture activist every Friday since 11 January, and my first strike was scary because it was my first ever protest. I didn’t know what to expect, or how people would react to us. So I can understand if you have never been on a strike before and you’re feeling nervous about joining us.

My advice would be to strike with as many people as possible, and remember what you are striking for. A moment of feeling nervous or embarrassed is nothing compared to how my generation will suffer in the future if we don’t take a stand now.

The strike on 20 September certainly won’t be our last, because we need to continue to put pressure on governments around the world. We need them to listen to us and to start taking action.

But this strike is crucial because the United Nation’s climate action summit is going to be held three days later, on 23 September. António Guterres, the secretary-general of the UN, has called us inspirational, but the summit will prove whether he and the world’s leaders have actually been listening to us. We want to see a change being made.

As a child who has not yet had a proper education in climate change, it is not up to me to say specifically what changes the UN needs to take. But necessary and unprecedented action does need to be taken, and urgently. We want to see concrete steps being taken to reduce carbon emissions and limit global warming to 1.5°C.

The youths of the world have woken up to this crisis and we are deciding to take a stand. You should know that your actions now will dictate our entire lives.

So we need you to take a stand, too. Even if you can’t join this strike, join us on the next one, or the one after that.

I hope that we have woken you up to this crisis, and that you are prepared to join us to fight for a better world, and a better future.

✨ No one is too small to make a difference ✨⁣ ⁣ I came across an article this week that said twice as many Swedes have chosen to travel by train instead of air this past year. Passenger numbers in Swedish airports have literally dropped. ⁣ ⁣ Greta Thunberg talked, and the world listened. Remember this fact next time you think you can’t make a difference! A 16 year old Swedish young woman literally has the attention of oil executives and the entire population of a country making travel choices. History (or herstory) is being made, folks. ⁣ ⁣ Has @gretathunberg or anyone else impacted the way you think about the environment? Please share ⁣ ⁣ Photo by @justcomics_official  #climateemergency #climatechange #savetheearth #thereisnoplanetb #climateaction #climatechangeisreal #gretathunberg #savetheplanet #environmentalist #greenlife

READ MORE: What Is Climate Anxiety + How To Go About Soothing It