Harvey Weinstein Is Sentenced To 23 Years In Prison

Dozens of women have come forward with allegations of sexual misconduct, including rape, against Weinstein since October 2017. 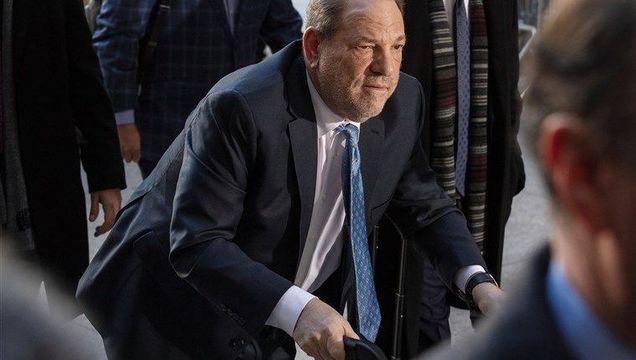 Harvey Weinstein was sentenced to 23 years in prison in a New York City courtroom after his February conviction on charges of first-degree criminal sexual act and third-degree rape, according to multiple reports.

Under the law, the judge could have imposed a sentence of up to 29 years. Prosecutors had asked for the maximum while Weinstein’s defence attorneys argued for the minimum sentence of five years.

Last month, a jury of seven men and five women at the New York supreme court took five days to reach a verdict which is that he is guilty of a criminal sexual act in the first degree and rape in the third degree.

The conviction marks a final topple of the head honcho whose fall from grace has been clearly defined by the vulnerable actors who have suffered by his hand.

Harvey Weinstein has been declared guilty on two counts

While he was not convicted of the more serious charges, this is a big day for the brave women who stepped forward & risked everything to speak out

Weinstein was originally accused back in October 2017 when an in-depth investigative article by The New York Times was published which noted the stories of several women who came forward with accusations of sexual harassment regarding the Hollywood producer.

The Miramax co-founder was indicted in May 2018, on charges of rape in the first and third degrees and first-degree criminal sexual act.

He denied all allegations of non-consensual sex.

It was this case that catapulted the #MeToo movement and Time's Up campaigns to support the victims of sexual misconduct.

In a previous interview, the disgraced movie mogul told The Spectator: “You were born rich and privileged and you were handsome. I was born poor, ugly, Jewish and had to fight all my life to get somewhere. You got lotsa girls, no girl looked at me until I made it big in Hollywood.”

He continued: “Yes, I did offer them acting jobs in exchange for sex, but so did and still does everyone. But I never, ever forced myself on a single woman.”

Rose McGowan, a Hollywood actress who is one of 80 women who claims that they were abused by Weinstein, refuted his statements on Twitter.

"Rapists are liars," she wrote, followed by a second tweet claiming that his quotes do not make logistical sense.

Being that I was in the middle of my second film for his company, having NEVER met him before the morning of my rape, and never worked for him again, this is a clear lie. Nice try, rapist. https://t.co/A2l3U1Wp4h

Although more than 80 women have claimed they were victimized by Weinstein, according to The New York Times, the charges in the Manhattan trial were focused on only two women: former production assistant Miriam “Mimi” Haleyi and aspiring actress Jessica Mann.

“Different women, from different places, decades apart faced the same crimes,” Hast told jurors. Gesturing to Weinstein, she added: “The evidence will be clear that the man seated right there was not just a titan in Hollywood, but a rapist.”

Hast described one alleged attack in 2006: a woman had gone to Weinstein’s SoHo apartment in New York expecting a business conversation when the film mogul “dramatically changed without warning”. He forced her on to his bed and performed oral sex on her, Hast said.

“He put his weight on top of her and held her down. She kept saying no, kept trying to get up… but the defendant put his mouth on her vagina. She told him she had a tampon in. He yanked it out and continued orally sexually assaulting her.”

On another occasion, Hast alleged, Weinstein showed up uninvited to the hotel room of The Sopranos actor Annabella Sciorra in his underwear, with baby oil in one hand and a videotape in the other.

Haleyi was the second of the six women who were expected to testify that Weinstein attacked them.

"The Sopranos" actress Annabella Sciorra also testified that Weinstein raped her in the winter of 1993-94.

READ MORE: How Gwyneth Paltrow Helped The Weinstein Investigation – Even When He Was In Her House