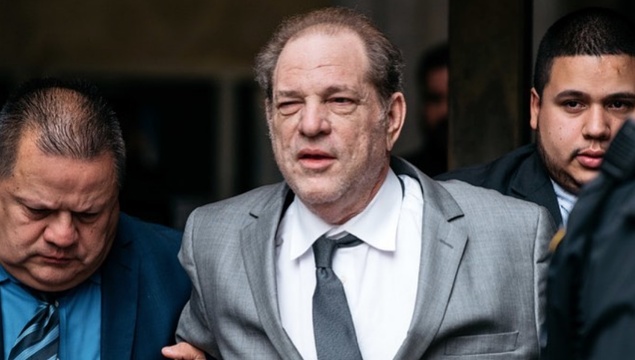 67-year-old Harvey Weinstein, once one of the most powerful figures in Hollywood, has been found guilty in two of the five cases that ended him in court.

The Hollywood producer whose sexual abuse of aspiring young female actors sparked the #MeToo movement has been brought to justice after a New York jury found him guilty.

Last month, a jury of seven men and five women at the New York supreme court took five days to reach a verdict which is that he is guilty of a criminal sexual act in the first degree and rape in the third degree.

Yesterday, Harvey Weinstein was sentenced to 23 years in prison in a New York City courtroom after his February conviction on charges of first-degree criminal sexual act and third-degree rape, according to multiple reports.

The conviction marks a final topple of the head honcho whose fall from grace has been clearly defined by the vulnerable actors who have suffered by his hand.

But, what do his charges actually mean?

Although he was convicted on two counts, the former movie mogul was also acquitted on three other, far more serious charges – ones that would, almost certainly, end in life imprisonment.

The complexities of each charge are vast and involve harrowing testimonies from a number of accusers.

Below, we've detailed every charge against Weinstein, what they mean, and what each verdict was.

In Weinstein’s case, prosecutors called to the stand Annabella Sciorra, who said that Weinstein raped her in the 1990s. According to the Times, she testified that Weinstein showed up at her apartment and pushed his way inside. Then he unbuttoned his shirt, pushed her onto her bed, pinned her arms above her head, and raped her.

However, jurors could not prove beyond a reasonable doubt that this happened. As a result, he was acquitted of these charges.

This charges stemmed from accusations made by production assistant Miriam Haley, who had testified that Weinstein forced her to perform oral sex on him at his New York City apartment in 2006. For this, Weinstein was found guilty.

Weinstein was also found not guilty on a second count of predatory sexual assault made by former actress Jessica Mann. Her case made for difficult decision making by prosecutors, as her relationship with Weinstein had reportedly involved consensual sex separate from the rape allegations she had made against him.

4. Rape in the first degree

Under New York law, this is the most serious rape charge.

According to the state’s penal code, a person is guilty of rape in the first degree if they engage “in sexual intercourse with another person” by “forcible compulsion” or if the victim is “incapable of consent by reason of being physically helpless” (a person may also be guilty of this crime if they sexually assault a child, which was not alleged in the Weinstein trial).

The 67-year-old was also cleared of this — a count that would have carried with it a potential maximum sentence of 25 years in prison. The charge was also brought on by Weinstein's encounter with Jessica Mann, as detailed above.

5. Rape in the third degree

In New York, a person is guilty of this crime if they engage “in sexual intercourse with another person without such person’s consent.”

This charge does not require prosecutors to prove “forcible compulsion” on the part of the defendant or that the victim was “physically helpless” at the time. In addition to the first-degree rape charge, Weinstein was charged with third-degree rape in connection with testimony by Jessica Mann.

He was convicted on this charge. That means that according to the jury, the prosecution proved beyond a reasonable doubt that Mann had not consented to what happened in 2013, but not that there was “forcible compulsion” involved.

The monumental aftermath of such verdicts will, hopefully, see more survivors of sexual abuse come forward with their stories, following decades of victim-blaming in the aftermath of rape cases.

Following the announcement, Weinstein was remanded into custody until a sentencing hearing scheduled for March 11, where the charges he was convicted of could land him up to 25 years in prison.

May today’s Harvey Weinstein guilty verdict continue to move the needle toward a future where men are held accountable and women are believed. And may that future forever honor the brave women who courageously refused to be silenced. They’re the real heroes... #MeToo #TimesUp

Weinstein was originally accused back in October 2017 when an in-depth investigative article by The New York Times was published which noted the stories of several women who came forward with accusations of sexual harassment regarding the Hollywood producer.

The Miramax co-founder was indicted in May 2018, on charges of rape in the first and third degrees and first-degree criminal sexual act.

He denied all allegations of non-consensual sex.

It was this case that catapulted the #MeToo movement and Time's Up campaigns to support the victims of sexual misconduct.

In a previous interview, the disgraced movie mogul told The Spectator: “You were born rich and privileged and you were handsome. I was born poor, ugly, Jewish and had to fight all my life to get somewhere. You got lotsa girls, no girl looked at me until I made it big in Hollywood.”

He continued: “Yes, I did offer them acting jobs in exchange for sex, but so did and still does everyone. But I never, ever forced myself on a single woman.”

Rose McGowan, a Hollywood actress who is one of 80 women who claims that they were abused by Weinstein, refuted his statements on Twitter.

"Rapists are liars," she wrote, followed by a second tweet claiming that his quotes do not make logistical sense.

Being that I was in the middle of my second film for his company, having NEVER met him before the morning of my rape, and never worked for him again, this is a clear lie. Nice try, rapist. https://t.co/A2l3U1Wp4h

Back in December, Weinstein reached a tentative $25 million (€22.5 million) settlement agreement with dozens of his sexual misconduct accusers, as per the New York Times.

Per the deal, his accusers — along with potential claimants who could join in coming months — would share in the payout.

The deal would also bring to an end nearly every such lawsuit against him and his former company.

A number of parties involved in legal proceedings have expressed disdain at the tentative deal.

"This settlement breaks my heart," Zoë Brock, a model who was one of the first women to accuse Weinstein of sexual misconduct, said in a statement.

"I have signed it only because I have explored every other legal option and at this point have found no alternative," Brock said, adding: "Let us hope the criminal system does not go as easy on Harvey as the civil system has."

The former Weinstein Company boss recently spoke with the New York Post, making the claim that he actually did a lot more for women in cinema than he has been given credit for.

"I made more movies directed by women and about women than any filmmaker, and I’m talking about 30 years ago. I’m not talking about now when it’s vogue. I did it first! I pioneered it!

"It all got eviscerated because of what happened. My work has been forgotten."

Weinstein conducted the interview in a medical clinic following spinal surgery. At one point, he hailed The Weinstein Company for its purportedly progressive nature, stating:

"This was a company that took social issues and tackled them."

Weinstein also highlighted his charity work and threatened to shut the interview down whenever a question that he didn't approve of was fielded.

“I want this city to recognise who I was instead of what I’ve become," he lamented.

“Different women, from different places, decades apart faced the same crimes,” Hast told jurors. Gesturing to Weinstein, she added: “The evidence will be clear that the man seated right there was not just a titan in Hollywood, but a rapist.”

Hast described one alleged attack in 2006: a woman had gone to Weinstein’s SoHo apartment in New York expecting a business conversation when the film mogul “dramatically changed without warning”. He forced her on to his bed and performed oral sex on her, Hast said.

“He put his weight on top of her and held her down. She kept saying no, kept trying to get up… but the defendant put his mouth on her vagina. She told him she had a tampon in. He yanked it out and continued orally sexually assaulting her.”

On another occasion, Hast alleged, Weinstein showed up uninvited to the hotel room of The Sopranos actor Annabella Sciorra in his underwear, with baby oil in one hand and a videotape in the other.

Haleyi was the second of the six women who were expected to testify that Weinstein attacked them.

"The Sopranos" actress Annabella Sciorra also testified that Weinstein raped her in the winter of 1993-94.

READ MORE: The Secret Benefits Of Menstruation When It Comes To Sport