Oppressive Or Empowering? The Complicated History Of High Heels

As chunky trainers gather dust on high street shelves, sky-high stilettos have become divisive. For some they symbolise the patriarchy, for others, they mean sex, empowerment and fluidity. 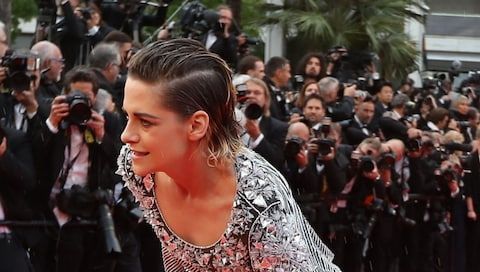 Some weeks ago, the pair spoke about their relationship and women’s shoes on BBC Radio 4’s Today programme.

Despite saying she had been told by numerous individuals that Blahnik’s shoes are comfortable, the classicist and author said: “By and large, [high heels] are a symbol of women’s oppression.”

"We deplore things like Chinese foot-binding; we think how terrible – and then we push women with the specious idea that it’s giving them power into shoes they can hardly balance in," she continued.

The topic of high heels has come back into vogue purely due to their bewildering absence from seasonal shows. In January 2014 the late Karl Lagerfeld held a Chanel haute couture show set in the fictional ‘Cambon Club’.

Led by Cara Delevingne, models ambled at a sultry pace down the runway to the sounds of a string orchestra, while flogging bejewelled wares.

So far, so haute couture.

The big difference? Each model’s outfit was completed with some bespoke sneakers, each pair costing an estimated €3,000 and taking some 30+ hours to make. But while the choice of footwear may have raised eyebrows, it also represented a radical step.

Five years on, trainers still boast the zeitgeist status they had then, with enough intricate designs available now to beat the band.

Celebrity-favourites include Louis Vuitton Archlights and the Balenciaga Triple S, both coming in at around €600 – €1,000 a pair, depending on the style, colour and iteration.

Serena Williams even donned sneakers to Prince Harry and Meghan Markle’s wedding after-party under her Valentino gown, as did Hailey Bieber at her recent South Carolina nuptials.

Back in June 2019, a social media campaign against discriminative dress codes and the forceful wearing of high heels at work for women in Japan went viral, with thousands joining the #KuToo movement.

Nearly 20,000 women signed an online petition demanding that the government outright ban companies from requiring female employees to wear high heels while on the job.

The #KuToo campaign – a play on the word for shoes, “kutsu” in Japanese, and “kutsuu”, which means pain – was started by actor and freelance writer Yumi Ishikawa, who unknowingly launched the revolution after tweeting about being forced to wear high heels while working at a part-time job in a funeral parlour.

Her comments drew an overwhelming response from women.

“Today we submitted a petition calling for the introduction of laws banning employers from forcing women to wear heels as sexual discrimination or harassment," Ishikawa told reporters.

The actor explained how a government official had told her she “was a woman and sympathetic to our petition … and told us that this is the first time voices of this kind had reached the ministry”.

Campaigners said the shoes were akin to modern foot-binding – the, now (thankfully) antiquated, Chinese custom of applying tight binding to the feet of young girls to modify the shape and size of their feet in order to please future husbands.

Others also urged that dress codes such as the near-ubiquitous business suits for men be loosened in the Japanese workplace.

Progressive though it may seem, this isn't the first instance that women have revolted against misogynistic footwear practices in the workplace.

A similar petition against heels in the workplace was signed by over 150,000 people in support of UK receptionist Nicola Thorp, who was sent home from her job in May 2016 for refusing to wear shoes with 'at least a two-inch heel' in her place of work.

When she refused, she was sent home from the accounting firm PwC without pay.

“I refused to work for a company that expected women to wear makeup, heels and a skirt. This is unacceptable in 2017,” she said.

“People say sexism is not an issue anymore. But when a man who has admitted publicly to sexually harassing women is the leader of the free world, it is more crucial than ever to have laws that protect women.”

Thorp said her heel revolt, while a protest against sexism and discrimination, was also a matter of public health given the toll that high heels take on women’s feet.

“The company expected me to do a nine-hour shift on my feet escorting clients to meeting rooms,” she said. “I told them that I just wouldn’t be able to do that in heels.”

In 2015, the director of the Cannes Film Festival also found himself in hot water when he denied several women access to the red carpet for not wearing heels. When headlines fell out of his favour, he apologised to those turned away –– only for Julia Roberts and Kristen Stewart to protest the lofty dress code, by going barefoot the following year.

Ingrid Hodnebo, a spokesperson for Norway’s Socialist Left Party, commented on the airline's dress code at the time, saying that “[i]t is almost comical that we face these issues in 2019."

In Bad Feminist, writer Roxane Gay defends such stereotypical “female” things as her love of pink, rejecting the idea that feminism must exclude the trappings of female culture.

However, is denigrating girliness to the point of avoidance actually heightening the oppressive undercurrent?

We're living in a time where woman-centred thought and choice is actually being considered (at least, in the Western World) – however, one must be careful not to hold up the metaphor for the thing above the thing itself.

Now is also a time in which shoes of all kinds are available to men, women and those of the non-binary persuasion – meaning the patriarchal burden is being shared, diluted and even flipped.

That is to say, systemically.

However, when the system no longer panders to misogyny – do old rules still apply?

Maybe that's not the point. The point seems to be that instead of banning formerly oppressive symbols, we should be eschewing enforced gender expectations and social norms instead.

Then they are just what are they supposed to be – a pair of shoes. The details of which are be left up to the individual.

After all, one person's oppression can be another’s liberation.

READ MORE: More To Do – What We Are Still Fighting For This International Women’s Day

READ MORE: The Gender Pay Gap In Ireland Broken Down