So You Posted A Black Square To Instagram Yesterday, Here's What To Do Next

Take your allyship a step further. 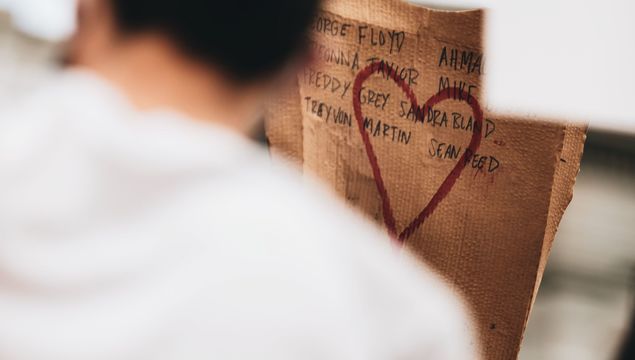 It's what you do next that matters most.

Yesterday, June 2 2020 aka Black Out Tuesday something particularly powerful happened: social media turned black. Influencers, brands and individuals posted a black square on their Instagram feeds in solidarity with the Black Lives Matter movement. The idea was to disrupt ‘business as usual’ and spread the word about the racism black people suffer on a daily basis, which has recently come to the fore after the brutal murder of George Floyd and subsequent protests.

After a day of scrolling through a sea of black squares, it's possible that the original purpose of the movement has been lost. The idea was to encourage non-black people to refrain from posting typical content they would have shared on Instagram so that black voices could be heard, and to amplify the voices of black people. While showing solidarity with the Black Lives Matter movement is a well-meaning gesture, and the heap of black squares on Instagram sent a powerful message, if you’re just going to go back to business, as usual, today or the rest of days for that matter, it’s a little meaningless.

Once you’ve posted your black square if you chose to do so, take some time to think about your own prejudices and actions. It's not enough to post a black square and close the app. Whether it’s by donating money, attending protests, educating yourself or amplifying the voices of black people, there are many ways to support the global struggle against racism. Below, you’ll find just a few. This isn’t intended to be a comprehensive list, and we’ll continue to add to it as events evolve.

Irish Tatler stands with all of the people outraged by the deaths of George Floyd, Breonna Taylor, Tony McDade, Ahmaud Arbery and countless others who have been slain as a result of racial profiling.

what you can do next:

It is our responsibility as allies to be as informed and educated as we can. It is not a black person's job nor duty to educate you on their own oppression. Do your own research on institutionalised and societal racism against the black community, the Black Lives Matter movement, white privilege and try to go outside of your Twitter feed. There are plenty of books, articles, and essays out there — even documentaries like I Am Not Your Negro or Strong Island. However you chose to educate yourself, be smart about what you are reading, watching, and listening to.

Even with all the research you are doing, know and actively recognise that, if you're a non-black person, you will never be able to fully comprehend or understand what it is like to be black or gain access to that perspective. Acknowledge this privilege and use it to challenge racial injustices towards the black community.

In addition to educating yourself and checking your privilege, there are still a lot of ways you can take immediate action. Something you can do right this second is to find a Black Lives Matter organisation you can donate money to. If you have the means to donate to these organisations, whether that be €10 or €100, every single euro counts.

Irish Network Against Racism: INAR is a national network of diverse Civil Society Organisations committed to combating racism and all related forms of discrimination in every sphere of life in Ireland. They are dedicated to finding common strategies and policy positions for combating racism, finding ways of complementing each other’s work, and to offering cross-community and cross-sectoral support and solidarity.

George Floyd Memorial Fund: A GoFundMe page has been set up in homage to George Floyd, the 46-year-old man who died after being arrested by police outside a shop in Minneapolis, Minnesota.

Organised by George's brother Philonise Floyd, the pages hopes to raise funds to cover funeral and burial expenses, grief counselling and lodging and travel for all court proceedings.

The page also says a portion of the funds will go toward the estate of George Floyd "for the benefit and care of his children and their educational fund."

I Run With Maud: I Run With Maud aims to pay homage to 25-year-old Ahmaud Arbery, nicknamed Maud, who was shot and killed by two white men while out jogging in Georgia.

Arbery loved running. Now, the hashtag #IRunWithMaud has travelled the world, with runners from London to New York completing the 2.23-mile trip – a tribute to the date of his death, which occurred on 23 February.

Black Visions Collective: BLC is a Black, Trans, and Queer-led organization in affiliation with the Black Lives Matter Global Network and the official chapter in Minnesota. Their work is grounded in long term campaigns linked to systemic change, community engagement and political education, leadership development and cultural organising rooted in transformative justice through a Black queer feminist lens.

The Bail Project: The Bail Project is a national nonprofit organisation that pays bail for people in need, reuniting families and restoring the presumption of innocence. You can follow them here.

To demand justice for George Floyd, you can sign the petition here.

To demand that the police officers involved with George Floyd's death are arrested and charged with second-degree murder, you can sign the petition here.

To demand the immediate arrest of the three officers who were present when Chauvin kneeled on George Floyd's neck, sign the petition here.

To demand justice for Belly Mujinga, the railway worker who died from coronavirus after she was spat on by a man claiming to have COVID-19, you can sign the petition here.

To demand justice for Breonna Taylor, the Black emergency medical technician who was fatally shot in her apartment by the Louisville Metro Police Department, sign the petition here.

We are still in the wake of a pandemic, therefore, not everyone is able to protest on-the-ground. But, if you are able (and healthy) to demonstrate solidarity by participating in a protest or vigil, there is a socially distanced protest taking place this Saturday, June 6. You can find more information about that here.

Otherwise, there are plenty of ways of you can protest from the comfort of your own home. Read more on that here.

If you want to help people at an individual level, the best way to start is by supporting black people’s creative and business endeavours. Buy their books, music, art or films; donate to their Patreon pages; amplify their voices by sharing or retweeting; and support their shops, restaurants, cafés or bars.

READ: 10 Black Irish Creatives You Can Support Today (And Everyday)