"It's important that you are an ally." 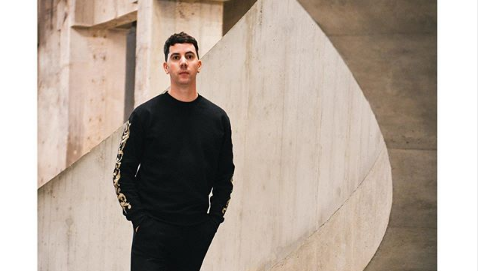 Joe Caslin is no stranger to a little controversy.

Born in Roscommon, the impressive multi-hyphenate acquired overnight fame back in 2015 when a large scale mural of his depicting two men embracing – part of his Our Nation's Sons project – found itself mounted on a George's Street building providing thought-provoking rhetoric ahead of the forthcoming same-sex marriage referendum later than year.

His work makes use of towering buildings as urban canvases with an aim to engage directly with the public on societal issues of modern Ireland, ranging from homelessness and emigration to disenfranchisement and apathy.

His more recent series The Volunteers attempts to “humanise the narratives around mental health" by holding a mirror up to society and provoking a more empathetic approach to an attitude that remains fraught with insecurities.

What many don't know about Caslin is his fervent activism with the Dublin Rape Crisis Centre (DRCC) –– something he grew inspired to become a part of by way of his day job as a secondary school teacher.

"I got involved in the DRCC back in 2018 when I created a number of pieces for them around the idea of consent," Caslin tells Irish Tatler.

"The topic came crashing into school education quite abruptly as a result of a number of rape trials going on in the country at the time and I would have three students stay inside with me during lunchtime quite often to discuss the idea of consent.

"They found themselves greatly affected by a number of things they heard in the news at that time and I sympathised with them. They then, in essence, said to me "you have a voice, do something about it".

"It also spoke to me personally in that, while I, fortunately, haven't been a victim of sexual violence, I have come across a number of friends and family who have. It's important that you are an ally."

"The two pieces I donated essentially depict the capability and incapacitation of rape and sexual assault. In 'I Said No', what's evoked is the screaming dismay of the action, whereas in 'I Couldn't Say No', it depicts the silence of the unconscious or unable."

For 40 years, it has provided crisis counselling and long-term therapy to adult women and men who have experienced rape, sexual assault and childhood sexual abuse. Its services include a national 24-hour helpline, face-to-face counselling, Garda and court accompaniment and training programmes.

In addition, they engage in policy interventions and public awareness campaigns.

Joe's works have recently been exhibited as part of an online auction for the DRCC alongside pieces by other artists such as Fatti Burke and Conor Merriman.

The works – each of which conceptualises 'Hope' – celebrate 40 years of the organisation and aim to raise money for their tireless efforts in achieving empathetic and tangible societal progress, something Joe entrusts the future generation with entirely.

"I feel so absolutely positive about future generations," Joe says.

"I love working with kids and watching their ideas push the boundaries of secondary schooling. We speak about some of the topics of my works in quieter moments such as painting or drawing and to be able to discuss the broader aspects of consent or mental health with them is amazing.

"It's along that vein that I think International Men's Day is a good thing – if a bit ridiculous. It's like everything else in that it's black and white and I live in the grey area. If it can highlight things that can get better, then it's fundamentally good.

"We already live in a patriarchal society and we really don't need any more of that – but if it gets men to believe that bottling up emotions is bad and that anything about talking things out is quintessentially fitting with one gender over another – then it is vital."

Living in the Venn diagram of activism, teaching and creating ("one can't exist without the other") Caslin feels an affinity with the term 'feminist' and simply tries to live by highlighting societal issues that he believes are important.

"We've seen enough mansplaining in society, we don't need any more. I see everyone as equal and treat my students as such."

If you or anyone you know needs to contact the Dublin Rape Crisis Centre, it operates a National helpline at 1800 77 8888 which is open 24 hours a day.

READ MORE: Ahead Of The Festive Season – Do You Experience Enjoyment Anxiety?