The airline has come under scrutiny for their recent take on breastfeeding, which sees them wanting to "keep the peace on board" - but are they fair or antiquated? 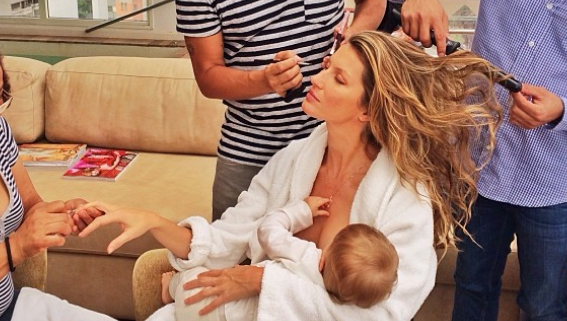 Airline KLM’s breastfeeding policy has caused outrage online after a spokesperson said mothers could be asked to “cover-up” while feeding their babies during a flight.

The Dutch airline's policy came under fire as a passenger – who allegedly experienced a difficult time when breastfeeding on a KLM flight– took to Facebook to share her story.

Shelby Angel posted to the airline's Facebook page to share her experience of attempting to feed her one-year-old on a KLM flight while travelling from San Francisco to Amsterdam.

“I breastfeed her. It calms her and helps her sleep and makes her comfortable,” wrote Angel.

“She’s also a busy toddler who doesn’t like to be covered. I do my best to be discreet, but sometimes some skin shows. Before we even took off, I was approached by a flight attendant carrying a blanket.

Here's a warning to all breastfeeding moms: do NOT fly with KLM! A month ago, I was flying with my one year old on a KLM...

She told me (and I quote) ‘if you want to continue doing the breastfeeding, you need to cover yourself.’”

Angel refused, explaining that her daughter becomes upset when covered. The flight attendant then allegedly warned Angel that if anyone complained, she would be responsible.

“The rest of this flight, that flight attendant would not so much as look me in the eyes,” added Angel. “I felt extremely uncomfortable and disrespected.”

Angel said she issued a formal complaint to KLM when they arrived home but was told she needed to be “respectful of people of other cultures” and that the flight attendant’s response was in line with company policy.

"Instead of standing up for and protecting breastfeeding mothers and our children, already under the duress faced by flying with our young children, KLM would rather hold up antiquated values that shame women’s bodies,” Angel added.

The post has since garnered more than 1,000 reactions in total, most of which are shaming the company for shaming women's bodies.

As a result, the airline has issued a statement regarding their stance on breastfeeding while on board.

When speaking to Irish Tatler, a representative from the airline said: "Breastfeeding is permitted on board KLM flights. However, not all passengers feel comfortable with breastfeeding in their vicinity and sometimes these passengers complain to the cabin staff.

"To keep the peace onboard, in such cases we will try to find a solution that is acceptable to everyone and that shows respect for everyone's comfort and personal space. This may involve a request to a mother to cover her breast."

Although a completely natural and legal thing to do, mothers breastfeeding has often been looked upon with shame in Western culture.

A woman can breastfeed in the workplace or express milk, where facilities are provided. Alternatively, where there are no facilities made available, they can have their working hours reduced, without any loss of pay, to facilitate breastfeeding.

Dutch law (where KLM is based) boasts a similar legislation, stating that when an employee wishes to breastfeed her baby the employer must provide, for the first nine months after the birth, a suitable nursing room and allow for 25% of work time to be spent on feeding the baby or pumping while on pay.

While Western psyché will continue to shame women and their bodies for the natural bonding mechanism their systems provide, the only shame in breastfeeding is in the misogynistic attempt to turn the simple, free, loving and necessary act of feeding babies into a dirty secret.