Elvis, Burgers and Vintage Dior: What We Know About Lily Allen's Vegas Wedding

"...darling so it goes, some things are meant to be."
Irish Tatler Staff 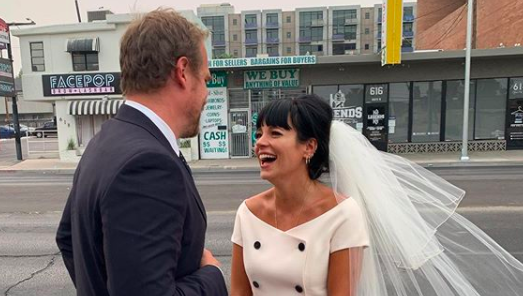 The topic of weddings has been one fraught with ambiguity for some time now given COVID-19, but it appears that it takes more than a global pandemic to put a halt on true love, according to Lily Allen.

The 35-year-old singer-songwriter managed to set the bar for pandemic weddings this week, as she and her beau David Harbour – best known as Chief of Police Jim Hopper on Stranger Things –got hitched in Vegas.

The pair went old-school by way of the legendary Graceland Chapel to be married by the king, or, more specifically, a renowned Elvis Presley impersonator.

They now join a number of celebrities to have wed or renewed vows at the chapel including Jon Bon Jovi, Billy Ray Cyrus, and Four Weddings And A Funeral actress Andie McDowell.

For the event, it's no surprise that Allen wore vintage. A renegade when it comes to fashion – lest we forget her iconic tea dresses paired with Air Max – the bride wore a belted ’60s-style Dior dress with a pair of suede Miu Miu platforms, carrying a bouquet of mauve and peach roses and baby’s-breath.

“In a wedding officiated by the king himself, the people’s princess wed her devoted, low born, but kind credit card holder in a beautiful ceremony lit by the ashen skies courtesy of a burning state miles away in the midst of a global pandemic,” Harbour wrote on Instagram.

“Refreshments were served at a small reception following.”

According to several news sources, Allen and Harbour have been dating for more than a year. Both have kept their relationship relatively low profile so far, appearing at several events together and sharing photos on each other's social media.

Back in July, the It's Not Fair singer shared a close-up shot of her engagement ring while on holiday in Capri on 27 July. When a fan questioned Allen about the large ring on her finger, she cryptically answered: "First rule of engagement club…"

It was on this very same holiday that she announced her first anniversary of being sober.

READ MORE: I Have Found The Answer To Unapologetically Glamorous Hair – And It's On Sale For €50

READ MORE: Why The Concept Of Gender Is Becoming Outdated