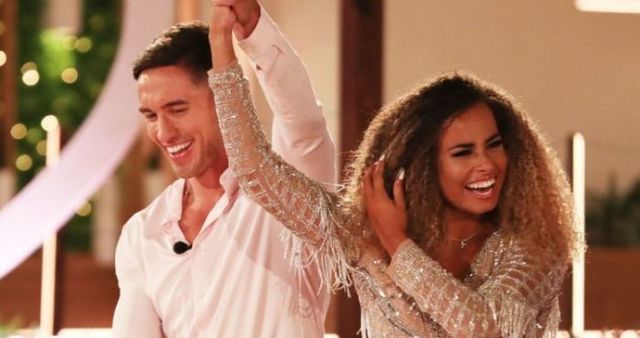 Greg O'Shea has confirmed that he and Amber Gill have split.

It was reported that the Love Island 2019 winners had called time on their relationship this week due to scheduling issues.

An insider told The Sun on Thursday that Amber and Greg have now split - after the rugby player is said to have ended their relationship by text.

They said: "Greg has broken up with Amber and is blaming their busy schedules and now they want to focus on their careers.

"Amber feels used by Greg. He was always aware of the distance and his career in their relationship, and yet he chose to seek out Amber in the villa knowing there would always be the distance.

"He hasn't made any effort to come to London to see Amber, despite it being over five weeks, it's always Amber who had to make the effort."

Greg – who appeared on Friday night's Late Late Show alongside Maura Higgins and Curtis Pritchard, who replaced Amber at the last minute – managed to clear up the rumours by revealing to Ryan the nature of the split.

The Sevens Rugby player cited distance and differing career trajectories for the reason.

"I decided to come back to Ireland and do my thing here" #LoveIsland winner @GOSofficialpage clears up those rumours about him and @AmberRoseGill. #LateLate pic.twitter.com/b4C1EVgZhJ

“Me and Amber have been chatting the last few days and the whole thing about [breaking up] over text isn’t true," he said.

“But we need to be realistic about the situation, and the fact she’s in the UK. We’re both so busy and we need to take these opportunities and protecting our careers.

"She has every brand wanting to work with her, and I’m trying to make the team for the Olympics with the Ireland sevens. It was over a long time, it wasn’t just one text.

“I’m mad about her, and I hope she’s mad about me too. Who knows what the future holds.”

While on the show, Greg also revealed that he will be teaming up with Doireann Garrihy to present the 2FM Breakfast show while Eoghan McDermott provides the voiceover for Love Island Australia.

“I am honestly over-the-moon to have the opportunity to work alongside Doireann while Eoghan is away. She is an amazing woman, so talented and I know I’ll learn loads from her! I will have to get a few tips from Eoghan on how to take on the early mornings but I’m really looking forward to giving it a go and having some craic," Greg said.

Greg will commence his co-presenting duties with Doireann on 23 September and continue until November 20.

READ: Zara's Latest Drop Is Basically Me Waving Goodbye To My Paycheque

READ MORE: You May As Well Start Test Driving These Autumn/Winter Trends