Back in 2019, McGuinness was re-elected as the First Vice-President of the European Parliament, securing 93% of votes cast. 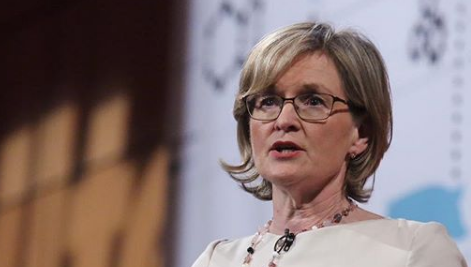 Mairead McGuinness has claimed prime position as the bookies' favourite to replace Michael D. Higgins when he steps down from the position as Uachtarán na hÉireann.

The Fine Gael MEP – who is currently serving as the Vice-President of the European Parliament – boasts odds of 9/2 from 10/1 with BoyleSports, deeming her the early favourite.

Should the Louth-native run, it would be her second bid at becoming President after she failed to secure her party's nomination – who went to Gay Mitchell – in 2011.

McGuinness was recently lauded for promptly cutting off Nigel Farage's microphone in a, quite frankly, arrogant display of flag-waving while in the EU chamber in January.

Making one final attempt to grandstand in the European Parliament, the Brexiteer, surrounded by associates in ties emblazoned with Union Jacks, encouraged his party members to act raucously as their last day of EU membership ran out.

MEPs had just voted overwhelmingly to endorse the Brexit agreement, giving a clear go-ahead to the departure of the UK from the EU.

The tone of the day was decidedly sombre for some, something Farage ignored wholeheartedly.

“We love Europe – we just hate the European Union,” he shouted, before he and his associates picked up the miniature Union Jacks they had brought in with them – flouting the rule that forbids national flags in the chamber – and began waving them furiously.

“If you disobey the rules, you get cut off,” McGuinness told him, switching off his microphone privileges.

“Put your flags away. You’re leaving, and take the flags with you if you are leaving now.”

Current President Michael D. Higgins must relinquish his role in 2025 when his second term is scheduled to come to an end.

Among McGuinness, punters are also speculating that Bertie Ahern and Emily O'Reilly – who are both backed at 10/1 – could be in the running.

O'Reilly is an author and former journalist who became Ireland's first female Ombudsman in 2003. On 3 July 2013, she was voted European Ombudsman by the European Parliament.

Other notable names in the frame include broadcaster Miriam O’Callaghan at 12/1, ex-Sinn Féin President Gerry Adams at 20/1 and former Taoiseach Enda Kenny at 25/1.

“Mairead McGuinness did have eyes on the Presidency back in 2011 so another bid would not come as a huge surprise," Lawrence Lyons, spokesperson for BoyleSports said of the odds.

"We have had to set her apart as the early favourite at 9/2 from 10/1 because there have been enough patient punters out there happy to snap up her odds and wait for their payday.”

READ MORE: A Magdalene Laundries Survivor Is Taking A Case Against The Irish State In The UN

READ MORE: Periods, Orgasms and The Olympics: The Secret Benefits Of Menstruation When It Comes To Sport