Currently, fathers or birth partners have been allowed into the labour ward or theatre but cannot attend any ultrasound scans or antenatal visits. 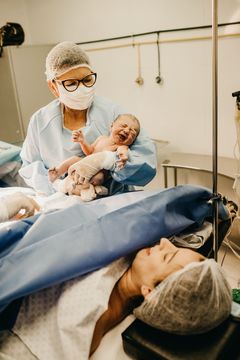 Some 23,000 people have signed a petition to lift maternity restrictions on pregnancy care amidst the COVID-19 pandemic.

The petition – hosted on Irish community website Uplift – wishes "to urgently remove the restrictions that deny fathers/partners the right to be present with a woman at her antenatal scans and appointments, and more importantly to be able to support her throughout the entirety of her labour and beyond one hour after the birth of the baby, for the duration of the hospital stay."

"We ask that these extreme restrictions be revised in light of the fact that the situation under which they were introduced six months ago has evolved, and that many other restrictions in general society have been eased, yet these ones which are causing severe unnecessary emotional distress have not been changed," it reads.

COVID-19 restrictions mean that many new parents have been completely separated, sometimes less than an hour after their baby is born. Even mothers facing miscarriages have been left, isolated from the people that love them the most.

“I am not suggesting large numbers of visitors be admitted to hospital wards," petition creator, Caroline Cummings says. "Nor am I wanting to put maternity hospital staff and patients under any greater risk.

"I am pregnant with my third baby and find it very difficult to accept that my husband can eat in a restaurant, go on a flight, coach GAA and drop my children to school, but not come with me to my 20-week scan in a few weeks, or come with me if I were to be induced again," she continued.

"I look back on the few days after the birth of both my babies in the hospital with my husband as some of the most magical and memorable days of my life, and the fact that he won't be there with me this time makes me so sad, and means I am not at all looking forward to the birth of this baby. In actual fact, it would probably push me to sign a self-discharge and go home.”

It was suggested earlier in the week that COVID-19 restrictions put in place in the National Maternity Hospital (NMH), the largest in the State, may be eased in the coming days, with Professor Shane Higgins stating that some restrictions on partners entering the hospital have already been eased.

Speaking to RTÉ Radio's Drivetime programme, Higgins, Master of the NMH, said that partners are now permitted to visit new mothers once a day and the neo-natal unit unrestrictedly.

He did this following prompt from Lord Mayor of Dublin Hazel Chu, who wrote to the masters of the three main maternity hospitals asking them to ease restrictions on partners. Mayor Chu did so following a tweet by 'gentle birthing' instructor Sarah Flynn which garnered an emotional reaction.

"Have just received a message from a pregnant lady which has broken my heart and I couldn't not try and raise her points as they are very valid," she wrote.

"This lady today had a very difficult appointment, alone without her partner. She felt her care was cold…and said she left the appointment and cried in her car. I know she is not alone - I speak to these women every single day.”

Flynn said many women have experienced similar situations and struggled “to understand the ongoing restrictions” on partners accompanying them at maternity hospitals when they could go together to cafes or weddings.

Earlier this week, Sinn Féin North Kildare TD Réana Cronin said the restrictions “are straight-up bonkers” given that pubs are reopening, suggesting that it seemed “more important for a father to be able to wet his baby’s head rather than to see his baby’s head”.

She subsequently proposed a solution which would allow partners, fully clad in PPE, in for a half an hour at a time during labour and for an hour when labour ended.

Social Democrats Cork South-West TD Holly Cairns also highlighted the case of a woman who had an emergency caesarian section and went through the entire labour, surgery and five days in the hospital without any support. According to Cairns, her husband only met the baby after they were discharged.

She referenced that in some cases pregnant women were receiving bad news and had to phone their partners sitting outside in the car in “heart-breaking” situations.

Minister of State for Health Mary Butler insisted there could not be a one-size-fits-all approach to visitor restrictions which were decided at local level and regularly reviewed and aimed purely at protecting women and their babies.

“These restrictions are reviewed on a frequent basis and will be lifted as soon as hospitals believe it is safe to do so," she said.

READ MORE: Those Trying To Get Pregnant Should Abstain From Caffeine Entirely, New Study Suggests