After months of laying low, the Duke and Duchess of Sussex are showing up and giving back.
Irish Tatler Staff 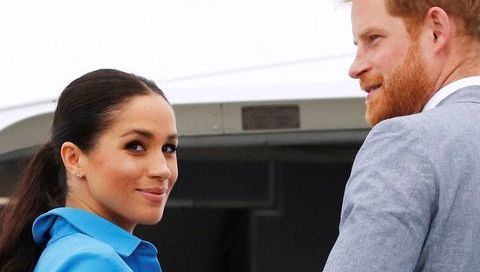 The former senior royals this week stopped by Homeboy Industries, a nonprofit that works to improve the lives of the formerly incarcerated in Los Angeles.

The organisation provides services such as legal assistance, addiction recovery support, job support, as well as employment opportunities through their own social enterprises, two of which are the Homeboy Bakery and Homegirl Café.

Harry and Markle spent their visit in both cafés, chatting with staff and cooking meals which would then be delivered to those at risk within the community.

Thank you to Harry and Meghan, The Duke and Duchess of Sussex, for visiting and standing in kinship with our Café and Bakery teams yesterday! Our staff was thrilled to work alongside them as they helped prepare food and learned more about our newly launched #FeedHOPE program, which employs our program participants to provide meals to food-insecure seniors and youth across Los Angeles in the wake of the #COVID19 pandemic. ⠀⠀⠀⠀⠀⠀⠀⠀⠀ For 32 years, Homeboy Industries has stood as a beacon of hope in Los Angeles to brave men and women seeking to transform their lives after gang-involvement and incarceration. Each year, we provide support to nearly 9,000 individuals through job training and free services such as tattoo removal, mental health services, GED classes, legal services, and more. Above all, we provide space for our clients to heal from intergenerational cycles of violence in a community of radical compassion. ⠀⠀⠀⠀⠀⠀⠀⠀⠀ If you’d like to help provide second chances to brave men and women and their families, visit our website and stand with us at the link in our bio. ⠀⠀⠀⠀⠀⠀⠀⠀⠀  Credit: The Duke and Duchess of Sussex.

According to Father Greg Boyle, founder of Homeboy Industries, it was a low-key visit: “The Duke and Duchess of Sussex were just Harry and Meghan to the homies. They rolled up their sleeves and deeply engaged with our workers.” (It likely helps that Markle has known Boyle for awhile—20 years ago, she attended one of his Homeboy cooking workshops with her mother, Doria Ragland, where they made tamales.)

The visit highlighted a number of social issues close to the couple's hearts; recidivism, inequality and giving back to the community.

Just this week, it's been reported that Harry and Meghan have signed with the Harry Walker Agency, the chosen representatives for the Obamas, the Clintons, Jane Goodall, Oprah Winfrey and more.

Their speaking engagements will reportedly focus on racial injustice, environmental conservation, gender equity and other social issues, in addition to mental health, a longstanding cause championed by the royals.

The LA Times reports that they will not, however, be addressing the royal family during any events.

The outlet reports that becoming public speakers can certainly help the pair to attain financial independence as they said they planned to do, as former President Barack Obama reportedly earned $400,000 for an engagement in 2017 while in 2014, the Clintons averaged $250,000 per appearance.

The couple stepped down as senior royals back in January, meaning that they would no longer receive public funds for their work.

The two had originally planned to launch a new venture under the name Sussex Royal but, after negotiating their exit, they had to abandon that name and the associated — and hugely popular — Instagram account. More recently they have named their foundation Archewell.

Earlier this month, the former actress shared her sadness over racial divisions in the U.S., telling graduates at Immaculate Heart High School in Los Angeles that she felt moved to speak out after the death of George Floyd at the hands of a Minneapolis police officer.

Markle, who has an African American mother and a white father, said she had been reminded of the 1992 L.A. protests that arose in the wake of the acquittal of police officers after their beating of Rodney G. King.