Miss World Had Her Crown Taken Away Because She Is A Mother – Now, She's Taking Legal Action

Four days after model Veronika Didusenko won the title of Miss Ukraine in 2018, Miss World officials took away her title after they discovered she is a mother, which violates the pageant's rules. 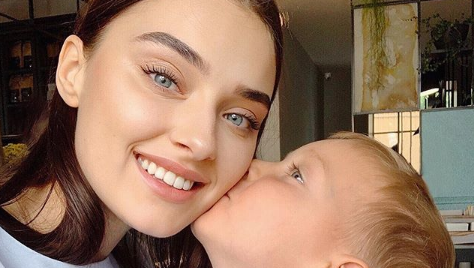 Upon entering the pageant, she expressed an awareness of the current policy but was encouraged by pageant organisers to enter anyway.

The rules of the competition ban anyone from taking part in the Miss World franchise if they've got children.

Now Veronika, who has a five-year-old son, has decided to change that.

Speaking to BBC's Cherry Wilson on Radio 1's Newsbeat, the 24-year-old spoke of her plans to take legal action against the contest over its policy.

"I want to change them, challenge them. I want to make sure the rules of Miss World move with the times," she tells Wilson.

"I want to make them more fit for nowadays and reflect women's reality today - who can perfectly balance between their careers and their personal life."

"Why should a woman be excluded from entering just because she's a mother? It doesn't make any sense."

The former Miss Ukraine explained she entered the pageant to raise her charity's profile and was surprised when she was crowned the winner.

Her plans were to then continue onto the international Miss World content, until four days later when she was disqualified.

Didusenko made the announcement to challenge Miss World in an Instagram post on Saturday, not long before this year's Miss World pageant finale, which takes place in London on December 14.

"Today #righttobeamother has made a huge leap forward," Didusenko wrote on Instagram. "I have launched a legal challenge against Miss World and this marks the new phase in our joint fight for justice."

"We say that under the Equality Act 2010 the entry policy operated by Miss World is discriminatory on various grounds, namely marital status, and pregnancy and maternity," she continued.

"The Equality Act protects against discrimination based on certain characteristics, including marriage, maternity and sex."

The Equality Act, which went into effect on October 1, 2010, contains nine pieces of legislation that provide the UK with a "discrimination law which protects individuals from unfair treatment and promotes a fair and more equal society."

In her Instagram post, Didusenko added that she does not want her crown back, but instead wants "to get the rules changed for wider society."

Closer to home, rules were changed in 2008 that allowed for single mothers to enter the Rose of Tralee competition, held in Kerry every year.

Prior to this, the festival's chief executive Liam Twomey defended the decision to exclude single mothers by saying that the competition was based on the legend of a single woman, Mary O'Connor, who had no children and who was in love with the writer of the song.

Current rules stipulate that entrants must not be married now or in the past or older than 28 years of age. They are also expected to have a male escort for the duration of the festival.

READ MORE: A 'New Approach' Will See Parishes Prepare Children For Sacraments Instead Of School