Could Today Be The Day Abortion Legislation Changes In Northern Ireland?

At this moment in time, it is still illegal for women in Northern Ireland to procure an abortion, unless in exceptional circumstances. 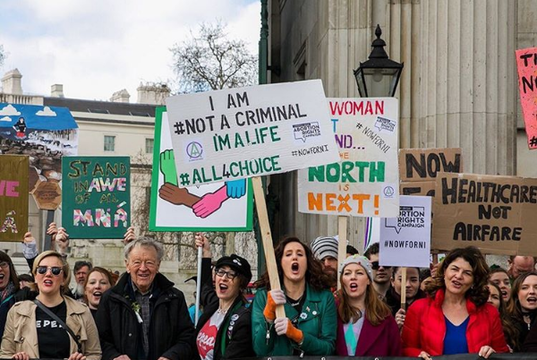 Save for allowing people to travel to England for an abortion on the NHS, Westminster has so far failed to alter the situation.

According to them, abortion is a devolved power, meaning it is up to the Northern Irish Assembly to change the law. But campaigners have argued that, since Stormont hasn't been functional since 2017, it is Westminster's responsibility to start making progress.

Thanks to campaigning efforts, MPs will now be voting on Northern Ireland's abortion legislation on Tuesday, July 9.

The vote is being led by Labour MP Stella Creasy, who, according to the Guardian, recently tabled an amendment supported by up to 60 cross-party politicians arguing that the current legislation complies with human rights obligations.

As it stands, abortion is legal under certain circumstances in England and Wales and Scotland based on the Abortion Act 1967, then one of the most liberal abortion laws in Europe when it was enacted.

We did it! Thank you to everyone who has donated so far & taken us over the £15k mark. Your support means we can now get started on our case against the UK Government for their failure to provide safe abortion access to people in Northern Ireland.  See you in court! #Nowforni #now4ni #hometovote #freesafelegal #abortionrights #abortionrights

NI is still bound by the Victorian-era 1861 Offences Against the Person Act and bans abortion in almost all circumstances, including rape, incest and fatal foetal abnormality. It provides for severe penalties including life imprisonment.

For the law to change, two things have to happen:

“According to the [United Nations], women in Northern Ireland face ‘grave and systematic’ human rights violations because we treat them as second class citizens and deny them their basic human right not to be forced to continue an unwanted pregnancy," Creasy said in a statement.

“With women facing jail now in Northern Ireland and no sign of an assembly anytime soon at Stormont, this vote is a chance for Parliament to uphold our human rights obligations and treat every woman in the UK with equal respect by ensuring they can access a safe, legal, and local abortion if they want to do so.”

To encourage MPs to participate in the vote and make the right choice, BPAS is asking those in Northern Ireland and the UK to email their local representative.

The organisation has done all of the hard work, setting up a service that allows an email to be automatically sent. All you have to do is enter your postcode and a few personal details.

It's simple, quick and far easier than travelling abroad to obtain a medical termination.