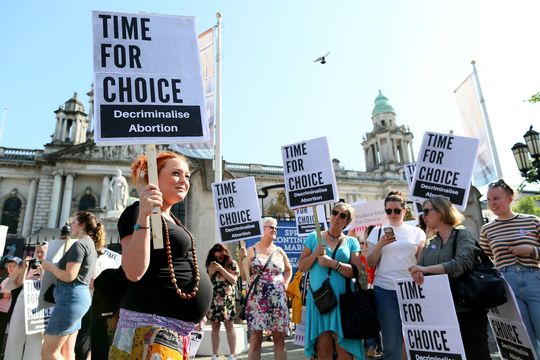 "Women shouldn't be forced through our courts to have their rights realised."

The publication of Northern Ireland’s Department of Health’s annualtermination of pregnancy statistics has revealed that more than 900 women travelled to England and Wales during last year to terminate pregnancies and just 12 abortions were carried out in Northern Ireland in 2017/2018.

In response to this, Amnesty International’s Northern Ireland Campaign Manager Grainne Teggart referenced the limiting nature of the service in comparison to the Republic's new legislation.

"This demonstrates just how restrictive and unfit Northern Ireland’s abortion law is. Because of the near-total abortion ban in Northern Ireland, up to one thousand women fly to other parts of the UK to have abortions every year.

"Countless others go online to purchase abortion pills, risking prosecution in doing so.

“How can it be the case that it’s ok for women to fly to England, or now get a train to the Republic of Ireland to have an abortion, but it’s not OK for them to access the health service at home? It makes no sense. It’s time the UK Government ended the hypocrisy and inequality.

“Northern Ireland has one of the cruellest abortion laws in the world, and our reproductive rights are falling further and further behind.

“The UK Government cannot ignore the grave situation for women here. Abortion must be decriminalised - made free, safe and accessible without having to travel.”

However, Britain’s relatively liberal 1967 abortion Act was never extended to the North, where abortion is illegal in most circumstances, applied under a law made in 1861.

On Wednesday, Amnesty will give evidence to the Women and Equalities Committee as part of its inquiry into the abortion law in Northern Ireland.

They plan to urge the Committee to finally bring an end to the archaic law which harms women by recommending that the UK Government decriminalises abortion, and puts in place a human rights compliant framework for access.

On 29 January, Northern Ireland resident and abortion rights campaigner Sarah Ewart will appear before the High court in Belfast to present her case that women in Northern Ireland should have access to rights enjoyed by women in all other parts of the United Kingdom.

Five years ago, aged just 23, Ewart travelled to an abortion clinic in England to terminate a much-wanted pregnancy that was otherwise going to end with the birth of a baby with a foetal abnormality.

Her lawyers argued that the current regime breaches Article 8 of the European Convention on Human Rights, dealing with entitlements to private and family life.

READ MORE: A Number Of Cervical Smear Tests To Be Repeated As They Have Expired